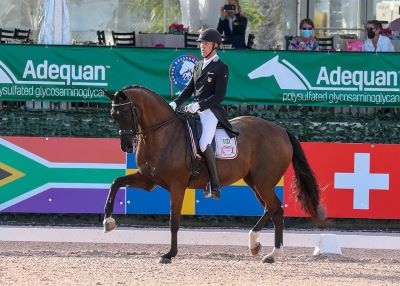 In their first freestyle performance together, Seidel and Leatherdale Farms and Louise Leatherdale’s 2009 KWPN mare by Florett AS earned a 75.830% from judges to top the class.

“It was our first freestyle,” he began, “so I was a little conservative and kept everything fairly easy. Our floor plan was fairly easy. She’s a very hot horse and has had her issues in the ring, so I wanted to use this test to give her some confidence out there. The more it went along the more secure she seemed to get, and she was really fun to ride. Most of the test was very pleasing. I know there’s quality in there, but sometimes that’s hard to show because she can get tight or scared, but it was nice to see that she is learning how to hold it together. It was not easy for her with the wind, but I was very happy with her.”

Seidel rode the mare to a freestyle he used with a previous horse, but noted his method for getting Equirelle more experience before they dive into creating a freestyle of their own. “The music is from a horse I’ve ridden before,” he explained. “I figured I’d get her feet wet in the freestyle before I created an entirely new one. I really like the music so it works well with her for now.”

The partnership is only a few years old, and Seidel explained that his current plan with the mare is to help her gain experience throughout the remainder of the AGDF circuit. “I’ve had her for a couple of years,” he said, “and she is a very generous horse. She doesn’t want to make mistakes, but she gets hot. I think it takes time to get into a successful partnership with a horse like that at this level, but I feel like she will be a very good horse in a few years. I am going to use the shows here to get her seasoned and get her more confident in the ring. If it backfires and she starts to get nervous I will back off, but if she keeps going like this, we will keep competing.” 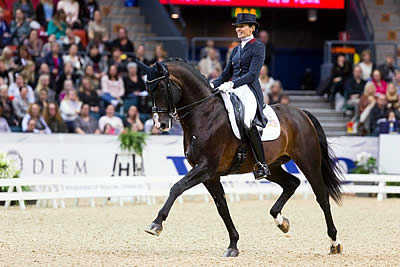 Following Friday’s Grand Prix performance that earned them a score of 71.114%, Jorst (Reno, Nev.) and Kastel Denmark’s 2003 Dutch Warmblood stallion, Kastel’s Nintendo, entered the ring this afternoon as the fifth combination in the order. The pair performed their Freestyle featuring the songs ‘Time to Say Goodbye’ by Andrea Bocelli and Sarah Brightman and ‘Fight Song’ by Rachel Platten. In its debut Final, the pair finished the feature class in 12th place on a score of 73.232%.

“It was so fun. I was very happy with that [test] being my first time in an arena like that. He is such a great horse and I am so happy with him,” said an exuberant Jorst.

Jorst, who has only been riding at the top levels of the sport since 2012, rode her first Grand Prix Freestyle in FEI level competition just two years ago. Relating the highlights of today’s test, Jorst said, “I was really happy with how confident I feel about my changes. They have been something I have been challenged with in the past. For someone who has never done a single one until two years ago, it was a big learning curve and something I really had to work on. Now they are just there and it makes me so happy.”

Entering the arena first for the U.S. was Seidel (Cardiff, Calif.) and James and Charlotte Mashburn’s 2004 Dutch Warmblood gelding, Zero Gravity. In Friday’s Grand Prix, Zero Gravity was a bit overwhelmed with his first trip into an electric indoor arena and scored a 69.800%. Unfortunately, the gelding was not able to overcome his nerves after a polite clap from the audience at his entrance and performed a tense test to score a 67.464%.

“After the clapping he just felt so explosive, but considering that, he actually pulled together a lot of the movements okay,” said Seidel.

Even through the moments of tension, the pair was able to beautifully execute the tempi-changes. The gelding has only been competing at the FEI level since 2015 and gained valuable experience this week in his first FEI World Cup Final™.

The day belonged to Hans Peter Minderhoud of The Netherlands, who earned a score of 82.357% with Glock’s Flirt to claim the 2016 Champion title. Finishing in second place were Tinne Vilhelmson-Silfvén of Sweden and Don Auriello on a score of 81.429%. Third place went to Jessica von Bredow-Werndl of Germany with Unee BB, scoring 80.464%.

“Guenter didn’t need to compete Fandango because he had already qualified him, but he wanted the show spectators to have a great experience so he came out on Saturday night and gave an Olympic-worthy performance. The audience was thrilled and very appreciative and it was really an exceptional thing for Guenter to do,” said Heidi Zorn, President of Premier Equestrian, LLC, a leading supplier of dressage arenas, horse jumps, arena footing and stable accessories. “We presented Guenter with the Premier Sportsmanship award for his upstanding level of sportsmanship, but it extends far beyond performing his musical freestyle. Guenter was also extremely courteous to the office staff and fellow competitors – he is a true sportsman all the way around.”

END_OF_DOCUMENT_TOKEN_TO_BE_REPLACED

Thank you USEF Facebook fans for your questions for Guenter Seidel. For the next “10 Questions With…” please visit www.facebook.com/USEquestrian.

Guenter Seidel is a native of Germany who moved to the U.S. in 1985 and has contributed significantly to U.S. dressage. Seidel helped the U.S. win the Team Bronze medal at three consecutive Olympic Games – 1996, 2000 and 2004 – with three different horses. He also was on the Silver medal team in 2002 and the Bronze medal 2006 team.

Both 2009 and 2010 brought more milestones for Seidel, but tragedy struck in June, when he was thrown from his horse U II. Seidel fractured his pelvis and could not walk without crutches for two months. In just a year, though, Seidel made an incredible recovery. After a third-place finish in the grand prix in Hamburg in June this year, he topped the field in the freestyle with a score of 73.400% – on U II. Later that month at the CDI Fritzen in Austria Seidel finished second in the Grand Prix – Consolation class on Sundayboy with a 70.390%. He finished strongly in the Grand Prix for Freestyle coming in third with U II with a score of 70.745%. To top off the weekend, he and U II took top honors in the Grand Prix Freestyle after scoring a remarkable 78.27%.

END_OF_DOCUMENT_TOKEN_TO_BE_REPLACED

Lexington, KY – The United States Equestrian Federation (USEF) will be represented in four disciplines at CHIO Aachen, which runs July 8-17, 2011 in Aachen, Germany. Please click on any athlete or team name for more information about them.

The following horse/rider combinations have been named in ranked order to represent the U.S. in Dressage:

END_OF_DOCUMENT_TOKEN_TO_BE_REPLACED

The World Dressage Masters in Palm Beach, Florida and Dressage Affaire in California are the focus this week with Guenter Seidel, Sara Leiser, and Mary
Lauritsen, so tune in right here…