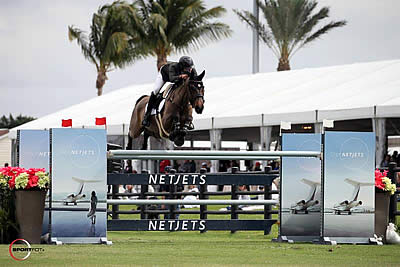 The biggest jumper class of the week was held on the beautiful grass derby field, and 44 entries went to post in the first round over a course designed by Anderson Lima of Brazil. Nine were clear and advanced to the jump-off.

Sixth to go in the jump-off and setting a new leading time was Margie Engle (USA) on the 18-year-old KWPN gelding by Indoctro x Dutchman, Indigo. Looking half his age, they flew around course in a time of 44.30 seconds, which would hold up for third place.

Immediately following in the jump-off was Beezie Madden (USA) on Con Taggio, a nine-year-old Oldenburg gelding by Contagio x Golliath Life owned by Abigail Wexner. It was the horse’s first ever grand prix, and he rose to the occasion. They recorded a new leading time of 43.48 seconds, and eventually finished second.

Taking the lead as the next horse in the ring, Bluman and Sancha LS, a 15-year-old La Silla-bred mare by Chin Chin x Polydor, brought the winning time down to 43.39 seconds.

Grace Tuton, of Scottsdale, AZ, rode her mount, Sorbet, owned by Nicodemus Farms, to the top of the class on Saturday in the Lugano Diamonds Amateur-Owner Hunter 3’6” 18-35 division. Tuton and the 13-year-old grey mare secured the championship win with a first in the under saddle and a second, third, fourth, and sixth over fences.

Saturday’s championship win was an exciting highlight for Tuton, as this is her first year competing as an amateur and exhibitor at the Winter Equestrian Festival. The young rider impressed throughout the morning and took ribbons on two other entries in the division, Bozeman and Gelato, both owned by Nicodemus Farms. However, Tuton stayed true to character on Sorbet, also known as Soba, and expressed her delight with the mare’s ride today in the E. R. Mische Grand Hunter ring.

On Saturday night, Palm Beach County cheered as the Great Charity Challenge, presented by Fidelity Investments® (GCC), distributed $1.5 million to local non-profit organizations at the Palm Beach International Equestrian Center (PBIEC). The GCC has become a highlight of the 12-week Winter Equestrian Festival (WEF) and has distributed over $12.2 million to more than 220 local organizations in nine years.