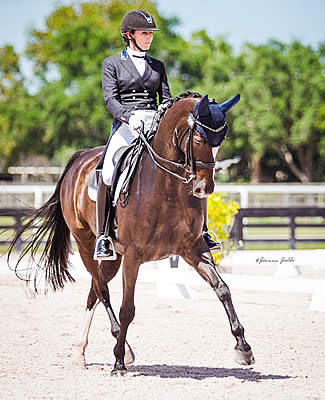 Shannon Dueck and As You Wish (photo by Joana Jodko)

Wellington, FL (April 2019) – Every ending is a new beginning, as the saying goes, which is especially true in Wellington, Florida when the winter season ends with the Gold Coast Dressage Association (GCDA) Season Finale 1 and 2 shows. These shows not only spotlight some of the best dressage riders and horses in the world, it also signals that the robust summer dressage season is officially underway in South Florida. GCDA President and Finale Show Manager, Noreen O’Sullivan, states it best: “It’s the finale of the winter season, but really, it marks the beginning of our summer season,” she says, “So, as a close-out to the end of the season, we had three show rings over the weekend with a very wide representation of rides across all levels. We had some really nice up and coming young horses, and some new horses for people, and some very cool personal bests at the shows this year.”  O’Sullivan goes on to explain that the finale actually counts as two one-day shows, with one being a young horse qualifying show for North American Youth Championships (NAYC) and also for Lamplight.  The impressive display of equine athletes and their elite riders was one that could only be found in April in Wellington, Florida, which was reflected in the scores and many awards presented during the shows. Highlights of the finale included outstanding performances and special recognition for riders Bent Jensen, Kelly Lane, Cesar Parra, Heather Bender, Shannon Dueck, and Ali Potasky.

Olympian Bent Jensen was awarded the Diana Zakharova International Sportsmanship Award during the finale to recognize his competitive spirit, effort, and fine horsemanship that he brings to Wellington as an international rider. Jensen is originally from Denmark and has been in the US for 30 years. Starting out as a champion show jumper, Jensen made the switch to dressage, which lead to a trip to the Olympics in 1992.  Today, Jensen trains out of Blue Marlin Farm in Little Ranches. His performance on his beloved mount, Chance, during the finale demonstrated his love and commitment to the sport of dressage. Diana Zakharova is also a well-known member of the Wellington dressage community who is originally from Russia. She created the award to celebrate her fellow international riders.

Also receiving special recognition was Kelly Lane for winning the USEF Third Level-Test 1 on her horse, Rockpool, with a score of 72.838%. This class was sponsored by equine health company, Omega Alpha, and Lane was presented with a lovely prize package which included an assortment of popular Omega Alpha all-natural health products.

Heather Bender also rode away with a personal best score in the FEI Grand Prix when she and the gorgeous Zairo Interago rocked a 72.500%, and Shannon Dueck was thrilled when her wishes came true with a high score of 81.200% in the FEI Young Horse on her 7-year-old Hanoverian gelding, As You Wish (a.k.a. Westley).

The most jaw-dropping score awarded during the finale went to Ali Potasky for her ride on Irintha in the FEI YH Test for 6-Year-Old. The pair landed a whopping 87.4% for their performance, and once again, proved the level of excellence that can be found in this world class competition hosted by the GCDA.

The Gold Coast Dressage Association is a USDF Group Member Organization that is committed to providing educational programs, clinics, shows, and seminars aimed at promoting and upgrading classical riding, and to offer a framework in which individuals can progress with the schooling of themselves and their horses.  The 2019 GCDA show season originally kicked off with the Gold Coast Opener held on January 17-20 at The Global Dressage Stadium at the Palm Beach International Equestrian Center (PBIEC) in Wellington, Florida.

Coming up quickly is Gold Coast May Dressage, to be held on May 18-19 at the Palm Beach Equine Sports Complex.  GCDA President Noreen O’Sullivan is excited to see what this show and the rest of the year holds for all members, and she thanks all of the valuable sponsors for their support. She also wishes members and all show competitors the very best for them and their wonderful dressage horses for the rest of 2019 and beyond.  For more information about the GCDA and upcoming shows, visit www.gcdafl.org. 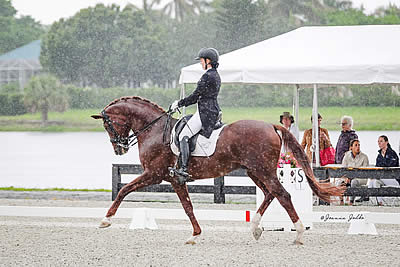 Dancing their way to a win in the Grand Prix Freestyle, Katrin Dagge and Dream of Love. (Photo courtesy of Joanna Jodko Photography)

This show featured two international 4* judges, Marian Cunningham and Claudia Mesquita, and USDF “S” judge Sandi Chohany.  Chohany celebrated her birthday during the show, and the show staff got together to celebrate after the day’s work was finished.  With over 106 entries and 184 rides it comes as no surprise that big names such as Adrienne Lyle, Kelly Lane, Marco Bernal, Nicholas Fyffe, Chris Von Martles, Shannon Dueck, and Para Equestrian superstars Roxanne Trunnell, Rebecca Hart, Kate Shoemaker, and Eleanor Brimmer came to support the show.  The highest score ride of the show came from Shoemaker aboard Solitaer 40 riding in the Para Equestrian IV Individual Test, scoring a 76.829%. To see more, follow this link: https://www.youtube.com/watch?v=JXxyUOa7x_g.

Noreen O’Sullivan is the busy president of the Gold Coast Dressage Association and manager of the May Dressage show. “We have a really action-packed show, with several FEI riders coming here looking to qualify for the upcoming Central American games. GCDA Secretary Amy Swerdlin & the Palm Beach Equine Sports Complex staff have done a fantastic job as our host facility, with excellent footing, a covered arena, an updated sound system for top notch freestyles and permanent stabling; it makes for fun, friendly shows year-round.” O’Sullivan says the Gold Coast Dressage Association also organizes educational events. “We are going to be doing a USDF educational session in July.” To check out the shows results or see what’s coming up, follow this link: http://www.gcdafl.org/2018_shows_may_dressage.htm.

The 24-year-old Marshall, an accomplished equestrian, stars in the long-running hit TV series “Heartland” and will join guests at The Player’s Club in Wellington on Saturday, Feb. 23 at 7 p.m.

Admission is free but donations will be accepted at the door. There will be a complimentary, light buffet along with a cash bar and door prizes.

All proceeds and donations go to Gold Coast Dressage Association to benefit para-riding, a program designed so a person with a disability can compete in an exciting and well-respected sport as an athlete and be judged on their abilities.

Now in its sixth season, Heartland has captured the hearts of millions as the characters have introduced viewers around the world to the passion and tradition horses have in people’s lives, whether it’s dressage, show jumping, rodeo or polo.

END_OF_DOCUMENT_TOKEN_TO_BE_REPLACED

Rains was thrilled to win the Rock Star Award with Samir’ Sandro. “We have been doing this freestyle for about a year and the music really matches his personality,” Rains said. “I took the pattern to a musician, who didn’t know anything about dressage, but he put the music together and I really like it.”

END_OF_DOCUMENT_TOKEN_TO_BE_REPLACED

Wellington, FL (February 7, 2012) – Thanks to the efforts of the show management team from the Gold Coast Dressage Association and the Wellington Dressage Classic Association, the 2012 Dressage season kicked off with three amazing CDI events in January and 2 Paralympic Qualifiers. With world-class dressage riders providing an air of European competition, the Gold Coast Dressage Association’s Opener CDI W/CDEDI3* January 19-22, 2012, the Wellington Classic Sunshine Challenge CDI3*/CPEDI3* January 25-29, 2012 and the 2012 Palm Beach leg of the prestigious World Dressage Masters presented by the Axel Johnson Group set the tone for a fantastic Wellington dressage season.

Wellington Classic Dressage once again hosted the World Dressage Masters Palm Beach with International Polo Club as Presenting Sponsor.  The Masters proved to be a record setting event for the Jim Brandon Equestrian Center, with dressage star Steffen Peters setting the dressage ring on fire with record breaking scores, while the number of spectators also proved to be at an all-time high. “This year’s Masters was one for the record books,” said John Flanagan of Wellington Classic Dressage, Gold Coast Dressage, International Horse Sport, and one of the organizers of the WDM Palm Beach. “The competition was amazing and a record number of people were able to watch this event live, which is a great testament to the strength of our sport in South Florida and the United States.”

END_OF_DOCUMENT_TOKEN_TO_BE_REPLACED

Wellington, FL (November 10, 2011) – Barcida Interagro, a beautiful five-year-old grey Lusitano stallion owned by Cindy Barrera and ridden by Heather Bender, won the Lusitano High Score of the Year Award during the Gold Coast Dressage Association year-end banquet and also rode away with the USEF High Score of the Year for all breeds. Barcida’s score of 77.200% helped the stallion clinch the prestigious titles.

Barcida was imported from Interagro Lusitanos in Brazil, the world’s largest breeder and exporter of Lusitano horses, and purchased in the February 2010 Lusitano Collection auction. “Barcida has been in consistent training with me since his arrival in the United States,” said Bender, an FEI rider and trainer. “Barcida is an extremely talented, healthy and valuable stallion that has everything most competitive riders look for. His show record is off to an amazing start and he has received 9’s for his walk and 8’s for the canter! He is an extremely trainable stallion with a super temperament and is currently schooling Third Level and doing a single flying change. Barcida Interagro not only has competitive beautiful gaits against any breed, but he is unbelievably comfortable to ride. His temperament makes him well suited for an amateur in a guided professional program.”

END_OF_DOCUMENT_TOKEN_TO_BE_REPLACED

Thousands of horses and riders converged in West Palm Beach Florida from around the world to compete once again this winter, making this season the richest and most successful season ever for Dressage in Florida.  The ever-popular Wellington Classic Dressage (WCD) and Gold Coast Dressage Association (GCDA) shows at the beautiful Palm Beach County Jim Brandon Equestrian Center were joined this year by International Horse Sport Palm Beach (IHS) shows at the Equestrian Estates Horse Park.  Combined, these three Dressage organizations host more than 23 weeks of competitions year-round, including 6 International CDI competitions.

The premiere event of the winter season was clearly the World Dressage Masters CDI5* Series Presented by Axel Johnson Group.  The World Dressage Masters is one of the richest Dressage Series internationally, with only 4-6 shows hosted around the world, each boasting over 100,000 Euros in Prize Money (approximately $140,000).  The WDM CDI5*Palm Beach Show was hosted March 9-12, 2011 by Wellington Classic Dressage, with International Polo Club as Presenting Sponsor.  “We are honored to host this very prestigious show for 2011 and beyond, and to work with the WDM team and IPC to make this year’s event a resounding success,” stated John Flanagan, Managing Partner for Wellington Classic Dressage.  What an honor too, that America’s top rider, Steffen Peters on Ravel, owned by Akiko Yamazaki, took home the top prize by winning the WDM Grand Prix Freestyle with a score of 84.53%, followed by Sweden’s Tinne Vilhelmson-Silfven on Favourit with 77.90%, and US Rider Tina Konyot and Calecto V with 76.65%.  The 2012 WDM CDI5* Palm Beach is slated for January 26th-29th, 2012.

Wellington Classic Dressage’s eleven-show series kicked off high season with the Wellington Classic Holiday Challenge in December and wrapped up the winter season with the Wellington Classic Challenge III on the 1st of May.  The WCD series is held at the very popular Jim Brandon Equestrian Center, which boosts excellent footing and stabling, several competition rings, including a covered arena, riding trails and a Western Events area on over 111 acres.   Gold Coast Dressage Association, the local GMO hosted their centerpiece show also at Jim Brandon, the GCDA Opener CDIW.  International Horse Sport hosted Florida’s traditional favorite and longest-running CDI, the Palm Beach Dressage Derby CDIW, as well as 4 other shows at the beautiful Horse Park at Equestrian Estates in nearby Loxahatchee, which this year underwent many upgrades and improvements.