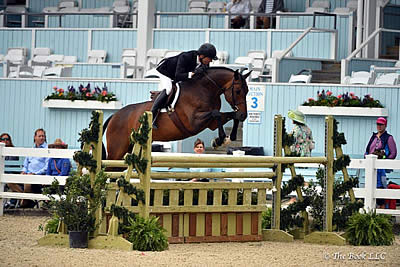 Devon, Pa. – May 31, 2017 – Scott Stewart of Wellington, Florida has been coming to the Devon Horse Show for many years to compete in the professional hunter divisions, but despite winning at the event countless times, the prestige of coming to the historic horse show and earning the Devon Leading Hunter Rider award continues to be a special accomplishment for him.

On Tuesday, the pair received two high scores of 92 to claim both blue ribbons in the over fences rounds. The duo topped the handy round on Wednesday, finishing with an impressive score of 89, took third place in the stake class with a score of 89 and also nabbed the undersaddle. Originally a breeding stallion in Europe, Stewart spotted the now 10-year-old Warmblood gelding in 2013 and knew he had the potential to prosper in the hunter ring. Stewart only brings him out to compete a few times each year at the country’s foremost venues, and Devon is one of them.

In addition to Cameo, Stewart campaigned three other Dr. Parker-owned horses in the Dixon Oval: Private Life, Lucador and A Million Reasons. While Lucador shows in the High Performance Conformation Hunter division, Private Life is known for being a winning combination with Stewart in the Green Conformation Hunters. A Million Reasons achieved not only top ribbons in the High Performance Working Hunter division at the 2017 Devon Horse Show, but was also called into the winner’s circle to take the Leading Mare award and the “Bunty” Sellers Perpetual Trophy for the second year in a row.

To make his victories that much sweeter, Stewart accumulated the most points to secure the highly-coveted Devon Leading Hunter Rider award and the Helen Hope Montgomery Scott Perpetual Trophy for the thirteenth time.

Ladies Day at the Devon Horse Show and County Fair featured a long-standing tradition: the Ladies Side Saddle championship. The hunter hack and over fences classes were featured in the Dixon Oval during the day on Wednesday, and competitors returned later in the evening to compete under the lights for the final under saddle class before pinning the champion. Ultimately, the True Blue Challenge Trophy was awarded to Gillian Beale King and Natalie Peterson’s Alta Mira.

It has been a dream of King’s to earn a Devon tricolor since she first started coming to the Devon Horse Show when she was a little girl. King and Alta Mira finished off the division with a first, second and third place ribbon. Debra Taylor and Hypnotic earned the reserve champion tricolor to round out the division.

Side saddle has been a part of the Devon Horse Show tradition for as long as anyone can recall. The style of riding was first introduced in Great Britain by Anne of Bohemia in 1382, at the time of her marriage to King Richard II. It introduced a more independent way of travel, since travel was primarily through cart or carriage back then.

Budweiser Clydesdales to Perform at Devon

The world-famous Budweiser Clydesdales will be performing at the Devon Horse Show and Country Fair on Friday, June 2, and Saturday, June 3, weather permitting. The Clydesdales will parade around the Dixon Oval, pulling the Budweiser wagon with the signature Dalmatian dog riding along.

The hitch that will be performing at Devon this year comes from Merrimack, New Hampshire and there are 10 Clydesdales with the crew. Eight horses go out on the hitch each day, with two resting per day. The New Hampshire hitch is one of three traveling hitches, while the other two are based out of Colorado and Missouri.

This hitch travels 10 months out of the year and they will stay at Devon until the final day of the show. From here, the hitch goes back to New Hampshire to rest before heading back out on the road to perform in York, Pennsylvania and Johnstown, Pennsylvania.

This year, while the “East Coast Hitch,” as they are commonly known, has been at Devon, they have also been attending other events in the area. On Memorial Day, the crew went to the Pottstown Memorial Day Parade. The day before, they attended an event in Media. The hitch has been taking single horses out to Anheuser-Busch distributors as well.

The Budweiser Clydesdales have a storied history. Anheuser-Busch first acquired a hitch of Clydesdales when August Busch Jr. gave them to his father, August Sr., as a gift to celebrate the repeal of Prohibition. The Clydesdales went on a tour of the United States to thank those who had made the repeal possible, and they have been traveling across the nation ever since.

The Clydesdales are known as ‘gentle giants.’ On average, they each weigh 2,000 pounds and are 18 hands tall, which is approximately 6 feet. All of the Budweiser Clydesdales are similarly marked, with a bay coat, black mane, white blazes down the nose and white legs.

In just one day, the Clydesdales eat about 40 pounds of hay and drink between 25 and 30 gallons of water, which is in addition to a portion of grain each day. The hay and bedding for all of Budweiser’s 150 Clydesdales comes from one farm.