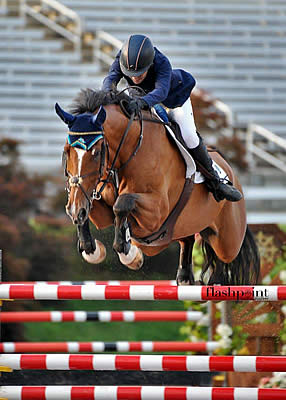 The Classic Company is pleased to announce that the Georgia International Horse Park, home of the 1996 Olympic Games, has resurfaced its arenas. “We are so pleased that the City of Conyers and the Georgia International Horse Park have committed to the installation of new footing in the arenas at this iconic facility,” commented Bob Bell, President of Classic Company. “It is fitting that in celebration of its 20th anniversary, new footing is installed which will undoubtedly contribute to the Horse Park continuing to be an international equestrian landmark,” he added.

Each year during its off season, the staff of the Georgia International Horse Park complete tasks in anticipation of preparing the facility for the upcoming season of horse shows and other events that take place at the facility built for the 1996 Olympic Games. The major challenge for the 2014-2015 off season was upgrading select arenas at the park, many of which had top-grade, original footing that was designed for use at the 1996 Olympic Games in which the Georgia International Horse Park made its world debut.

Since facility maintenance staff began improvements in late November, many arenas at the Georgia International Horse Park have seen substantial, major repairs. The equine industry is the Horse Park’s largest revenue generator and it was time to rebuild the base material, upgrade the footing and improve drainage conditions in several arenas, most notably the Grand Prix Stadium, Charles Walker Covered Arena, the warm-up arena, and Arenas 4-7, 14 and 16. The footing boards and fences in all arenas, longing rings and warm-up areas also underwent minor repairs.

Lonnie Abercrombie, Facility Manager at the Georgia International Horse Park, said, “The natural material placed in each arena will be ideal for multiple equine disciplines, accommodating the Horse Park’s varied scheduled throughout the year.”

The Georgia International Horse Park is also in the process of making technology advancements in regards to Wi-Fi access. The bandwidth was increased to allow more users to enjoy the Wi-Fi service while visiting the Horse Park. Work is currently underway to install conduit carrying fiber optics to provide more improvements for Wi-Fi access and the possibility of live streaming for future events.

“We have received so many emails and phone calls from riders excited about the new footing at the Georgia International Horse Park,” said Bell. “I am confident that riders and their horses will be very happy with the improvements,” he added.

Conyers, GA — June 26, 2011 — The Atlanta Summer Classics wrapped up competition at the Georgia International Horse Park, awarding nearly $300,000 in prize money and raising thousands for local charities over the two week run. “We’ve had some of the best riders in our sport joining us; it’s been a remarkable series and I couldn’t be happier,” Bob Bell, President of Classic Company, said.

Starting off the finale week was a couple of highly anticipated clinics on Tuesday, beginning with a member of the $1 million dollar club, famed Grand Prix pro Wilhelm Genn, sharing his secrets of mastering water jumps. Sponsored by the United States Hunter Jumper Association, Genn used the covered arena to set a mini course of six jumps, two with water hazards and utilized approximately ten horses to demonstrate proper and improper approaches. Speaking over a wireless microphone to riders and trainers for nearly two hours, Genn answered questions and provided helpful tips to “boost a horse’s confidence” when confronting water obstacles. Following was a very informative Pony Model Clinic with one of the foremost experts in this area, Bibby Farmer from Ocala, FL. She carefully explained to the young exhibitors not only what judges look for, but how to get the best from their ponies. Covering all the essentials from the pony’s stance to where the exhibitors’ attentions need to be when a judge is walking about them. On Thursday evening it was the judges who found themselves in the proverbial hot seats for an open forum called Just Ask the Judges, sponsored by Practical Horseman magazine. Three of the most respected names in judging, Betty Oare, Scott Fitton, and Barry Lobel, fielded questions from exhibitors and provided insight on scoring in the Hunter/Jumper disciplines. The panel also shared several of what they referred to as Judges’ Pet Peeves, which included overly short releases, especially in the Equitation divisions. All the experts agreed a restrictive release interferes with the horse’s jumping style, but pointed out that that doesn’t imply they want to see the opposite extreme with the infamous overdone throwing of the arms release.  Another peeve they described was the exaggerated tour taken upon entering the ring, stating that if a rider needs to show their mount the ring and/or the fences then the rider appears unprepared. Questions were asked on a wide range of subjects and guests left the forum armed with a lot of valuable information. “The clinics were a giant success and we [Classic Company] will be introducing more of these throughout out show schedule,” Bell commented.

END_OF_DOCUMENT_TOKEN_TO_BE_REPLACED

May 16th, 2011 – It was a busy weekend for the 2011 Atlanta Spring Premiere Horse Show.  The first show of a two week series wrapped up yesterday at the Georgia International Horse Park in Conyers, Georgia.  “We had a great horse show and unbelievable weather,” said show manager J. P. Godard of Equus Events.  Indeed, the week started off quite warm and sunny, but the weekend led way to lovely cooler temperatures and with the rain holding off it made for an absolutely wonderful finale to the week’s events.

The featured class of the weekend was the $25,000 Atlanta Spring Premiere Grand Prix which was held Saturday evening under beautiful skies in the International Arena.  An exhibitor and sponsor reception sponsored by Equus Events and the show’s “hospitality” sponsors was also held in conjunction with the class featuring southern delights such as barbeque pulled pork, baked beans, coleslaw, and an assortment of desserts.  It was an exciting night as some of the best horses and riders in the southeast contended against a challenging course designed by Pierre Jolicoeur.  After the first round, just 6 competitors moved on to the jump off including Daniel Geitner aboard Mr. and Mrs. Charles Bostwick’s Sympa, Jordan Coyne and her Lazaro, Kristin Vanderveen aboard her Bull Run’s La Bamba, Chase Boggio and Aslan 193, and Taylor Land with two mounts Merlin and Nepal.  With a fast time of 36.369 and no jumping faults it was all about Lazaro and owner rider Jordan Coyne!  They took home the blue ribbon and a custom cooler donated by Integrity Fine Equestrian Linens just edging out professional rider Daniel Geitner and Sympa finishing second with a time of 37.023.  St. Charles, Illinois resident Kristen Vanderveen and her Bull Run’s La Bamba took home the third place ribbon with a time of 37.135.  Complete Results are as followed:

END_OF_DOCUMENT_TOKEN_TO_BE_REPLACED

The professional hunter divisions took center stage in the hunter rings on Wednesday and Thursday while the jumpers tried their hand in the International Arena at courses designed by international jumper course designer Pierre Jolicoeur.  Hunt Tosh of Milton, GA had a stellar start to the week coming away with three tricolors on three Mr. and Mrs. Douglas Wheeler owned entries.  Tosh took home the First Year Green Hunter Championship aboard Triton Z, the Second Year Green Hunter Championship on Good Humor, and the Conformation Hunter Championship aboard Cloud Harbor.  Tosh is no stranger to the winners circle as he capped off an incredible 2010 season with a win in the coveted $100,000 USHJA International Hunter Derby finals in Lexington, KY on Lonestar as well as a Grand Hunter Championship and Leading Hunter Rider award at the Pennsylvania National Horse Show, just to name a few.  He was also the recipient of the United Equestrian Federation’s Emerson Burr Trophy in 2010.

END_OF_DOCUMENT_TOKEN_TO_BE_REPLACED

Conyers, GA — October 27, 2010 — Excitement is building as once again the Atlanta Fall Classics will play host to both the USHJA Zone 4 Finals and the National Hunter Jumper League Finals at the Georgia International Horse Park November 10th through 21st.

“These two big events are always a great way to end our show season, but there are so many other special classes occurring during our year end finale, such as the $25,000 Barry Lane Memorial, the Silver Cup Equitation Championship, and new classes too!” Classic Company Bob Bell shared.

Week one, November 10-14, will see some heated competition for the Zone 4 Champion titles in both the Hunter and Jumper divisions. Riders residing in Georgia, South Carolina, Florida, Alabama, Mississippi, or Tennessee will compete in a total of three classes, for the hunters two will be over fences and one under saddle with judges issuing a numeric score for not only the division, but with bonus points going to the Zone Finals total. For the jumpers all three classes will be over fences in their respective divisions. The following will offer Zone 4 Finals: