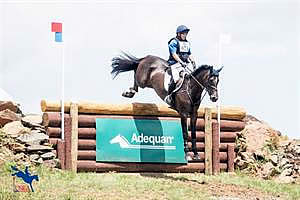 Leesburg, Va. – The United States Eventing Association (USEA) and the United States Equestrian Federation (USEF), with input from the Professional Riders’ Organization (PRO), have joined forces to launch the Adequan Gold Cup Signature Series (GCSS). The GCSS will include many elite CIC3* events in the U.S. that will each offer at least $25,000 in prize money, culminating with a GCSS final with an unprecedented total purse. Competitors will accrue points at each leg of the series, with a leaderboard tracking rankings throughout the year. Leaderboard rankings will then secure riders a spot in the Final, which will held in conjunction with the American Eventing Championships.

Designed to showcase the best eventing athletes in the U.S., build awareness of the sport, and create an unmatched competition experience, the GCSS will work to ensure the long-term growth and sustainability of eventing. In addition, the USEA and USEF are jointly developing key corporate relationship strategies for acquiring and retaining GCSS sponsorship.

“I am very excited about the launch of the Adequan Gold Cup Signature Series. As we look to be successful on the world stage as a nation, it is vital that we elevate the profile of the sport at home,” said 2016 Olympic Individual Bronze medalist and GCSS Steering Committee member, Phillip Dutton. “The GCSS will give horses and riders a great opportunity to test themselves at elite competitions, as well as build an even stronger support and fan base.”

The inaugural GCSS will likely feature six to 10 premier CIC3* competitions beginning in September 2017 and will culminate at the Final slated for the fall of 2018.

The GCSS Steering Committee will select participating events through a bidding process that will begin on October 6, 2016. Participating venues will be announced at the USEA Annual Meeting in December 2016 after a final proposal is submitted to the FEI for approval.

Competitions interested in becoming a fixture of this series or those with general media inquiries are encouraged to contact Kate Lokey at KLokey@Useventing.com.

From the USEF and USEA