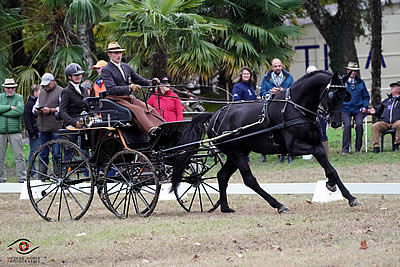 At the end of the first day of dressage in the CCI 5* – H1 competition in Pau, Luxemburg carriage driver Franz Schiltz is has taken the lead in the provisional ranking. The 2015 world champion is one step ahead of Saskia Siebers, the current star in the discipline, world champion titleholder in team driving and vice world champion in individual driving. Third place goes to Spanish driver Ana Muñoz Fernandez.

In the provisional ranking, the best French carriage driver, Tony Ecalle, is currently in fifth place. French driver Magalie Aillaud will kick off the events in the second half of the dressage tests of the CAIO 4*-H1 competition in the Pau 5* horse trials. Eyes will be riveted on defending champion Marion Vignaud, currently ranked third in the world in this discipline, scheduled to perform her test at 11:10 AM.

You will find all the results HERE.