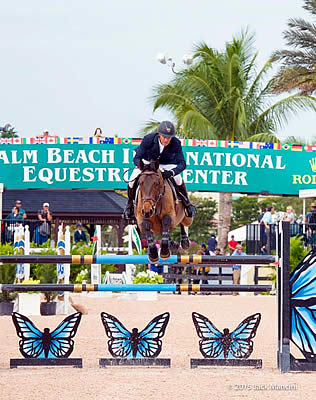 Wellington, FL – January 5, 2015 – Filip de Wandel of Mechanicsburg, PA and his own Gentley earned their first win of 2016, topping a competitive class in the $30,000 Nutrena Grand Prix at Palm Beach International Equestrian Center (PBIEC) on Sunday, January 3. De Wandel and Gentley impressed in the first grand prix competition of the New Year at PBIEC, crossing through the jump-off timers in 42.866 seconds to take top honors. Emanuel Andrade of Wellington, FL showcased immense talent around the jump-off track, finishing in second and third place aboard ZZ-Top VH Schaarbroek Z and Boy IV, respectively. Competition at PBIEC continues tomorrow, Wednesday, January 6, with the ESP Holiday Finale, which will highlight the final grand prix of the 2015 ESP Holiday Series, the $50,000 UHealth Ear Institute Grand Prix on Sunday, January 10, and will begin at 12:00pm.

Gentley, a 2006 Belgian Warmblood gelding (Bentley x Ulatrice), was bred by de Wandel’s father, Antoine de Wandel, in Belgium, and began his career with Filip de Wandel at the young age of three. The seasoned duo mastered the track, completing a solid first round before dominating the jump-off. The pair also rode to a top three finish in the $10,000 UHealth Ear Institute Open Stake on Thursday, December 31, taking second place honors.

“When I walked the course I thought it was big enough for a pre-circuit grand prix and was set at a very good height. I was doing this class with him as a warm-up class for the WEF circuit and it worked out really well for us,” explained de Wandel. “He jumped well on Thursday and I felt very confident coming into this class today that we would do the same. You can always have one down or something, but he felt careful today.”

Andrade made a valiant effort to catch de Wandel’s time, finishing in 43.318 seconds aboard ZZ-Top VH Schaarbroek and 45.616 seconds on Boy IV, but settled with a second and third place in the class of 32 entries. De Wandel explained that Gentley has a strong talent for maintaining speed in jump-off rounds, especially when there are significant galloping stretches throughout the course. He stated, “His strengths are in the jump-off rounds. This jump-off suited him very well because there were a lot of places where you could gallop. On him, you can just continue to gallop and he will keep jumping well. It’s really nice because I know that I can focus on being quick and he will stay careful.”

The partnership formed between the pair in their seven-year tenure together has been proven with several successful results this season at the grand prix level. Earning their first ever career grand prix win together at PBIEC, de Wandel was elated with Gentley’s performance on Sunday afternoon.

“He’s ten now and I’ve had him since he was just three years old. It’s been a very special partnership for us. He’s been doing the grand prix classes very well this year. He placed at the Hampton Classic over the summer and he’s brought home a lot of ribbons, but we never were able to get a win. It feels great to start this circuit off with a win under our belts,” he noted.

With their first win in hand, de Wandel plans to use Gentley throughout the 2016 Winter Equestrian Festival (WEF) circuit and is hopeful the pair will be able to contest some of the larger classes offered throughout the season. De Wandel explained, “I think I will try to start this circuit off doing the CSI 2* and 3* classes and see how he handles them before we decide if he’s ready for something bigger. If he does well, we will try to go as far as we can with him because he is very talented.

“He’s my only grand prix horse so I always need to be aware of what we’re doing with him. Our plan has been to only do five or six weeks throughout circuit. He’s started so well this year though that I think we’re in a place where we can hold off on the first week of WEF and do a CSI 2*. We’ll see how he does and go from there,” he continued.

Melissandre Lincourt of Montreal, QC and Just Stella L stole the show in the $10,000 UHealth Ear Institute Open Stake on Thursday, December 31, at PBIEC. Lincourt and her own 2006 Oldenburg Springpferd mare (Singulord Joter x For Joy) Just Stella L dashed to the finish in 35.503 seconds.

The duo narrowly edged Filip de Wandel and Gentley, who collected second place with a time of 35.56 seconds. Andrew Kocher of St. Louis, MO guided Ciana, owned by Eagle Valley Partners, LLC, to third place, crossing the timers in 36.414 seconds. The class of 32 entries saw six double clear rounds and fourteen combinations move forward to the jump off round.

Havens Schatt of Georgetown, KY rode Game Day, a 2007 Dutch Warmblood gelding (Cristo x Ohio I) owned by Kelley Corrigan of Lexington, KY, to victory in the $5,000 USHJA National Hunter Derby on Friday, January 1, earning a first round score of 83.5 and a handy round score of 92, to receive an overall 175.5 from the judging panel.

Schatt continued her success earning a second place aboard Breeze owned by John Yozell of Dedham, MA. The duo picked up a score of 86 in the first round and 87 in the handy round for an overall total of 173. Hannah Isop of Pawling, NY and Jackson, owned by Christine Watkins of Rowaton, CT, finished in third place with scores of 82 and 88 for a total score of 170.

Competition at PBIEC will begin tomorrow, Wednesday, January 6, and continue through Sunday, January 10. The $50,000 UHealth Ear Institute Grand Prix will highlight the week as the last grand prix of the ESP Holiday Series before the commencement of the 12-week Winter Equestrian Festival circuit on Wednesday, January 13. For more information on PBIEC and to view a full weekly schedule, please visit www.pbiec.com.