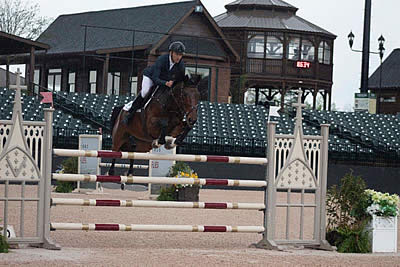 With 12 pairs and only six in the jump-off, Cardenas Jr. remained ahead in the course set by Gerry Briggs (Smyrna, TN). On the course, Cardenas Jr., who is also a full-time veterinarian, remarked, “It was a very nice course. It was a long course, and I thought the time allowed was going to be very lenient, but in reality, it was just right. We had to shave our corners and keep cantering,” he stated.

On his first-place mount, Quincy Too, Cardenas said, “We need to work on getting him a little bit more fit. I’d like for him to go to the Pan American Games in August, so our goal is to only show at Tryon, and get ready at the FEI events for that competition.” 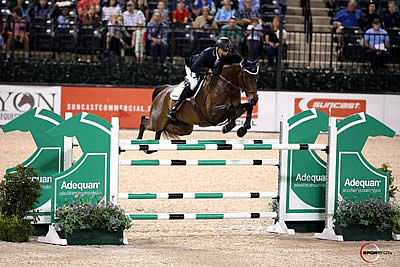 Mill Spring, NC – May 15, 2017 – The Tryon May Series ushered in the second week of competition to Tryon International Equestrian Center (TIEC), featuring hunter, jumper, and equitation competition beginning on Wednesday, May 10, and continuing through Sunday, May 14. The Tryon May Series will continue through Sunday, May 28, before the start of the highly anticipated Tryon Summer Series.

Fernando Cardenas Jr. of Raleigh, NC piloted Valentine Car to victory in the $25,000 Marshall & Sterling Grand Prix, finishing nearly three seconds faster than second place finishers Harold Chopping of Southern Pines, NC and Basje. Cardenas, Jr. and Valentine Car made easy work of the short course, stopping the timers in 41.53 seconds, while Chopping and Basje cleared the track in 44.351 seconds. Jorge Andres Barrera, who competes for the nation of Colombia, piloted Cartouche to third place with a time of 45.119 seconds after dropping a rail for four faults in the jump-off.

Cardenas Jr. and his own Valentine Car excelled around the difficult track set by Manuel Esparza (MEX), which saw rails drop throughout the course from numerous trying combinations. In only Valentine Car’s second grand prix event, Cardenas Jr. was ecstatic with the performance of the 2009 Warmblood gelding, who was bred by Cardenas Jr.’s father. The duo also finished second in the $5,000 Suncast Commercial® Welcome Stake earlier in the week.

“All of the lines we’re really long tonight and I was a little bit concerned about Valentine at the beginning. My first horse in the class struggled a bit in two of the lines and I thought that there may be a problem, but he was outstanding,” said Cardenas Jr. “He was just incredible today. It’s a great win for us both.”

The duo sped through the jump-off, tackling the technical turns with ease and giving the crowd an enthusiastic lap around the George H. Morris Arena after crossing through the timers to secure the win.

“I’ve always looked up to Harold and think that he’s a class rider. I thought he was pretty fast and wasn’t sure if I could catch him, but my dad always says that this horse is very fast and he is,” he explained. “He’s quick across the ground and where I took a gamble was to the Ariat jump. It was somewhat of a blind turn the way that I came into it and he jumped it easily.”

“He’s a very clean horse. It’s his number one quality. He has the will to not touch the rails,” he added.

Valentine Car is one of the younger horses in Cardenas, Jr.’s string and he has high hopes for the gelding as he hopes the pair will be considered as a potential combination for the 2018 FEI World Equestrian Games, which will be hosted at Tryon International Equestrian Center in September of next year.

“He’s a smart and quirky horse. He has an incredible class to him. He’s related to my stallion Quincy Car and I’m hopeful that he will follow in his shoes. We’re only planning on showing here in Tryon this season. This is home for us. Even though we’re in Raleigh, this feels like it’s in our backyard and we love it here,” he elaborated. “We want to set lofty goals with him and we would love to represent Colombia here at the FEI World Equestrian Games next year.”

Trapp O’Neal of Magnolia, TX and Capitano, owned by TKO Partnership, rode to victory in the $5,000 Suncast® Commercial Welcome Stake at TIEC on Thursday, May 11, after finishing the jump-off in 34.926 seconds. Fernando Cardenas Jr. of Raleigh, NC and his own Valentine Car captured second place with a jump-off time of 35.623 seconds, ahead of his second mount Quincy Too, who rounded out the top three with a time of 36.17 seconds.

The class saw 25 entries contest the track, while ten combinations advanced the jump-off round and five pairs earned a double clear effort. Jorge Ludwig of Newbury Park, CA and Lamarique stopped the jump-off timers in 33.842 seconds to collect the fastest time of the day, but dropped a rail during their round to keep them out of the top placing.

Beth Von Brecht of Dallas, TX and her own Melody took top honors in the $5,000 Ariat Medium Junior/Amateur Owner Classic after dashing through the jump-off timers in 38.861 seconds. Fernando Cardenas Jr. of Raleigh, NC and A Calvados Car finished in second place with a time of 40.113 seconds ahead of Judy Sutton of Waynesville, NC and her own Win A Date, who collected four faults on the jump-off track and stopped the timers in 37.118 seconds for third place.

The $3,000 Low Junior/Amateur Owner Classic saw Brandon Howard of Flower Mound, TX and HF Cerano, owned by Homeward Farms, take top honors in the class after completing the jump-off in 37.671 seconds. Paige Bellissimo of Wellington, FL piloted Zindora van de Kapel, owned by Bellissimo LLC, to second place with a time of 40.431 seconds ahead of her second mount, De Beers, also owned by Bellissimo LLC, who earned third place with a competitive time of 41.835 seconds.

Tracey Gorin-Byrne of Wellington, FL and Daphnie, owned by Fiach Byrne Inc., topped the $2,000 NAL/WIHS High Adult Amateur Classic, as the pair finished the day as the only pair to go clear in both the first round and in the jump-off. Suzanne Suttles of Flower Mound, TX and Galmiro vh Schaarbroek, owned by DGS Farms LLC, were presented with second place after finishing the jump-off in 46.963 seconds and adding four faults to their score. April Derienzis of Gramik Falls, NC guided her own Bella de la Rose to third place, completing the course in 44.587 seconds with twelve faults.

The $2,000 NAL/WIHS High Children’s Classic saw Jaclyn McGhee of Chapel Hill, NC and her own High Hickstead take first place as the fastest four fault round in the jump-off. C. Blair Spencer of Pinehurst, NC and Argentum finished in second place with a time of 57.726 seconds, while Rose Dillon of Milton, GA and her own Baba Booey WB took third place with a first round time of 72.514 seconds.

Roger Smith of Wellington, FL and his own Darco Two rode to victory in the $300 CWD Child/Adult Jumper Stake after finishing their jump-off round in 38.017 seconds ahead of Amy Hebert of Aiken, SC and her own Major Dee, who completed the track in 38.207 seconds. Allison Scott of Wellington, FL and Dahlia finished in third place with a time of 42.451 seconds.

Lindsay Maxwell of Beverly Hills, CA and her own Catalyst took first place in the $2,500 USHJA National Hunter Derby after amassing an impressive two round score of 188. Heather Steinman of Canton, GA and Hannahlea, owned by Kelly Sims, secured second place after receiving a score of 186. Courtney Boyd of Wellington, FL and Castino 6, owned by Allison Scott, finished in third place with a final score of 179.

Maxwell and Catalyst earned a score of 93 in the first round before returning for the handy to earn a 95 from the panel. The duo’s performance in both rounds earned them the highest scores of the class. The derby saw fourteen entries, while four combinations scored above a 177, making for a competitive showing.

The Adult Amateur Hunter 36 & Over saw Jennifer Smith of Wellington, FL and her own Ocean Mist earn the divisional championship for their performances throughout the week. Karen Bruce of Lewisville, NC and her own Out of Vogue took the division’s reserve champion honors.

The Amateur Owner Hunter 3’3″ 18-25 saw Lindsay Maxwell of Beverly Hills, CA and her own Kingston ride to the top of the division ahead of Tess Fortune of Greendale, WI and her own MVP who finished with reserve champion accolades.

Jennifer Hannan of Wakefield, RI and Stoli, owned by Jane Olson Fisher, rode to victory in the USHJA Hunter 2’6″/2’9″ Division ahead of Sara Taylor of Sherborn, MA and Enqirue, owned by Craig Phillips, who finished the week as the division’s reserve champion.

To learn more about Tryon International Equestrian Center and to view a full list of weekly results, please visit www.tryon.com.