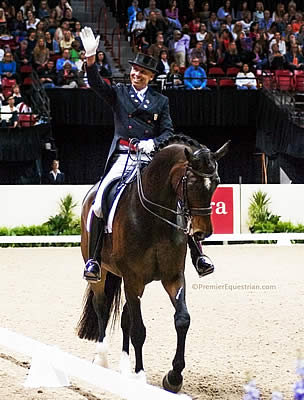 Sandy, Utah (June 9, 2015) – Truly successful equestrians settle for nothing less than the best for themselves and their horses. So it’s no surprise that out of all the dressage riders in the United States, the two who rank highest in the FEI World Individual Dressage Rankings love Premier Equestrian. Steffen Peters and Laura Graves, known as “Premier Equestrians” by this leading arena, footing, and jump manufacturer, are now ranked nine and ten, respectively, in the world. It is believed to have been at least six years since American riders have achieved two of the top ten rankings in the world at once – since July, 2009, in fact, when Peters was also one of the two top-ranked U.S. riders.

In the FEI World Individual Dressage Rankings released on May 31, 2015, Peters and Legolas 92, a thirteen-year-old Westfalen gelding owned by Four Winds Farm LLC, moved from the eleventh slot to the ninth. The pair’s most recent successes include placing third at the Reem Acra FEI World Cup™ Dressage Final I Grand Prix with a score of 76.843 percent. Show ring victories don’t stop there for Peters, of San Diego, California. In his final show of the 2015 Dressage Pan American Games European CDI Observation Event Squad – a CDI4* Grand Prix in Achleiten, Austria – Peters took first place on his newer mount, Rosamunde. Their winning score was 74.560, only four months after Rosamunde (an eight-year-old Rhinelander mare owned by Four Winds Farm) began showing in the Big Tour.

Laura Graves and her own thirteen-year-old KWPN gelding Verdades (Florett AS-Liwilarda, Goya) – who Graves got as a six-month old and has ridden to international success since – retained their tenth slot in the FEI World Individual Dressage Rankings since last month. Graves is currently focusing on training with Olympian Debbie McDonald, who is also a proud Premier Equestrian. Graves and Verdades, who Graves calls “Diddy”, achieved a fourth place and score of 79.125 percent in the Reem Acra FEI World Cup™ Grand Prix Freestyle, and have not competed since. With that competition and her time in Hailey, Idaho with McDonald under her belt, the Geneva, Florida based Graves will be a formidable competitor in the 2015 Pan American Games in July.

Premier Equestrian, based in Sandy, Utah, congratulates Peters and Graves on putting double United States dressage talent in the FEI World Individual Dressage Rankings top ten. “A ‘Premier Equestrian’ is an equestrian who has been outstanding in his or her contribution to horses, riding, and equestrian culture; and who has achieved a high level of competition, generated awareness of the sport, and shared knowledge,” explains Premier Equestrian’s president Heidi Zorn. “Steffen and Laura do this so well, and we are proud to work with them.”

The company is globally recognized for its expert arena footing, premier dressage arenas, and revolutionizing horse jumps. The research behind Premier’s effective products, the materials they are created from, and the living testimonials of horses and riders who use them – like Graves, Peters, and McDonald – explain why Premier Equestrian is a leader in its market. Learn more about the company and its outstanding Premier Equestrians at www.PremierEquestrian.com.

Lausanne (SUI), 5 September 2012 – Great Britain’s Charlotte Dujardin and the 10-year-old Dutch warmblood gelding Valegro, double Olympic gold medallists at London 2012, have taken over as world number one in the FEI World Individual Dressage Rankings and are the first British combination ever to top the world rankings.

With 2,867 points, the combination have moved up from second place to claim the top spot, seven points clear of former world number one and London silver medallists Adelinde Cornelissen (NED) and Jerich Parzival, the Dutch pair that have led the rankings since July 2011.

The British combination moved up from fourth to second in the rankings list published just before the Olympic Dressage Grand Prix, the first team qualifier on 2 August, and it was their performances at the London Games that have boosted them to the top of the rankings.