The CFA reviews all aspects of an agency’s policies and procedures, management, operations and support systems to verify compliance with 276 recognized standards of excellence.  Accreditation by the CFA is voluntary but considered a significant accomplishment and this status is held in high esteem by the criminal justice community.

“This meticulous review of the facilities, personnel and programs within AgLaw measures our professionalism in a meaningful way, ensuring we meet the high standards dictated by law enforcement across the state and the nation,” Bronson said.  “The Office of Agricultural Law Enforcement has continued to expand its duties and responsibilities over the years in protecting our citizens and visitors and clearly our peers have determined we are meeting and exceeding expectations.”

END_OF_DOCUMENT_TOKEN_TO_BE_REPLACED

TALLAHASSEE — Florida Agriculture and Consumer Services Commissioner Charles H. Bronson is urging horse owners to get their animals vaccinated following an upsurge in the number of Eastern Equine Encephalitis cases.  Sentinel chickens that serve as an early warning of the existence of the disease are also being diagnosed with EEE in areas of the state that are not usually affected.

So far this year there have been 16 confirmed cases of EEE in horses.  While that is not an unusually high number, seven of the cases were reported on Wednesday, June 23, from counties scattered throughout the state.

“Most of the cases have been in the central and north central part of the state which is normal,” Bronson said.  “But we are also seeing increased EEE and West Nile Virus activity in sentinel chickens in the southern part of the state, including Martin County which has not had EEE detected in 30 years.  In addition, there has been a confirmed case of EEE in a horse in both Collier and Okeechobee counties.  So I want to remind horse owners of the importance of getting their animals vaccinated.”

EEE is a viral disease that affects the central nervous system and is transmitted to horses by infected mosquitoes.  Signs of the virus include fever, listlessness, stumbling, circling, coma and usually death.  The disease is fatal in horses in 90 percent of the cases.

Bronson says the majority of cases of EEE and other mosquito-borne diseases can be prevented through proper vaccinations.  Horse owners are urged to check with their veterinarian to make sure their animals have received current vaccinations and booster shots against EEE and West Nile Virus, and that these shots are kept up to date.

The two principal equine diseases associated with mosquitoes are Eastern Equine Encephalitis (EEE) and West Nile Virus (WNV), and the majority of cases of each can be prevented with proper vaccinations, according to animal health officials.

“The key is to make sure that a horse has been vaccinated against these mosquito-borne diseases and to check with your veterinarian to determine whether an animal’s booster shots are up to date,” Bronson said.

END_OF_DOCUMENT_TOKEN_TO_BE_REPLACED 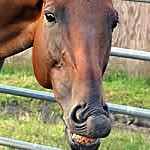