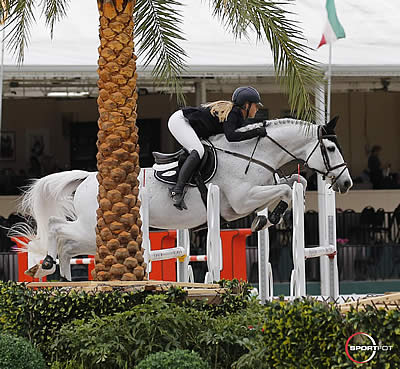 VanderVeen and her veteran campaigner were the fastest of 18 clear rounds out of 43 entries in the 1.45m over a course set by Alan Wade of Ireland. They took over the lead from Lucas Porter (USA) and Hope Street, who had set the time to beat at 59.66 seconds. They would finish in third place. Riding out of the 24th spot in the order, VanderVeen and “Frosty” brought the winning time down to 56.54 seconds.

“I didn’t see anybody go before me that was really trying to win the class,” said VanderVeen. “There were some more careful components, so I was actually a little more conservative than I planned on being! Thankfully it still worked out. He just covers the ground so well and is still quick in the air.”

Following the morning’s five-star Bainbridge 1.45m competition, the second victory of the day in the International Arena went to Brazil’s Fabio Leivas da Costa in the $37,000 Griffis Residential 1.45m CSI2* class. Da Costa was part of a starting line-up of 73 horse-and-rider combinations set to contest Alan Wade’s next course.

Seven combinations were kept from the jump-off with a single time fault while another 16 suffered the fault of a single rail. Out of the field, only 13 pairs managed to clear the timers fault-free to return for the second phase; that number became 12 when Eugenio Garza Perez (MEX) withdrew from the jump-off field. Athletes from both Ireland and Venezuela were at the top of the leaderboard, but it was da Costa and Bonne Chance Farm’s 15-year-old Selle Francais mare Randon Pleasure (For Pleasure x Quidam de Revel) that raced through the timers in unbeatable speed.

Friday morning began with pony riders taking on the Derby Field at the Equestrian Village. It was Clara Propp and News Day who took top honors in the competitive $5,000 USHJA Pony Hunter Derby. After receiving a high score of 86 in the first round, the pair maintained their lead with a score of 80 in the handy round for a total score of 166.

Propp, of New York, NY, and News Day, owned by Aquitaine Equine, were the last to return for the handy round after they earned the highest score in the classic round. The 12-year-old gelding by Clovercroft’s Abba Adonai has been in the Propp family for several years and originally showed in the Large Green Pony Hunters with Propp’s older sister, Stella. Once Stella outgrew ponies, Clara took over the reins and continued News Day’s successful show career. 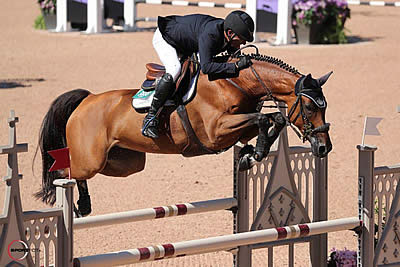 A field of 43 horse-and-rider pairs toured the first-round course with 19 entries returning to test their luck on the jump-off track set by Peter Grant (CAN). Before riding the jump-off, Leivas Da Costa and his team observed previous competitors and set goals. “We talked before the class and set a time goal of 37 seconds. We actually earned 38 seconds, but still earned first,” Leivas Da Costa explained.

Leivas Da Costa, concerning his mount, stated, “Tosca De L’Esques has a big heart. She is willing, and tries as hard as she can. She never says, ‘no,’ she just says, ‘where do I go next?'” He continued, “She has a really huge stride and is a fast, forward horse. She really fights for us.”