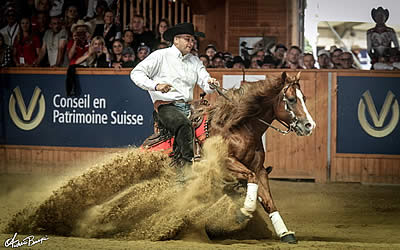 Team Belgium is no stranger to the highest step of the podium in FEI competition, yet a Belgian rider had never clinched the coveted individual gold medal until Bernard Fonck (BEL) dominated the competition in Givrins, Switzerland. Riding the athletic American Quarter Horse stallion Smart N Sparkin, owned by Golden Paint Ranch, Fonck performed an outstanding pattern which led to a 225 score.

“I’ve had this horse ever since he was a two-year-old and have won quite a few major titles in the reining circuit with him. Since I knew that the competition here was tough and the level high, I was aiming for the podium but was not sure if we would be able to claim the gold. After the first part of the pattern, I felt that we could actually make it. I asked and he delivered and am thrilled for this very first individual gold medal for Belgium.” — Team and Individual gold medallist Bernard Fonck (BEL)

Germany claimed both the silver and bronze medals thanks to the 222 posted by Dominik Reminder (GER) and Dun It with a Splash, owned by Manuela Moser, and to the 221 scored by Julia Schumacher (GER) riding Coeurs Little Tyke for owner Georg Holzwarth.  Both riders were part of the German team, silver medalist in the team competition, with team bronze going to the previous title holders Italy.

Once again the ‘dream team’ made up of Gina Schumacher (GER) and her Gotta Nifty Gun scored a winning run in the Young Riders competition. The German athlete reined her blue-eyed companion to an amazing 224.5 to take the individual gold medal. The duo had also secured the gold for Germany in the team competition and once again lit up the public stands by performing a superb demonstration of reining at its very best.

“I love my horse. We understand and take care of each other every single time we compete and he always gives me all he has. Whenever I’m nervous, he calms me down and vice versa!” — Germany’s double gold medallist, Gina Schumacher

It took a run-off to determine who would wear the silver and bronze medals. Nico Sicuro (ITA) riding Iam Sailors Brother and Dino Lulli (ITA) riding Sun Dreamin Star both posted a 219.5. The two fellow countrymen went back to the show arena and, once the last maneuver was performed, Sicuro and the 11-year-old stallion’s run was worth a 219. Lulli and his mount also gave all they had, but their final 217.5 score put them behind and they settled for the silver medal.

Last to go in the Junior individual competition, Axel Pesek (FRA) and Uncle Sparky performed an incredible pattern #9. They lit up the arena, had the crowd cheering, and rode to the gold medal thanks to their high score of 221.5. In the Junior team competition, the 16-year-old French rider’s performance had secured the bronze medal for Team France.  Taking the silver medal with a 218.5 score was Matteo Bonzano (ITA) riding his High Point Reiner. The bronze also went back to Italy thanks to Gabriele Landi’s performance aboard Spirit Spanish. The duo closed with a 217.5 score. Once the curtain fell on the stage of the inaugural FEI World Reining Championship for Juniors and Young Riders, seven medals were conquered by Italy.