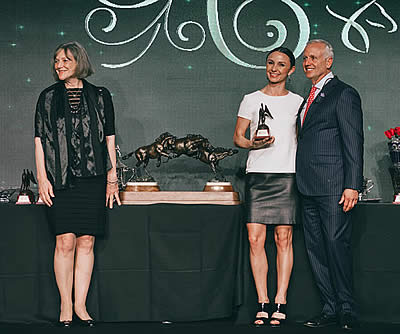 Georgina Bloomberg received the EQUUS Foundation Humanitarian Award at the Pegasus Awards Dinner on January 10, 2020 during the US Equestrian Annual Meeting in West Palm Beach, Florida. The EQUUS Foundation and the United States Equestrian Federation established the Humanitarian Award in 2009 to honor a member of the equestrian world who has devoted considerable personal time to making the quality of life of our equine partners paramount.

Bloomberg is not only an accomplished, world class equestrian, she is also a renowned, committed, and highly influential animal welfare advocate who is an inspiration and role model to her many thousands of friends, followers and fans who follow her lead in helping all animals.

In 2006, at the age of 23, in the midst of a budding career in equestrian sport, Bloomberg established The Rider’s Closet to provide equestrian clothing to individuals in need, as she wanted to give back to the sport that had given her so much. In 2019, the Rider’s Closet became an EQUUS Foundation program.

“We learned firsthand that tens of thousands of people of all ages all across the country have been able to pursue their horsemanship dreams thanks to Georgina’s efforts,” said Lynn Coakley, EQUUS Foundation President. “Equally fortunate are all of the horses whose futures might have been dramatically different without opportunities for them to partner with these tens of thousands of people who benefitted from The Rider’s Closet clothing.”

In accepting the award, Bloomberg said, “I have to say that of any award or prize that I have been lucky enough to receive while representing the USA, this has to be top of the list and most meaningful. It’s an amazing honor to have my name on this award, but this award is not a recognition of my work — my good intentions, yes — but much more than that — it is a recognition of how when people come together and work together as a team, what you can accomplish is limitless. I am incredibly lucky to have great people who have helped and continue to help make my dreams of accomplishments in the saddle and out become a reality.”

While Bloomberg’s crew of rescued pets includes a pig, a goat, numerous adopted and foster dogs, a cow and her calf, a rooster, and even a savvy pigeon named Steve, horses are Bloomberg’s first love, and they are at the center of her extensive and impactful animal protection efforts. Her rescued mother and son mini horses, Lola and Harley, Abe, the mule rescued from slaughter, a retired carriage horse named Sultan whom she adopted, and all the show horses she has retired at her farm that get to live out their days with loving care, all agree.

As an EQUUStar, Bloomberg passionately advocates for horses at risk for abuse, neglect, and slaughter in both her words and actions, rallies other equestrians on behalf of horse welfare, and leverages her high-profile status, partnerships, and connections to drive home the message that all horses deserve happy lives and happy endings.

When Bloomberg wanted to pique her five-year-old son’s interest in learning to ride, it was no surprise that she made the choice to also make a difference in the life of an at-risk horse. Bloomberg adopted Teddy – a miniature horse rescued by Omega Horse Rescue from a kill buyer’s facility. Teddy and Jasper became a social media sensation, encouraging others to rescue and adopt.

“It was a thrill and a privilege to honor a member of the EQUUS Foundation family. Georgina’s passionate work and actions on behalf of the welfare of horses is extraordinary, exemplary, and powerfully inspirational,” said Coakley.

Lexington, KY – Known as a visionary with an incredible passion for horses and learning, Molly Sweeney, of Hockley, TX, has been chosen as the 2011 recipient of The EQUUS Foundation Humanitarian Award for her local- and national-level volunteer work for over two decades in the equine assisted activities and therapies (EAA/T) field.

Sweeney recognized the importance of professional research to support the results from EAA/T. To that end, she gathered like-minded individuals with the intent to create a plan to promote research. It was under her leadership and dedication that the Horses and Humans Research Foundation (HHRF) was born. As a 501(c)3 non-profit, HHRF offers grants for scientific research on the therapeutic relationship between horses and humans.

“We are most pleased that Molly Sweeney has been selected to receive the Humanitarian Award for 2011 for her dedication and tireless work with equine assisted activities and therapies, and her leadership in establishing the Horses and Humans Research Foundation (HHRF),” said Jenny Belknap Kees, Chairman of the Board of The EQUUS Foundation. “HHRF’s work on validating the influence of horses on human health will transform the value and purpose of equines in our culture.”

END_OF_DOCUMENT_TOKEN_TO_BE_REPLACED

Lexington, KY – The United States Equestrian Federation (USEF) and The EQUUS Foundation will honor the hard work and dedication of equestrians with the presentation of the third annual EQUUS Foundation Humanitarian Award to be presented during the Pegasus Awards at the USEF Annual Meeting in January 2012.

In 2009, USEF and the EQUUS Foundation united to create the industry-wide award to celebrate the humanitarian achievements of a member of the equestrian world. Specifically, this humanitarian honor spotlights and exalts the selfless dedication of one individual or a group of individuals on a regional or national scale. From improving the health and welfare of the horse to promoting and expanding the general public’s appreciation and respect of the diverse role of horses – not just in equestrian sport but to the general public – the recipient will be someone who has devoted considerable personal time to making the lives and quality of life of our equine partners paramount.

The 2010 recipient, Bob Cacchione, Executive Director of the Intercollegiate Horse Show Association (IHSA), was selected from more than 20 nominees.  At the core of Cacchione’s own passion for riding and appreciation for the opportunities made available to him as a young horseman is his understanding of the horse’s role as a great equalizer. With the concept of a level playing field as his cornerstone, he rallied the support of like-minded individuals from educational institutions, first in his region, and ultimately, from throughout North America. Those efforts led to the formation of IHSA.

END_OF_DOCUMENT_TOKEN_TO_BE_REPLACED

WELLINGTON, FL – January 9, 2011 – Bob Cacchione, Executive Director of the Intercollegiate Horse Show Association (IHSA), will be honored as the recipient of The EQUUS Foundation Humanitarian Award presented by The United States Equestrian Federation (USEF). The presentation will take place on January 21, 2011, at the USEF Pegasus Awards Dinner during the Federation’s Annual Meeting in Lexington, KY.

The EQUUS Foundation Humanitarian Award is a celebration of the humanitarian achievements made by a member of the equestrian world.  Specifically, the goal of this humanitarian honor is to spotlight and exalt the selfless dedication one individual or a group of individuals has made, whether on a regional or national scale. From improving the health and welfare of the horse to promoting and expanding the general public’s appreciation and respect of the diverse roles of horses, the recipient of this award will be someone who has devoted considerable personal time to making the lives and quality of life of our equine partners paramount.

“I am totally overwhelmed with this honor; especially being recognized by my peers,” said Cacchione. “To be acknowledged for what I have tried to do for the youth of the equestrian world with the creation and development of the IHSA is just incredibly meaningful.”