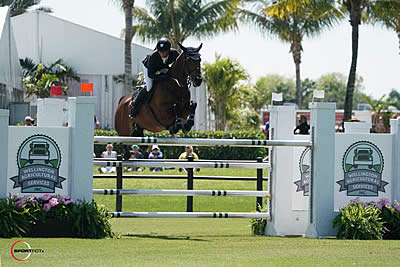 The main feature of the 2019 Winter Equestrian Festival (WEF) on Saturday, March 23, was the $209,000 Wellington Agricultural Services Grand Prix CSI 4*, held on the grass derby field at Equestrian Village at Palm Beach International Equestrian Center. Emil Hallundbaek (DEN) and Chalisco raced to victory in the field full of top competitors.

There were 45 entries that went to post in the $209,000 Wellington Agricultural Services Grand Prix CSI 4*, and five of those recorded a clear round and advanced to the jump-off.

First to return was Lorcan Gallagher (IRL) riding Dacantos Group’s Hunters Conlypso II. He and the 11-year-old Hanoverian gelding by Contendro I x Calypso II had a rail at the ‘a’ element of the “bogey” double combination for four faults in 45.35 seconds to finish in fifth place.

Hallundbaek and Chalisco were next in, and they galloped around the field and cleared every jump presented to them, crossing the timers clear in 42.37 seconds.

Spain’s Sergio Alvarez Moya scored a comeback victory in the $134,000 CaptiveOne Advisors 1.50m Jumper Series Final during “Saturday Night Lights,” after a six-month recovery from ACL knee surgery. Alvarez Moya bested a field of 60 entries over tracks designed by Steve Stephens and Nick Granat (USA) in the International Arena at WEF by posting one of only three double-clear performances riding his own MHS Attraction.

The top fifteen horse-and-rider combinations based on faults after the first round (25% of the original entries) of the CaptiveOne Advisors 1.50m Jumper Series Final advanced to a second phase to decide the ultimate winner, and faults were cumulative through the two rounds. Alvarez Moya crossed the final timers in 49.59 seconds for the win over Lorenzo de Luca (ITA) aboard Soory de l’Hallali.

Kicking off Saturday competition in the E. R. Mische Grand Hunter Field, Sophie Gochman and Garfield secured the champion title for the Week 11 Large Junior Hunter 3’6” 15 and Under division. After parting ways when Garfield was purchased by Bikoff Equestrian LLC, the pair reunited in the hunters this circuit and landed the championship after winning both of the day’s over fences classes.

Gochman owned the 16-year-old Holsteiner gelding (Coriano x Love Touch), whom she affectionately calls ‘Kitty’, for a period of time before he was sold a year and a half ago. With his current owner, Ella Bikoff, competing several other horses in the Junior Hunter 3’3” divisions, Gochman was given the opportunity to take the ride on Garfield again and the pair have picked up right where they left off.

Gochman and Garfield held the highest scores in three out of the four over fences classes with two rounds earning 87.00 points and a third earning 88.00 points.