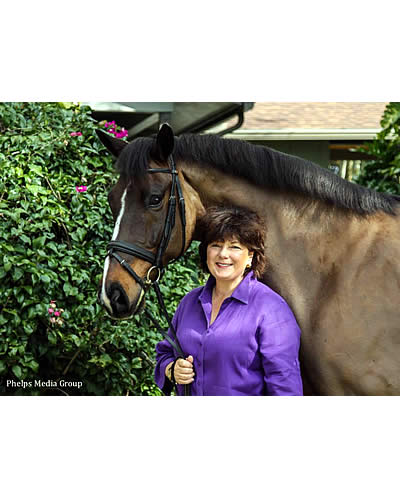 Elizabeth B. Juliano of Havensafe Farm.

Juliano is an accomplished dressage rider, high performance dressage horse owner, USET Foundation Trustee and Chair of the Development Committee, all of which reflect her leadership and extraordinary commitment to this country’s United States Equestrian Teams.

The money raised will support the United States Equestrian Federation’s pilot program for Human Sports Science and Medicine (HSSM), which is vitally important in preparing riders for the upcoming Olympic Games where every detail of the preparation will be critical to success. The Equine Sports Science Medicine (ESSM) and HSSM personnel will be working together in a conjoined approach which will allow riders to improve their preparation for and performance at Rio 2016 as well as other Championships by working on their imbalances and injury prevention. The program will interact with riders’ trainers and SSM personnel so all support provided is coordinated with a focus on performance. Further information on the Program will be released to athletes and other key stakeholders by the USEF once the final details are in place.

For more information on the USET Foundation and the Elizabeth Juliano and Havensafe Farm Human Sport Science and Medicine Challenge, contact Bonnie Jenkins, Executive Director, at (908) 234-1251.

Gladstone, NJ – February 6, 2012 – The United States Equestrian Team Foundation is pleased to announce the election of new Trustees Georgina Bloomberg, George Davis, Elizabeth Juliano, Murray Kessler, Lyle Lovett, Misdee Wrigley Miller, MK Pritzker and Philip Richter. The new Trustees were elected to the Board on January 28, 2012 during the USET Foundation’s Annual Meeting. They will aid and assist the USET Foundation in its mission to support the competition, training, coaching, travel and educational needs of America’s elite and developing international, high-performance horses and athletes in partnership with the United States Equestrian Federation.

Georgina Bloomberg of North Salem, NY and Wellington, FL has been competing in Show Jumping at the international level for many years. She has represented the United States at the World Cup Finals and also in Nations Cup competitions. Bloomberg won the Maxine Beard Award in 2004 and she also founded The Rider’s Closet to distribute used clothing and equipment to college equestrian teams and pony clubs.