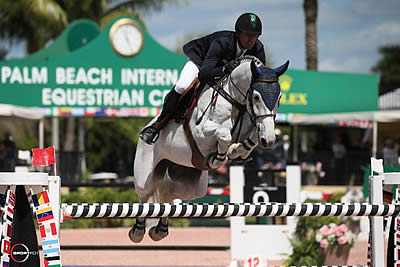 There were 52 entries in Thursday’s class, with seven going clear and advancing to the jump-off. First into the ring were Jessica Springsteen (USA) and Stone Hill Farm’s Fleur de l’Aube. They finished clear in 37.15 seconds for third place.

The time was lowered with the next rider in the ring, Kevin Babington (IRL), on Shorapur, owned by Shorapur LLC. They were just under Springsteen’s time in 37.10 seconds, which would hold up for second place.

Menezes and H5 Quintol were third into the jump-off and set the time to beat at 36.66 seconds, which would not be bested by the remaining four riders.

Athletes taking part in the Equitan Performance Hunter 3’6” division returned to the E. R. Mische Grand Hunter Field on Thursday, March 7, to determine the champion and reserve of Week 9. Jacob Pope of Columbia, MD bested a field of 28 horse-and-rider combinations to take the lead on Kathryn Brown’s Bourbon Street with a total of 28 points.

The two have been teammates for several years with trainer Heather Irvine who has had Bourbon Street under her tutelage since he was roughly five years old. While the nine-year-old Dutch Warmblood gelding was not Pope’s only ride in the division, he says he is by far one of his favorites. 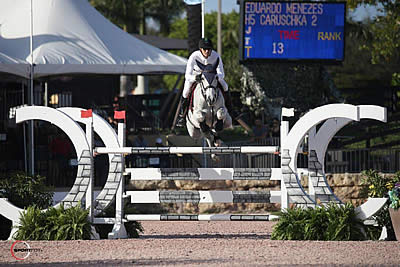 In Friday’s featured speed class, the early time to beat over the Anthony D’Ambrosio-designed course had been set at 64.00 seconds by Marilyn Little (USA) and Clearwater, but when Menezes and H5 Caruschka 2 entered the ring during the second half of the class, they made short work of the course, shaving more than two seconds off of Little’s time to take over the lead in 61.90 seconds. 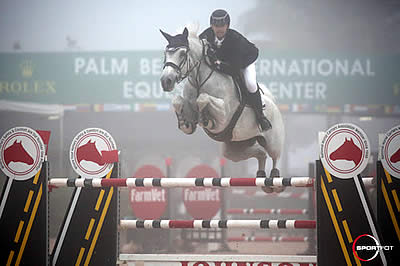 Michel Vaillancourt (USA) is the course designer in the International Ring for WEF 10. First thing Wednesday morning, Vaillancourt saw 63 entries with 17 clear rounds over his 1.45m speed track. Twelfth to go in the order, Menezes and Caruschka 2 raced through the early morning fog to clock the winning time of 59.44 seconds.

Menezes has owned Caruschka 2, a 12-year-old Oldenburg mare (Caspar x Continue), for five years and has a great partnership with the talented mare. She came from breeder Gestüt Lewitz, and Menezes purchased the mare as a seven-year-old after she went to the FEI World Breeding Jumping Championships for Young Horses in Lanaken, Belgium.

Speaking of his winning round with Caruschka on Wednesday, Menezes stated, “This mare is a very good speed horse. I think it was a very good course for her. She has a huge stride and you can take strides out here and there, and in the end it works great.”

“She is a very sweet horse. She has a lot of character,” Menezes detailed. “On a daily basis, she is a hot horse to ride, but she will never buck or spook. She is very easy to handle at home, but when she gets to the show she knows that she is here and then she gets her engine really going. Then I just have to hold the reins and let her go.”

Caruschka 2 and Menezes will compete next in Friday’s $35,000 Illustrated Properties 1.45m Classic and then compete in three classes during week 11.

In the spring, Menezes and his horses head to Europe. Menezes then has his sights set on the Olympic Games in Rio de Janeiro with his top horse, Quintol.

Also competing in the International Ring on Wednesday, the $6,000 1.40m speed, sponsored by Illustrated Properties, was held in a California split. Laura Chapot (USA) and Mary Chapot’s Shooting Star won Section A, and Clementine Goutal (USA) and Arao Enterprises’ Caballito topped Section B.

The tenth week of competition at the 2016 Winter Equestrian Festival continues on Thursday with the $35,000 Ruby et Violette WEF Challenge Cup Round 10 featured in the International Ring. The High Performance Working Hunters will award championship honors in the E. R. Mische Grand Hunter Ring. For more information and full results, please visit www.pbiec.com. 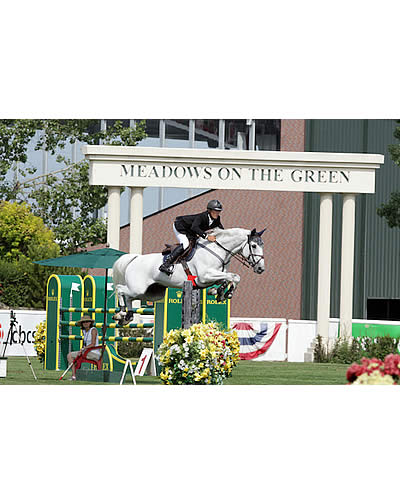 Calgary, AB, Canada – July 10, 2015 – USA’s Richard Spooner jumped to victory aboard his own Chivas Z in the $85,000 ASHCOR Technologies Cup on Friday of the ‘Pan American’ Tournament, presented by Rolex, at Spruce Meadows. Friday’s competition also included a $34,000 Friends of the Meadows 1.45m competition with a win for Brazil’s Eduardo Menezes and Carushka 2. The ‘Pan American’ Tournament continues with world-class show jumping through Sunday, July 12.

Guilherme Jorge (BRA) is the course designer in the Meadows on the Green this week and set the 1.55m track for 43 starters in the $85,000 ASHCOR Technologies Cup. Fifteen entries jumped clear over the first round course and 14 returned for round two.

Speed was key for a win over Jorge’s jump-off track, but rails fell for many entries on the way to the finish line, and only four combinations cleared the short course without fault. Spooner and Chivas Z, a 16-year-old Zangersheide gelding (Cumano x Lord Gotthard), crossed the timers in 36.97 seconds for the win despite an unconventional finish.

“The jump-off started off fantastic actually and ended with a major chocolate chip,” Spooner laughed. “I absolutely missed to the last jump. I wanted to do one less stride, and then at the last minute I realized that there was a snowball’s chance in hell that we were going to get there. I just kind of dropped the reins and closed my eyes, hoped for the best and sat back so that if something bad happened I wasn’t the first person at the scene of the accident. Somehow he jumped it clear and we were fast enough in the beginning that even with the debacle in the end, we ended up with the win.”

Spooner explained that Chivas Z is not typically the kind of horse that would save the day in a tricky situation like that.

“Not at all actually,” the rider remarked. “The horse is very careful and quite sensitive, and we have been working through little issues, so the fact that he did that for me today – I am flabbergasted and quite impressed with his willingness to carry on even with my gross negligence.”

“He is a wonderful horse,” Spooner added. “He is really sweet and loving. He is a little bit of a nervous-type, a little spooky here and there, but that is what makes him so careful at 16 years old. I have just been so impressed with him during this circuit. He just continues to wow me.”

Menezes Gets a Win for Brazil

Friday’s international competition in the Meadows on the Green got underway with the $34,000 Friends of the Meadows Cup 1.45m and a win for Brazil’s Eduardo Menezes and Carushka 2. The competition saw 53 entries, with 15 advancing to the jump-off and six double clear rounds. Menezes and Carushka 2 were second to go and completed a fast, clear round in 37.28 seconds that would prove unbeatable.

Carushka 2 is an 11-year-old Oldenburg mare (Caspar x Continue) that Menezes has owned for three years.

“She is a winning machine,” the rider described. “She always goes clean and she is super fast, so she is a really fun horse to have for these 1.45m and 1.50m competitions. She is super careful; she jumps clean in 90% of her competitions, so she is a great horse.”

Detailing his jump-off round, Menezes stated, “We know already here at Spruce Meadows that all jump-offs are super fast. They are even faster when you have 15 plus riders in the jump-off, so my plan was to go as fast as possible. I know that I can count on her to go clean, so I was just trying to focus on my job and fortunately everything worked fine for us.”

“We are always pleased to come here,” Menezes added. “I have been coming here now for 15 years and we love it. The sport is always great and we are happy to be here.”

Menezes will jump one more 1.45m competition on Saturday and then heads to Toronto, where he will represent Brazil at the Pan American Games with his top horse, Quintol.

Competition continues at the ‘Pan American’ Tournament on Saturday featuring the $34,000 McDaniel & Associates Cup 1.50m as well as another $34,000 Friends of the Meadows Cup 1.45m.

THERMAL, CA (January 26, 2013) – It was by all accounts a stellar kick-off to the 2013 HITS Desert Circuit Friday, as 38 horse and rider combinations tested themselves in the $25,000 SmartPak Grand Prix, presented by Pfizer Animal Health. Crisp weather and a light drizzle did nothing to dampen the spirits of the riders and only added to the exuberance of the horses, who were friskier than usual and seemed keyed into the excitement of the event.

The significance of the class was heightened by the fact that it was also the first qualifier of the HITS Desert Circuit season for the AIG Thermal $1 Million Grand Prix, presented by Lamborghini Newport Beach, taking place March 17.

Eight made it to the jump-off, and it was Brazilian rider Eduardo Menezes of Carlsbad, California who rose to the top on his own Caruschka. Ashlee Bond of Hidden Hills, California and Little Valley Farms’ Cadett 7 rode to second while hoping for a third appearance in the World Cup this year. Helen McNaught of San Ramon, California and Lariccello, owned by Allison Heafey, came in third.