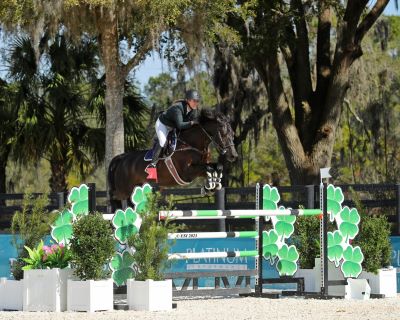 Ocala, Fla. – January 20, 2023 – Perfect weather and a brand-new arena greeted riders for the first week of the 2023 HITS Ocala Winter Circuit at Post Time Farm. Riders gathered at the redesigned Grand Prix Ring featuring Wordley Martin footing for the first major class of the week on Friday during the $25,000 SmartPak Grand Prix. Again, Dorothy Douglas proved to be the best of the best, topping a 12-horse jump-off aboard the speedy MTM Caepten while also placing third with MTM Cedrick after Vicente Guillen piloted Cornut GP to second place.

The HITS Ocala 2023 Winter Series is underway, and Taylor Morrison started off the week strong in the Green 3’9” Hunters at Post Time Farm. The talented young professional took home both of the division’s tricolor awards, piloting Greatness VDK to the championship title and showing Ambition to the reserve championship. 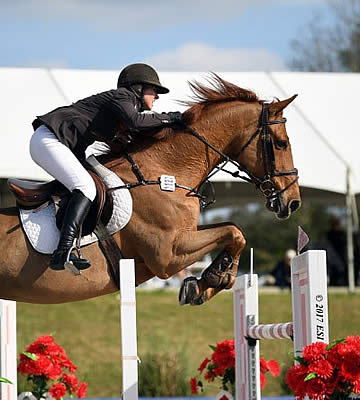 Ocala, FL (February 7, 2017): Dorothy Douglas topped a field of 33 in the grand finale of the Week III at HITS Ocala. Riders and horses descended on Ocala Horse Properties Stadium in search of the top spot on the leaderboard and hopes to take home the biggest slice of the $50,000 prize purse.

Douglas and S&L Elite won the class in a four-horse jump-off that kept the crowd on the edge of their seats. The top two brought home the only clear rounds of the jump-off and were separated by a mere fraction of a second.

Australian equestrian Scott Keach was the first to challenge the abbreviated course piloting Fedor, owned by Southern Cross Equestrian, LLC. They had an unfortunate rail at the third fence on course, finishing the jump-off with four faults in 41.952, proving how quickly the course could be ridden. The time would ultimately be good enough for third place.

Following Keach was Fernando Cardenas of Colombia riding Quincy Car. The pair won the $7,500 U Dump Junior/Amateur-Owner Classic during Week I at the Ocala winter Circuit, but they finished the week in the big leagues in Sunday’s class.

Cardenas and Quincy Car crossed the timers in 44.827 with four faults after a heartbreaking rail at the final fence for the eventual fourth place.

The jump-off course had yet to be mastered until victors Dorothy Douglas and S&L Elite stepped in to compete. They powered through the course, conquering each fence as they flew to the finish. They crossed the timers fault-free in 41.051 for the eventual win.

Following Douglas as the final competitor in the jump-off was Derek Braun riding Lacarolus, owned by MM Family Corp. They chased down Douglas’ time as the crowd cheered them on to the finish line. The clock stopped at 41.521, just a half of a second away from overpowering Douglas’ time on the leaderboard. Their valiant round would settle them in second place.

The top five rounded out with Aaron Vale and Carlo, owned by North Face Farm. They narrowly missed the jump-off round by one time fault in the first round. 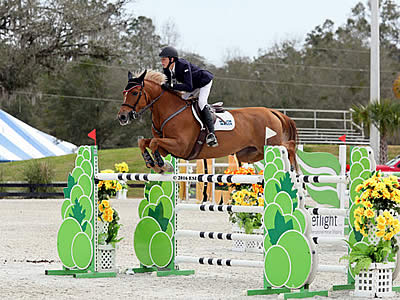 Thirty-four horses and riders took on the challenging 1.50-meter course set by course designer Oscar Soberon of Dallas, Texas. A tight time allowed of 85 seconds in the first round kept the riders on a fast track if they wanted to go clean.

First to go clean and meet the time-allowed challenge successfully was Goldman on her first ride, Morocco.

Andrew Welles of Port St. Lucie, FL, riding Shining De Reve, owned by AEM Enterprises, LLC, was the next to jump clear in the first round, just within the time allowed. Goldman returned with her second mount, Rocs to Riches to produce a third to advance to the jump-off.

The first element of the triple was removed and the course was set for the jump-off with Goldman and Morocco returning first. They started at a breakneck pace, steadying only in one spot after the combination, stopping 36.801 seconds.

Next up was Welles and Shining Du Reve who had two rails for eight faults in a time of 45.154. Holloway and Lucky Strike moved up in the order, in their attempt to catch Goldman, they left out a stride to the skinny vertical at the last fence. While the gamble meant they had the time, in 36.402, they also had the rail, finishing with the fastest four-fault trip to be fourth.

The big chestnut S&L Elite and Douglas took on the course with a plan to leave out strides wherever possible. Indeed, their plan worked, as they took over the lead in 36.194 seconds. Goldman returned with Rocs to Riches but had a rail at the combination, finishing in 37.523 to finish fifth.

Two remained in the jump-off. Chopping and Basje left out a stride in two places to finish in 36.320 seconds, just two-tenths of a second behind Douglas for the win. Schroeder had 4 faults at the combination and a time of 38.080 for sixth place.

“I can’t thank Mike McCormick and Tracy Fenney enough for all of their support. I’ve been working with S&L Elite for three seasons – he’s the first horse I’ve ever had at this level,” said Douglas. “Mike kept telling me, ‘take the step out everywhere; if the jump comes down then it comes down but try to win,’ I think he jumped even better in the jump-off than in the first round.”

Forty riders who have competed in at least three Sunday Grand Prix will qualify based on money won for the Great American Million to be held in Ocala in March, 2016.

Another exciting class kept spectators on the edge of their seats as juniors and amateurs jumped for the top prize in the $7500 U Dump Junior/Amateur-Owner Jumper Classic in the Ocala Horse Properties Stadium at HITS, Ocala. Brian Moggre of Flower Mound, Texas, riding MTM Flutterby, owned by Major Wager LLC, won by a whisker.

The fourteen-year-old equestrian clocked in with a time of 37.561 seconds over Haley Gassel’s time of 37.940 seconds in a head-to-head jump-off for the win. Melissa Ruderhausen of Kennett Square, Pennsylvania, and Charmeur Ask, was the fastest with four faults in a time of 74.526 for third place.

Juniors and Amateurs tried their best to defeat Dallas, Texas course designer, Oscar Soberon’s 1.45-meter course. It proved to be a difficult task as rider after rider collected four faults, many of which were at the oxer-vertical combination at 9A and 9B.

Third in the order was Gassel, of Lenoir City, Tennessee on Quite Dark 2, owned by Westwind Equine Training Center. Their clear round looked like it might be the only one, until the last rider of the first-round, Moggre, came in on the diminutive MTM Flutterby. The striking chestnut with the flaxen mane never touched a rail, insuring a two horse jump-off.

Gassel returned for the jump-off and pulled out all the stops with a tight roll-back to Fence 8, where Quite Dark 2 made an extra effort to be clear before galloping home in the Great American Time to Beat of 37.940 seconds.

Only one rider stood between Gassel and the win. Moggre and MTM Flutterby kicked out in exuberance between the first two fences in the jump-off, losing some time to the clock, but after the combination, they kicked into turbo drive to stop the clock just a fraction faster for the win.

“He who touches the reins the least wins! My horse is the bomb,” said Moggre. “I’ve been riding her for almost a year. She was a sale horse and super green and young but when she started to do so well I took her over and we decided to keep her.”

It was certainly a good day for riders of MTM Farms and trainer Mike McCormick of Flower Mound, Texas. Both Moggre and Dorothy Douglas, winner of the $50,000 Equioxx Grand Prix, ride and train with McCormick.