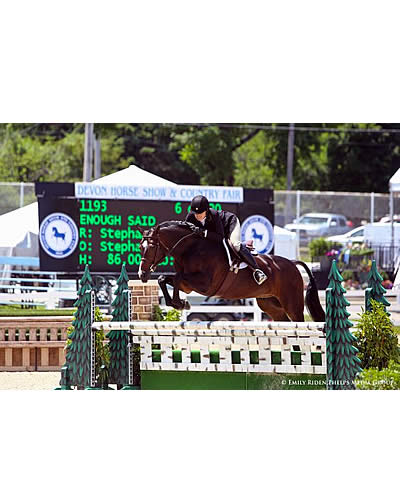 Stephanie Danhakl and her horses have been extremely successful at the Devon Horse Show since her junior hunter days. However, while Danhakl has multiple Devon reserve championships to her name and her horse First Light won the Green Conformation Hunter championship just this week, Danhakl does not yet have a Devon championship title of her very own. That is something that she hopes to change this weekend.

Danhakl got off to a strong start in the Amateur-Owner 18-35 3’3″ Hunters on Friday afternoon with Enough Said, her 9-year-old Warmblood gelding. Danhakl and Enough Said finished second in the first over fences class of the division with a score of 84, and they then picked up the blue ribbon in the under saddle. First place in the over fences class went to Reid Patton and Sincere, who earned a score of 86.

“I got [Enough Said] two [years] ago, and I have been showing him in the 3’3″ Amateur-Owners,” Danhakl said. “He hadn’t shown before I got him, so he was a bit green, but he’s a sweet horse and knows his job. He learned it very quickly. He’s been a great horse for me, and we sort of clicked right from the beginning.”

Originally from California where she trained with Archie Cox, Danhakl made the move to the East Coast to attend the University of Pennsylvania where she received her master’s degree in art history just last week. While pursuing her master’s, Danhakl began training with Scott Stewart and Ken Berkley of Rivers Edge Farm.

“[Scott and Ken] found all of my horses. They have a great eye for a horse,” Danhakl said. “Most of my horses – First Light, Enough Said and Golden Rule – came from Europe and either were doing jumpers. Enough Said might have been a dressage horse before.”

Now Enough Said is performing consistently well in the hunter ring with Danhakl, and she is hopeful that the consistency will continue into Saturday and through the remainder of the Amateur-Owner 18-35 3’3″ Hunter division.

“Devon is a show that I have been for preparing for. It’s always been my dream to really do well here as an amateur and so far, I don’t want to jinx myself, but all of my horses feel great and have been so good. If I can hold it together I hope I have a shot at [a championship], so it’s really exciting,” Danhakl said.

In the Amateur-Owner Over 35 3’3″ Hunters, Dorli Burke also could also have a real shot at a Devon championship. Like Danhakl, Burke rode her own Charming to a second place finish over fences and the win in the under saddle. The blue ribbon over fences went to Missy Luczak-Smith and CS Online.

For Burke, this year marks her first time back in the Devon show ring for a few years and prior to that the first time since her pony years.

“I came here with ponies, so a very long time ago,” Burke said. “I showed in this same ring with my ponies. I am embarrassed to say how long ago that was, but it was a long time ago.”

Burke, of Salisbury, Maryland, now trains with Louise Serio who initially imported Charming, a 10-year-old gelding who has proven to be the perfect fit for Burke.

“He’s actually really easy to ride. I am small, and he has a motor, so he will take me around the ring,” Burke said. “I don’t have to worry about having a lot of leg. He’s really, really brave. He really wants to go over all the jumps, and he tries really hard. He’s really fun.”

Burke continued, “It’s very exciting to do well here. It’s got so much tradition here, and every horse you look at is amazing. To be able to do well against horses like that is what you are trying for.”