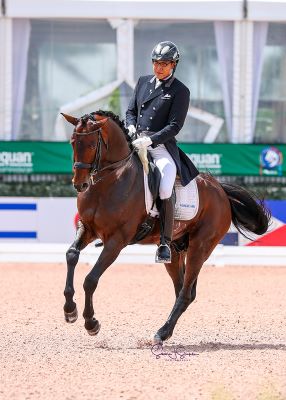 Kim and the 2012 Rheinlander stallion by Lord Loxley I rode to a score of 67.441% to clinch the blue ribbon in the first class of the final week. “Today I really focused on preparing all of my corners,” explained Kim, “and riding a slower tempo because it’s been a little quick, so I wanted to develop more cadence. All of those things went very well, but I also made some silly mistakes on my part. When those small details come together, I think it will be a really solid test.”

Kim has been very successful at the Small Tour levels with the stallion, which he has brought up the levels after partnering with it as a five-year-old. He said, “I brought four horses here, two from Korea and two from Europe, and I was especially happy because I’ve had Lord Nunes since he was five and I developed him a lot by myself. It’s really meaningful that a horse can come from Korea all the way here to the USA and still perform well and be as successful as he’s been.”

In the FEI Prix St. Georges CDI1*, Pablo Gomez Molina (ESP) rode Servus Ymas, Cristina Danguillecourt and Yeguada De Ymas S.L.’s 2013 Hanoverian gelding by San Amour, to a 71.529% to capture the victory. Second place went to Bianca Tota (USA) on Imperial, her own 2013 KWPN mare by Charmeur, with 71.030%. Third was rounded out by Sarah Lockman (USA) on Balia, Summit Farm’s 2012 Westphalian mare by Belissimo, riding to an overall score of 70.765%.