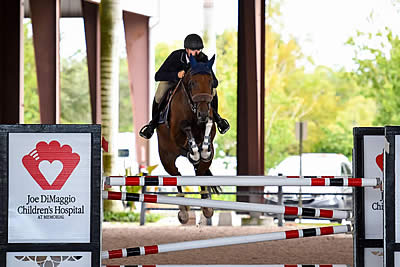 Wellington, FL – October 15, 2019 – The ESP Fall Series launched this past weekend at Equestrian Village with National A and Jumper 3* competition. Celebrating the victory in Sunday’s feature class, the $10,000 Joe DiMaggio Children’s Hospital 1.40m Open Stake was Diego Perez Bilbao of Wellington, FL and his entry, Helios, after galloping through the jump-off timers with a clear round in 37.976 seconds. Alejandro Karolyi of Wellington, FL had success in the class as well, capturing second place aboard Monica Carrera’s Lincourt Gino with a final time of 39.226 seconds and clinching third with Karolyi Showjumping Inc.’s Venitienne after a 39.634-second jump-off.

Following close behind Karolyi with a jump-off speed of 39.88 seconds was Taylor St Jacques of Glen Allen, VA, who rode her Qantar Des Etisses to a fourth-place finish overall in Sunday’s competition. Rounding out the top positions was Juan Hidalgo and Baltazar De Tivoli, owned by Cavalli Reale Stables, after they completed the second round in 44.07 seconds.

Andrew Christiansen designed the 1.40m course, challenging a total of 19 competitors, of which only six pairs completed the first round without faults. “I think the course was fair,” commented winner Diego Perez Bilbao. “It was very fair considering the number of horses that we had in the class and the level of the class for sure.” Perez Bilbao just returned to the Wellington area after traveling quite a bit this summer: “We were up in New York for a couple of months, and then we went to Tryon and Kentucky, and now here, so all around.” Perez Bilbao plans to remain in Florida for the rest of the ESP Fall Series and will be competing with Helios at WEF in 2020. 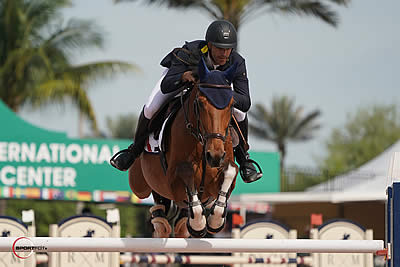 Wellington, FL – The tenth week of the Winter Equestrian Festival (WEF) came to an end with a win for Spain’s Diego Perez Bilbao in the $36,000 CaptiveOne Advisors 1.50m Classic CSI 3* riding Helios.

Michel Vaillancourt (CAN) set the track for the $36,000 CaptiveOne Advisors 1.50m Classic CSI 3* and saw 13 horses advance to the jump-off from a starting field of 63. Bilbao took the win with a double-clear performance in 34.79 seconds, a full second faster than USA’s Katherine Dinan riding Tarioso Mancais for Grant Road Partners, LLC.

“He has all the talent in the world: super careful, so easy to ride, and really balanced. He could be a superstar,” said Perez Bilbao of Helios, a 12-year-old Belgian Warmblood gelding (Couleur-Rubin x Grandeur) he owns in partnership with Adrienne Sternlicht’s Starlight Farms, LLC. “Sometimes his mind is not one of a fighter, but today after the second fence I knew he was fighting for me and we could take some risks.”

On the final day of WEF Week 10, 31 young horse-and-rider combinations contested the course set in the FarmVet ring for the Children’s Hunter Younger division. Due to the high volume of entries, the division was divided into a California Split format, which allowed two young riders to be named champion and two more reserve. The first champion title was awarded to Cassie Warren and the second tricolor ribbon was given to Alexa Elle Lignelli.

Warren and Whipstick Farm, Ltd’s Capo Di Capi took top-three placings in four out of the five division classes to land on a total of 30 points for the section A champion ribbon.

Lignelli piloted the Piccolino Farm, LLC’s Pop Rocks to a first, a second, and two third places which secured them the second-highest total of 24 points.