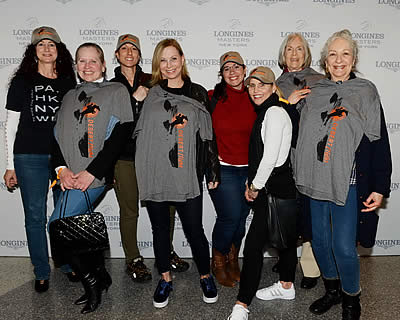 Uniondale, NY, April 29, 2019 — As their cheers filled the air and they pumped their fists, it was clear the eight women who had won the Desert Flight VIP Experience at the world class Longines Masters of New York on Saturday night, April 27, were thrilled. The team behind the Desert Flight movie had done it again and won the hearts and souls of not only that night’s winners but those who had a chance to view the trailer on the jumbotron.

The plan was simple. Each afternoon and evening of this four-day show, April 25-28, after showing the trailer the ringmaster would come out and announce to the audience that he was about to make one group extra happy.

It began with a Desert Flight t-shirt tossed into the stands but in one of those was wrapped a unique VIP Experience. The person or persons who caught the winning t-shirt would go on a fun afternoon or evening journey. Combined with that VIP wristband was dinner in the lounge, souvenirs, and photo ops at some memorable sites around the Nassau Coliseum, before being escorted to the VIP seating area to get the perfect view of this powerful sport.

For the Saturday evening toss, the winning t-shirt was the last to explode into the stands. Suddenly a cheer was heard when a woman caught the final t-shirt and as she and her friends looked inside another screamed. She spied and grabbed the wristband and ran up and down the steps while the group of eight started jumping for joy.

In no time, Desert Flight team leader Stephen Williams, who had come up with the idea, was by their side explaining what they just won and guiding them down the stairs to kick off their evening.

The years that led to this evening started with a vision and when the Desert Flight team threw their hat in the ring with those creating equine films, they did it with a purpose. Produced by Tell Studios in association with Samia Staehle’s Filter 4 Productions, the documentary is a compelling look at the horses and riders that compete in this highly demanding sport.

Executive director, Staehle, who competes herself, wanted to show the drive that it takes to be the best in the sport, and the compelling bond that is the only way to make the horse and rider team successful in competition. The goal was to create a film that would become a love letter to the sport of show jumping. It wasn’t long before Desert Flight became just that, evoking heartwarming emotions from everyone who watched or took part in it.

Since its inception, Desert Flight has been traveling the globe and has been showcased at some of the world’s most eminent equine events. In 2018, that journey took them to the World Equestrian Games in Tryon, NC and later that year to the prestigious EQUUS Film Festival where the film won Best of Festival as well as Best Sports Documentary. Since then it’s been traveling to cities large and small enriching the hearts of many and this evening was no exception.

Meeting Some of the Desert Flight VIP Experience Winners

Among the members who will cherish the memory of this unique opportunity was this group of eight friends who decided to enjoy their first horse show together, since how often do you get a world class horse event right in your own backyard? Encouraged by their colleague, Karen Pekarne, from Little Neck, Queens, they decided to have a girls’ night out never realizing how special it would turn out.

When Karen caught the flying t-shirt that revealed the winning wristband the team of eight were over the moon ready to enjoy their magical night. When given the choice of heading to get some nourishment, their minds were focused on only one thing. What they wanted most was to watch all the world class horses from their VIP seats.

“It was a total surprise and makes a great evening even better,” commented Karen as she and her friends posed for pictures.

While rushing off to catch up to her friends before the class began, she yelled back, “I’m excited to see the performances and the beautiful horses. This is really going to be a wonderful night.”

After the night was over, Karen couldn’t contain her thrill for what she and her friends had experienced. “The competition was exciting and different from anything I’ve ever seen. I loved the way the class was run. The riders and horses were just spectacular and talented and gorgeous to watch. We also attended the after party — so fun!”

On Sunday it was a family of four that caught the elusive t-shirt and wristband. Mackenzie Wood, who lives in New Hampshire, had never seen a horse show of this caliber before. So her father surprised her with tickets to the show. She went with her parents and grandfather and was overjoyed when the VIP Experience was added into the mix.

“It was so cool to catch the t-shirt and I was super excited to get the VIP Passes,” she commented as she and her family were getting ready for the competition to start.

Thanks to Desert Flight, a fun-filled afternoon and evening really did get even better!

Just What Is Desert Flight About?

Enamored by the horses, they all wanted to know more about the Desert Flight movie and how they could see it. In fact, this documentary short film delves into the unique relationship with the horse and why those who have been bitten by the horse bug dedicate so much time and energy to their equestrian life.

It is that sense of bonding and the visceral way in which horses enrich our lives and heighten our senses that the team of writers and videographers succeeded in capturing. It shows the strong passion and love that comes with being one with your horse and the incredible connection that these horse show people share. Whether it’s a child with a backyard horse, or an Olympian competing at the highest level, that horse-human bond is very strong.

Initially, the goal was to do something modest, just a 4-5-minute piece. However, that soon changed and grew like the branches of a tree into a full 39-minute documentary.

The film features some of the top equestrians, even some Olympic gold medalists and hearing their stories will melt your soul. The beauty is that even their candid honest words will touch your core as you attempt to hide a few tears.

If you are one of the few who has not seen this film, don’t despair: you can stream it for free via the USEF Network. For those who are not yet members of US Equestrian, a free fan membership is available to anyone using the promo code “desertflight” on the federation’s website (https://www.usef.org/network). For additional information, visit www.desertflightmovie.com and follow #desertflightmovie on social media.

US Equestrian and the producers of the new equestrian documentary “Desert Flight” invite you to the film’s USEF Network premiere on Tuesday, Jan. 15. The 39-minute documentary, a love letter to equestrian sport that examines the joy horses bring to our lives, will stream free on demand for US Equestrian members on USEF Network. To take advantage of this special opportunity, go to US Equestrian or sign up for a free fan membership using the promo code DESERTFLIGHT.

“Desert Flight,” which received awards for Best of Festival and Best Sports Documentary at the EQUUS Film Festival in September, follows the stories of several top jumping athletes and reveals how they got their start in horses and why they love equestrian sport. Riders appearing in the film include Olympic team gold medalist Will Simpson, Richard Spooner, Rich Fellers, Ashlee Bond, and Mandy Porter. Impressive desert scenery serves as the backdrop for horses and riders as they aim to peak for the AIG $1 Million Grand Prix at the end of the 2017 HITS Thermal winter circuit.