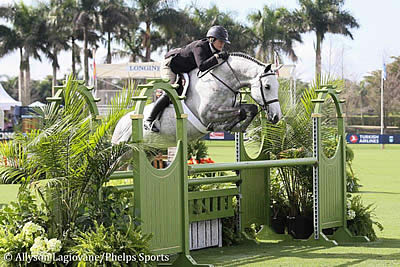 Wellington, Fla. – Mar. 5, 2019 – Hot off her victory in the $100,000 WCHR Peter Wetherill Palm Beach Hunter Spectacular just two weeks ago, Victoria Colvin added another prestigious title to her long list of accolades. Colvin and El Primero, owned by Meralex Farm, bested some of the nation’s most talented hunter horses and riders at Deeridge Farms on Sunday afternoon for the conclusion of the final class of the Palm Beach Masters Series, the $50,000 USHJA International Hunter Derby. Colvin captured the top prize for the second year in a row, defending her title as the reigning champion aboard Brad Wolf’s Private Practice in 2018, and also rode multiple other mounts to top results throughout the Deeridge Derby weekend.

“Winning this class two years in a row is a wonderful feeling. El Primero has been an amazing partner this year, and I’m excited to hopefully keep earning champion ribbons with him,” commented Colvin. “He really tried his heart out, and I’m so pleased with the way the weekend went for all of the horses I was lucky enough to be able to ride. They were all superstars!”

Colvin and El Primero led the class from start to finish, having remained in top form Sunday after dominating the classic round on Saturday ahead of 41 other pairs. No stranger to pressure, Colvin was last to ride Sunday in the handy round, and once again proved her talent with a series of savvy inside turns that capitalized on El Primero’s incredible jump. The young professional also ride Gabriel, owned by JT Farm, to an overall tenth place finish in the competitive class.

Earlier in the weekend, Colvin rode Snowday, owned by John and Stephanie Ingram, to an impressive first prize in the $2,500 3’9″ Green Incentive Stake. In the $2,500 USHJA International Welcome Stake, Colvin piloted El Primero to second position overall, and also had another ride in the top results, with Gabriel jumping to sixth in the rankings. Gabriel matched his efforts in the $2,500 3’6″ Green Incentive Stake, navigating the expansive grass field at Deeridge Farms to high marks from the judges that ultimately earned him sixth place.

At only 21 years old, Colvin has certainly solidified herself as one of the best hunter athletes in the country, having championed major classes across the country, many of them multiple times. In the last year alone, Colvin won her second USHJA International Hunter Derby Championship, making her only the second rider to have won the event more than once, as well as her fifth $100,000 WCHR Peter Wetherill Palm Beach Hunter Spectacular and now second $50,000 USHJA International Hunter Derby during the Deeridge Derby. Currently working with a strong team of people and horses in her corner, Colvin shows no signs of slowing down, and hunter fans can expect to continue to see her name in the winner’s circle.