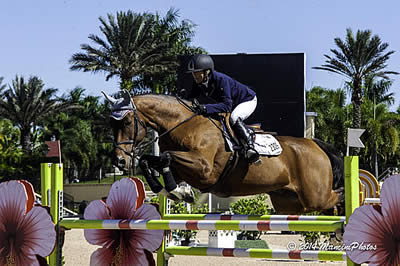 Twenty-four entries started in round one and just three combinations were able to jump clear to advance to the jump-off, where Stephens and FYI completed the only double clear round in 46.22 seconds for the win. Michael Morrissey and Starbit Partners LLC’s Padie Blue Cardu had four faults over the short course in 44.99 seconds to place second. Cara Cheska and Windswept Farm’s Imprimis finished third with eight faults in the jump-off in 45.41 seconds. A tight time allowed kept a few others with clear jumping efforts out of the second round.

Stephens has owned FYI, an 11-year-old Oldenburg gelding (VIP x Zeus), since the horse was four years old. After showing him a little when he was younger and then leasing him out for a few years, she decided to finally see what the horse could do at the grand prix level.

“I bought him because he was sired by a horse that I had owned named VIP,” Stephens explained. “VIP didn’t really do a lot of breeding, but all of the horses that are by him are unbelievable. I have had other great horses such as CEO and MVP that I named with initials like him. It is a breed that I love, and they are all amazing jumpers.”

“FYI is just a horse that, because of his bloodlines, I have always thought a lot of him,” Stephens continued. “I didn’t really know how much he could do or could not do. I just got him back off of a lease and I thought that since he is coming 12 years old, he is at a perfect age, and I decided to start showing him and see if he could really be a top grand prix horse or not. This was his maiden voyage to see if he can do it, and he certainly did it.”

Stephens praised Sunday’s course for being set at a high standard and acknowledged the team at Equestrian Sport Productions for keeping all of their shows at PBIEC up to that level.

“I have to commend them because they really have a high standard, whether it be at the fall series or during the winter at WEF. When you go there and you ride in the International Ring, no matter what you are going for, they always keep that standard up,” she commented.

Detailing her jump-off round, Stephens noted, “I only saw the one ahead of me in the jump-off and as I was going in, they were saying that there was no one clear, but even with that, the strategy to me was go for it because you have to win either way. You either win by going clear and fast or you win by maybe having four and going faster than everybody else. I didn’t change my strategy. With only three, I said, ‘You know, I have to see what this horse can do.’ I think the faster he went, the higher he jumped, so it was great.”

“He is very quiet and easy, so I can’t take that much credit,” Stephens laughed. “If anything, he needs a bit of a legging ride. He is not a lot of blood, meaning he is not charging toward the jumps, but he is really careful and very easy to ride. He doesn’t spook, he doesn’t look. He is very scopey and he doesn’t want to hit the jumps, but you do have to have a lot of leg.”

Stephens plans to show FYI again next week and will then compete in a grand prix in Venice, FL the following week. The horse will then come back to compete this winter at the Winter Equestrian Festival.

A $10,000 Open Jumper Stake Class was held on Friday, October 24, during the Fall III competition with a win for Emanuel Andrade aboard his horse Bon Jovi. The class saw 24 entries with seven clear rounds to advance to the jump-off where Andrade and Bon Jovi jumped the fastest of seven double clear rounds in 36.42 seconds. Michael Morrissey and Rae Marie Kennedy’s Torino Q finished second in 38.60 seconds. Luis Larrazabal and San Francisco Stables LLC’s G&C Up Close placed third in 40.40 seconds.

Andrade also took top honors in the $7,000 Open Jumper Stake during the Fall II competition one week prior. In that class, Andrade finished first and second with double clear rounds in a three-horse jump-off. He won with Maria Alejandra Andrade’s Tinkerbell S.C.H.Z. and placed second aboard Ecurie Michel Hecart’s Nokia de Brekka.

In the $10,000 Fall I Open Jumper Stake, Victoria Karam and Elena Couttenye’s Good Boy HM were the winners with the only clear round out of 22 entries. Claudia Billups and Platini VDL and German Cathargo and Centurio each finished with two time faults. Billups was slightly faster to take the second place prize and Cathargo placed third.

The five-week ESP fall circuit began October 10 and continues through November 16 featuring top hunter/jumper competition at PBIEC. The series will host its second grand prix competition coming up during the Fall Finale Horse Show. The $25,000 Fall Finale Grand Prix will be featured on Sunday, November 2.

The horse shows of the 2014 ESP Fall Circuit are all United States Equestrian Federation (USEF), North American League (NAL), and Marshall & Sterling League (M&S) approved. A $10,000 Open Jumper Stake class will be held at all shows as well as $500 Pony and Hunter Classics. All shows will also highlight great competition for child, junior and amateur jumpers, including Classics.

To view the prize list and for more information, please visit www.equestriansport.com.

Wellington, FL – January 25, 2012 – Week three of the FTI Consulting Winter Equestrian Festival started with a day full of competition, and the main class in the International Arena was the $8,000 G&C Farm 1.45m Jumpers. Debbie Stephens of Palmetto, FL, was victorious on Swagger, owned by Centennial Farm.