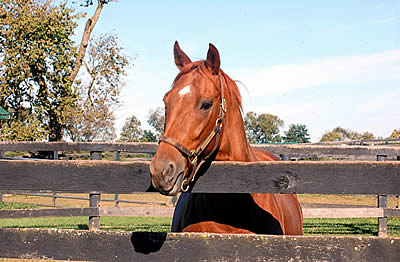 Named for a resident at Old Friends, the Thoroughbred Retirement facility based in Georgetown, KY, The Daytona Stakes pays tribute to the six-time graded stakes winner whose career earnings totaled nearly $1 million. Overall, the son of Indian Ridge, bred by the Irish National Stud, scored 8 wins, 2 seconds, and 3 thirds in 18 career starts.

In 2008 Daytona started in the Breeders’ Cup Mile at Oak Tree against the formidable Goldikova. Injured during the race, he finished 10th. It would be his final start.

Following his racing career, Daytona, a handsome chestnut, made an attempt at a second career but soundness issues prevented him from continuing.