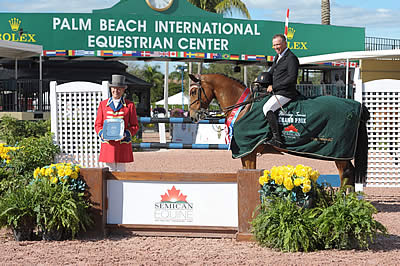 Wellington, FL (January 2, 2019) – Excitement is already beginning to build in Wellington, Florida as top equestrians from all over gather together to compete against the best sport horses and riders in the world. This week, while most people were off enjoying a relaxing holiday break, riders Todd Minikus and David Oliynyk were hard at work and jumping their way to winning shows sponsored by Semican.  On Sunday, Minikus claimed the blue ribbon at the $30,000 Semican Grand Prix to conclude 2018 ESP Holiday III competition at Palm Beach International Equestrian Center (PBIEC), and David Oliynyk rode to victory at the $5000 USHJA National Hunter Derby sponsored by Semican.

Riding his own 2008 Belgian Warmblood gelding, I Dottori VD Richter (Winningmood Van de Arenberg x Heartbreaker), Minikus jumped against 17 competitors to finally clinch the jump off with a time of 45.858 seconds. “I thought it was a pretty nice course for a $30,000 Grand Prix,” Minikus described. “There ended up being 5 horses clear, and I got the luck of the draw and got to go last in the jump-off,” he added.

The excitement continued when Oliynyk dominated the $5000 USHJA National Hunter Derby aboard Laurie Gaudet’s Generous with a score of 179.5 to bring home the blue.  As a company based in Canada, Semican was thrilled to support the Wellington sport horse community by sponsoring these exciting shows. 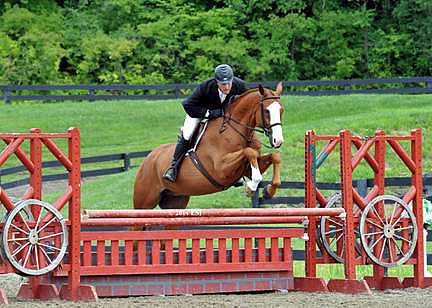 ©ESI Photography. David Oliynyk and Generous on their way to another Diamond Mills $500,000 Hunter Prix Final with a win in the $5,000 Devoucoux Hunter Prix.

SAUGERTIES, NY (July 21, 2014) – David Oliynyk has spent six years in the tack of Lori Gaudet’s Generous and their lengthy time together is paying off in high scores and dollar signs. Boasting a second-round score of 92, Oliynyk and the 11-year-old Dutch Warmblood gelding topped a field of 35 starters to win the $5,000 Devoucoux Hunter Prix at HITS Saugerties.

“It’s nice to ride one for long enough that you form a relationship,” said Oliynyk. “Horses are never predictable but I’m as close as I can to knowing his every move. Or maybe it’s just taken me this long to learn to ride him,” he joked.

Oliynyk admits that with time and experience, Generous has perfected his consistency. Advancing to the second round with a high score of 89, he was better than merely good against the top twelve – he was unstoppable. Tackling the bank on the HITS Saugerties Outside Course with ease, Generous appears to be in prime form for a successful showing in the Diamond Mills $500,000 Hunter Prix Final this September at the HITS Championship.

“Generous and I have competed in the final every year since 2011 and were sixth twice,” said Oliynyk. “The goal is always to make it to Sunday and show off for prize money that we don’t see anywhere else.”

The temps were warm and the Hudson Valley breezes were subtle on Saturday – a perfect day for hunters to shine. Oliynyk’s score of 181 was the winner, but Melissa Feller of Lincoln Park, New Jersey did her best to chase him down in the second round. She piloted Sarafino to an 89 for Elizabeth McFadden to combine with an 87 and second place.

Hannah Isop of Pawling, New York collected an 85.5 and 86.5 for third in the irons of Tracy Freels’ Red Ryder. Kristen Bumpus of Concord, Massachusetts posted an 86 and 83 to earn fourth on Catherin Mooney’s Delorean. David Raposa of Clinton, New York rounded out the top five on Redfield Farm’s Count Down with scores of 82.5 and 84.5.

The weekend’s Devoucoux action kicked off summer qualifying for the Diamond Mills Hunter Prix Final, which continues through Week VII in late August. The Final takes the stage at the HITS Championship and welcome riders to jump for a piece of the coveted $500,000 pie.

$1,500 Platinum Performance Hunter Prix
Fifteen-year-old Lena Reeb of Weston, Connecticut pocketed scores of 84 and 83 in Sunday’s $1,500 qualifier on her quest for the Platinum Performance $250,000 Hunter Prix Final. She and Call Me, owned by Reeb’s trainer and mother Leslie Kogos, led the first round into the top-12 contest where consistency and finess won her the blue.

Montana Holmes of Weslaco, Texas rode Big Bang, owned by Maddy Chenoweth to a final score of 165.5 for second. Amy Lloyd Thompson of Chester Springs, Pennsylvania was third in the irons of Elizabeth Lloyd’s Paramount with a score of 159.5. Isabella Usenza of Albany, New York piloted Monty Kelly’s Sebastian to a 147.5 for fourth and Hannah Mueller of Jamesville, New York rounded out the top five aboard Montreal for Cazenovia College with a 146.

Platinum Performance Hunter Prix qualifiers will be offered weekly throughout the Saugerties and Culpeper summer circuits before the final returns to the HITS Championship this fall and offers junior and amateur hunter riders the opportunity to show for exciting prize money over thrilling courses. 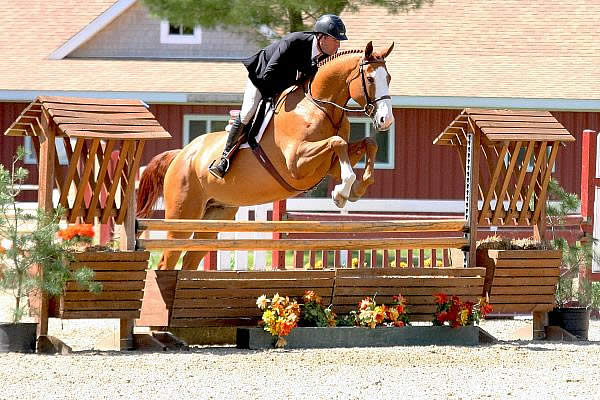 Halifax, MA – May 16, 2013 – Blue skies welcomed competitors back into the Main Hunter Ring on the second day of the Fieldstone Spring Festival. The professional hunter divisions wrapped up this morning with a strong finish by David Oliynyk, who claimed the Performance Working Hunter Championship and Reserve Championship aboard his two mounts, while Thomas Hern and Picture Me were awarded the championship title in the Pre-Green Hunters. The Amateur-Owner Hunter division got off to a great start this afternoon with Lisa Foster and Castleguard taking blues in both over fences classes.

The Performance Working Hunters were up first in the Main Hunter Ring. Many competitors laid down solid trips, but it was ultimately David Oliynyk who claimed both the championship and reserve championship for the division aboard his mounts Generous and Cascor’s Splendor.

Oliynyk and Generous rode to the top of both classes in today’s competition, taking a clean sweep over fences. His two first place wins today, in addition to his two firsts and one second from yesterday, secured him the title of champion. Generous is owned by Lori Gaudet of Lexington, MA, and when he is not winning Performance Working Hunter classes with trainer Oliynyk, he can be seen in the Adult Hunters showing his owner the ropes of competition.

“Generous just has the mentality to do that; it’s taken a number of years for that to happen but now that he is 10 years old, he is much better about going in and doing the Adult Hunters,” smiled Oliynyk. “I think he is more experienced now; when he was younger he was not as tolerant. I will take Generous in the 3’3″ Fieldstone Derby. He feels great, but jumping out on the field is a whole different ball game so anything can happen. He has been out on the field before, so I am looking forward to repeating that experience.”

Not far behind was Oliynyk’s second mount, Cascor’s Splendor, an entry owned by Maria Moalli of Groton, CT. The pair received a second and third place over fences this morning, good enough for the reserve championship.

Oliynyk was pleased by the improvements he saw in both horses, noting, “I though they both felt even better today, even more relaxed. I thought they both jumped very well and rode very easily. I think they both improved today, just by going around again. The weather was very nice today; there was no wind; it was a nice environment for them to kind of just go in and comfortably go around. I wanted to get some consistency out of both of them so they are prepared for the weekend, whether that’s jumping in the derby classes or jumping for their owner. Whatever it is they are going to do, I want them to feel comfortable in the ring and happy about what they are doing.”

Next, the Amateur-Owner Hunters took their turn in front of the judges. Lisa Foster and Castleguard were on top of their game today; their solid performance in the first over fences class and brilliance displayed in the handy put them on top in both. Other ribbon winners included Upper Ten and Laura Kadane, taking home a second and a fourth, and Rain King with Nora Keefe in the irons, claiming the third.

“I was very happy with my horse because we haven’t shown since Week 12 of WEF, so I was glad that he went around and did what I asked in all of my trips. I love doing handy classes with him, because despite his large size, he is very agile and great at turning,” explained Foster. “We were able to create a couple of sharper turn options, and then really step it up and do a bold hand gallop to the last jump in the handy. Doing the handy class is a lot of fun with him.”

Foster continued, “I bought Castleguard as a 3-year-old, so I’ve had him for about 10 years. I ride with Tommy Serio, so way back when Tommy did him in the Pre-Greens, and then I’ve been doing him in the Amateurs. We had a great winter; he was Reserve Circuit Champion at WEF so he had a well-deserved vacation after that. This is his first show back, so we are just getting the rust off and getting going again. Tomorrow, I want to make sure he gets in the ring in the morning and is quiet, and then hopefully he will do his part and I will do my part.”

Rounding out the hunter action today was the Pre-Green Hunter division, where Picture Me was named division champion with Thomas Hern in the irons. The pair added a first and a second over fences to their first and third from yesterday. Picture Me is owned by Jennifer O’Donnell of Somerville, MA.  Garnering reserve championship honors with a first, second, and third was Kristen Bumpus and Chiquita, a Louisa Kania entry out of Peterborough, NH.