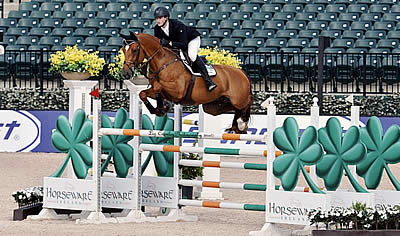 Mill Spring, NC – July 6, 2016 – David O’Brien (IRL) and O’Splendido sat atop the leaderboard early on in the $35,000 1.45m Horseware Ireland Opener CSI 3* at Tryon International Equestrian Center (TIEC), maintaining the lead to secure the win with a faultless round and a recorded time of 60.800 seconds. Coming in a close second place with a time of 61.250 seconds was Todd Minikus (USA) aboard Vita 24, while third place honors were awarded to Amanda Derbyshire (GBR) and Cannavaro BH with a time of 61.820 seconds.

O’Brien and O’Splendido, a 2002 Selle Francais stallion (Burggraaf x Voltaire) have been partners for close to a year, building their relationship and contesting multiple FEI classes representing the nation of Ireland. The pair finished second in last week’s Tryon Summer I $35,000 1.45m Horseware Ireland Opener CSI 3* and this week they kicked it into a higher gear to secure the win.

O’Brien went on to speak of the tough track set by Martin Otto (GER), which allowed for varied distances between fences, tight inside turns, and finished with a long gallop down to the last oxer.

“I did eight in the first line, allowing me to set up the tight turn that followed,” noted O’Brien. “I also chose the inside turn, which I believe saved me a lot of time on the clock.”

“With this horse, I gradually get faster as the round continues on, which gives me the ability to take out a stride here and there. I always start out steady, organize my turns, and then move him up steadily throughout the course. He really kicked into an extra gear for me today,” he added.

O’Splendido is a veteran to FEI competition and has plenty of experience in international competition. O’Brien commented on how he uses their combined knowledge to an advantage in the ring, saying, “My horse is older, so he knows how to perform. The speed class is his forte; his ears are pricked, he turns tight, and he really enjoys it. When he puts his eye on that first jump, he is so game, especially in that ring. He is on the job.”

O’Brien expressed his gratitude for Lisa Lourie and Spy Coast Farm for allowing him to not only compete on O’Splendido, but also provide the opportunity to bring multiple young horses up through the ranks.

“I just have the one horse to compete with at the elite level and the rest that I show are young Spy Coast-bred horses. Competing with the young horses makes the FEI classes possible and also makes wins like today so special,” he detailed. “I am so lucky that Lisa allows me to come to these shows and compete on her incredible horses. I am very thankful for her.”

TIEC continues with competition throughout the remainder of the week, hosting the $35,000 1.50m Suncast® Welcome CSI 3* on Thursday, July 7. “Saturday Night Lights” will return presenting the $130,000 Wellington Equestrian Realty Grand Prix CSI 3* beginning at 8:00 p.m. Premier AA Hunter divisions will run throughout the week, featuring the $10,000 Pre-Green Incentive on Thursday, July 7, as well as the $2,500 USHJA National Hunter Derby on Friday, July 8. The $5,000 Pony Hunter Derby will take to the George H. Morris Arena on Saturday, July 9.

For more information and to see a full list of results, please visit www.tryon.com.