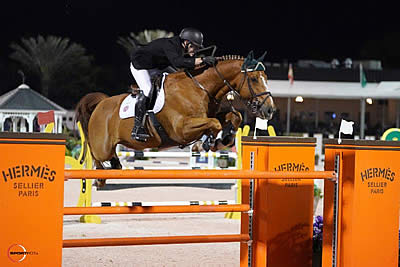 Wellington, FL – March 1, 2019 – For the second time in a row, David Oberkircher (USA) rode Upper to an Under 25 grand prix victory at the Winter Equestrian Festival (WEF) in Wellington, FL, this time topping the $36,000 Hermès Under 25 Semi-Final Grand Prix CSI U25 on Friday, March 1, at the Palm Beach International Equestrian Center (PBIEC).

It was a race to the finish for 43 competitors in the $36,000 Douglas Elliman Real Estate 1.45m Classic CSIO4* on Friday afternoon over a course designed by Steve Stephens (USA). There were eight clear rounds in a speed format, and the fastest of those was Kristen Vanderveen (USA) on Bull Run’s Divine Fortune, who finished in a time of 62.43 seconds for victory.

It was a sweep for the ladies in the top five spots in the class. Zoe Conter (BEL) and Stephex Stables’s Dolitaire Chavannaise were second in 63.12 seconds, while Eve Jobs (USA) rode her own Limbridge to third in 64.45 seconds. Lauren Hough (USA) and her own Joblesse were fourth in 64.94 seconds, and Petronella Andersson (SWE) rounded out the top five with Stephex Stables’s Bacardi 188 in a time of 65.11 seconds.

This was the sixth FEI ranking class win at the 2019 WEF for Vanderveen, which she has accomplished on four different horses. These classes mean a lot for the 29-year-old rider.

After seeing a total of 30 horse-and-rider combinations navigate the course in the Rost Arena at the Palm Beach International Equestrian Center, judges ultimately awarded both over fences first place ribbons to Joan Ehrhart of Wellington, FL and Coachella. The two victories, along with another second place, was enough to secure the pair the champion ribbon for the Low Adult Amateur Hunter Section A division during Week 8 of the 2019 Winter Equestrian Festival.

Ehrhart rode the 17-year-old Warmblood gelding for the ownership of Sloan Hopson and trains with her daughter, Jane Ehrhart. 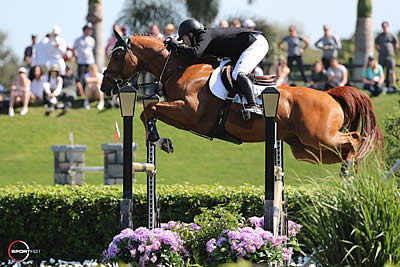 Wellington, FL – February 17, 2019 – The sixth week of the 2019 Winter Equestrian Festival (WEF) concluded on Sunday, February 17, with jumper competition on the grass derby field at Equestrian Village at the Palm Beach International Equestrian Center (PBIEC) in Wellington, FL. David Oberkircher (USA) and Upper, owned by Southfields Farm LLC, rose to the top of the $25,000 Hermès Under 25 Grand Prix.

Riding out on the beautiful grass derby field in the morning, some of the best up-and-coming show jumpers in the world competed for top grand prix honors. There were 43 entries in the class, with 13 of those going clear to advance to the jump-off.

Taking advantage of an opportunity to show on the grass derby field at Equestrian Village, the individual silver medalist at the FEI World Equestrian Games™ Tryon 2018 was able to speed to the lead of the class. Martin Fuchs (SUI) rode Jacques Bodenmuller’s Cristo to a blazing time of 33.733 seconds to win the $25,000 CP Grand Prix, the closing event of WEF 6.

Twenty-four entries went to task on the first round, and five went clear to contest the jump-off. Fuchs went first on Cristo, setting an unbeatable time.

“I didn’t really like that I was first to go with him,” said Fuchs. “I would have preferred that my inexperienced horse was first to go so I could do a normal round with him, and then do a quick round with Cristo, to see how fast I had to go. Since I honestly really didn’t know the other riders in the jump-off, I just thought I didn’t want to be second, so I took the forward option, which was good, but now I ended up being quite a lot faster.”

The final day of WCHR Hunter Week at the 2019 Winter Equestrian Festival came to a close on Sunday, February 17, with top junior and amateur hunter riders returning for one final day of special competition. Well-braided horses and riders in shadbellies once again took to the International Arena at the Palm Beach International Equestrian Center as the day kicked off with the $5,000 Peggy Cone Memorial WCHR Adult Hunter Classic.

As one of the largest classes of Hunter Week, the classic saw more than 70 top hunter combinations contest for a chance to make the top-12 callback for the second round of competition. Coco Fath of Fairfield, CT and Akinda were late in the order of go for the first round, but rocketed right to the top of the leaderboard with a top score of 89.00 points for their effort. While 11 of the class’s best-scoring riders returned before Fath to contest the second course, none could overcome Fath and the Hillside Farm LLC’s 13-year-old Warmblood mare. The team’s second round score of 81.00 points gave them a combined total of 170.00 points which was 2.5 points higher than second place winner Ava Lindsay and Fabricio 23. 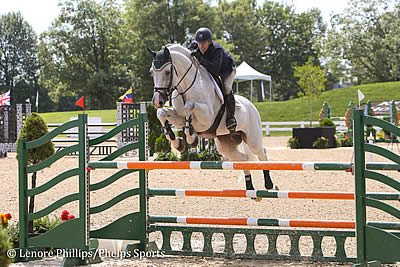 Lexington, Ky. – July 27, 2018 – Jumper competition returned the Rolex Stadium Friday at the Kentucky Summer Horse Show presented by Kentucky Horse Shows, LLC. David Oberkircher, who arrived in Kentucky on Thursday, dominated the day by winning the both the Medium and High Junior/Amateur Owner jumpers. In the Medium division, Oberkircher piloted Castelino Van De Helle to a win over a field of 28 entries with a double clean effort and quick jump off time that clocked in at 34.907.

Unlike Thursday evening in the $25,000 Hagyard Lexington Classic, which saw only three clear rounds of 44 starters, 11 of the 28 riders that competed in the Medium Jumpers produced double clear efforts. Oberkircher, who has recently started a new career that leaves him less time to compete at horse shows, knew that he had a chance with his veteran stallion. The 15-year-old Holsteiner, who is owned by Southfields Farm, LLC of Collegeville, Pennsylvania, seamlessly navigated the course that consisted of 13-expertly placed fences. Although the pair has not shown much together over the last year, due to some minor injuries that the stallion sustained, they picked up a gallop and took a dominating lead by more than a second. Sohpia Studd and Hera-V placed second with a jump off time of 35.375.

Earlier in the day, Oberkircher and another one of his mounts, Upper, beat 14 other horse and rider combinations in the High Junior/Amateur Owner class with a double clear effort and jump off time that was two seconds faster than the second place competitor. The Pennsylvania native, who trains with the husband and wife team of John Roche and Chelsea Sundius at JR Show Stables, plans to compete in the $50,000 Rood & Riddle Grand Prix Saturday as well as the Under-25 Jumper Classic on Sunday.