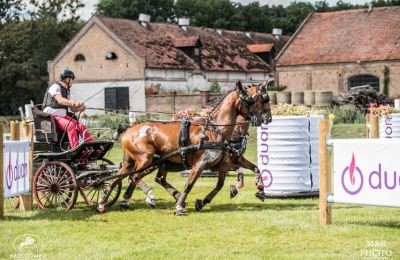 Baborówko, September 3, 2022 – Day 2 of Baborówko Driving Show 2022 is already behind us. The athletes had to conquer the Section A, at the length of about 6 kilometers, and the B Section of marathon obstacles, measuring almost 9 kilometres. The key was speed, precision, and accuracy.

In the four-in-hand, for the trophy of BADIX, the best one was Austria’s Daniel Schneiders driving DANCINGSTAR, ENRIQUE H, GHANDI, and FANNO. Second went to the world ranking leader Boyd Exell (AUS) with CELVIRO, CHECKMATE, HERO, and IVOR.

“We were considering our performance at the World Cup 2.5 weeks from now, so we tried to go smooth and fast without taking any risks. And the course here is great. An amazing audience and organization of the competition together with the patron of the event, who did everything to make us feel good here. We would very much like to come back next year,” said Boyd Exell.

In the pairs competition, for the trophy of Kuhn, the fastest one was Poland’s Marek Baryłko with JUP LIBERATOR and JISKEFET. Second place went to his compatriot Szymon John with NICO and FAVORY FONIX, and third to Rens Egberink (NED) with KULANO and JEAMON VAN DE MARTHA HOEVE TEXEL.

Livestream prepared by Świat Koni is available at www.equestrian.baborowko.pl.

More information can be found at: www.equestrian.baborowko.pl. 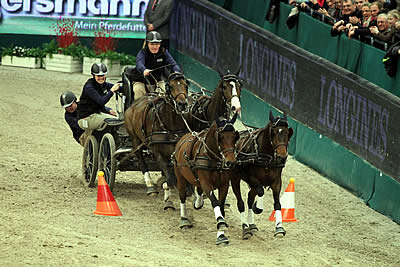 Daniel Schneiders (GER) and his four-in-hand team on their way to victory in the last qualifier of the FEI World Cup Driving 2013/2014. Photo Rinaldo de Craen/FEI.

Following his first FEI World Cup Driving start in October 2012 in Hannover (GER), where he competed on a wildcard, Schneider had set himself the goal for the summer of 2013 to qualify for the upcoming indoor season. After Christoph Sandmann (GER) and Chester Weber (USA) decided not to compete in the series’ 13th season, the German became the 10th driver qualified for the FEI World Cup Driving 2013/2014. After his win in Stuttgart, where he beat four-time FEI World Cup Driving Champion Boyd Exell (AUS), the 32-year old driver was the best again in Leipzig.

Dr Wolfgang Asendorf (GER) had designed a very good course, which was appreciated by the spectators and the competitors alike.

Schneiders, who recently sold his outdoor four-in-hand team in the USA, used the 13-year old KWPN Hermes as his wheeler horse for the second time this season. After his somewhat disappointing results at London Olympia where he had driven the gelding for the first time, Schneiders was now able to make full use of the horses’ potential, which resulted in two fabulous clear and fast rounds. Being the second man in the arena in the winning round, Schneiders decided to see how fast his team would go. The former pony four-in-hand driver crossed the finishing line in an incredibly fast time and the spectators in the sold-out Messehalle in Leipzig rewarded his phenomenal performance with a deserved standing ovation.

Last man in, IJsbrand Chardon, could afford one ball down, but after a second knockdown, he knew his chances for victory were lost. Chardon had to make a change in his team after one of his wheeler horses was slightly injured before he left for Leipzig. His relatively new trump Feles replaced the Lipizzaner gelding Fegyenc and Chardon was very pleased with him.

Reigning FEI World Cup Driving champion Koos de Ronde had a setback at the horse inspection where his most experienced wheeler horse Mario was found not fit to compete. The 20-year-old piebald gelding was the horse which De Ronde could not afford to lose. He had however to settle for Palero in the right wheel instead, a position to which the 10-year old gelding is not used. De Ronde was however to make the most of this change. In the first round, the Dutch driver experienced slight miscommunication with his horses in one of the marathon obstacles, which cost him precious seconds and a ball down. Luckily for him, last starter Michael Brauchle (GER) was unable to match his good performance in the warm-up competition, which he had won, and finished in sixth place, allowing Koos de Ronde to move up to third.

Tomas Eriksson (SWE) knocked one ball too many down and finished in fourth place, just ahead of wildcard driver Georg von Stein (GER), who had two knockdowns as well.

Quotes:
Daniel Schneiders (GER): “I always perform better under pressure. In London Olympia I started off too quickly whereas today I was really able to focus. My tactics were to drive safely on the first night when I placed second. Today I decided to go for it in the winning round to see how fast my horses could go. If I’d had one knockdown, I would’ve slowed down, but it went so well that I just kept going. Qualifying for the Final in my first FEI World Cup Driving season is a dream come true.”

IJsbrand Chardon (NED): “I knew I was a few seconds ahead of Daniel Schneiders when I entered the winning round and I had to take some risks. After the second knockdown I knew I could not win but I decided to keep driving at high speed to see how my horses would go and they did a great job. I am very pleased with them. Hopefully my injured horse Fegyenc will be fit again for Bordeaux but I will keep training Feles just to be sure.”

Koos de Ronde (NED): “I had a slight miscommunication with my horses in the first round where I nearly took the wrong gate in an obstacle. If I had continued, it would have cost me 20 penalty seconds, so I quickly decided to put them back. This cost me around 10 seconds and a knockdown and I was lucky to make it to the winning round at all. I then knew third place was the highest place achievable for me this year in Leipzig, so I am pleased. I still have some homework to do before the Final in Bordeaux, but I know my horses have the speed we need.” 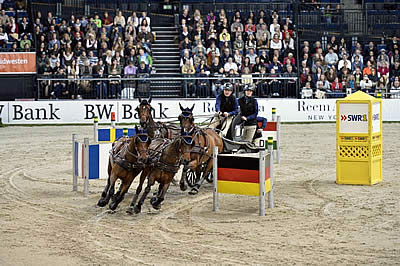 Germany’s Daniel Schneiders made the most of his first points-gaining FEI World Cup Driving start to win on home turf in Stuttgart. (Karl-Heinz Frieler/FEI)

Stuttgart was Daniel Schneiders’ first proper FEI World Cup start and he made the most of it by collecting maximum points. After he switched from driving ponies to horses two years ago, his goal was to compete in the FEI World Cup. He received a wild card in Hannover in 2012 and 2013 and qualified for the FEI World Cup Driving season 2013/2014 after his compatriot Christoph Sandmann and Chester Weber (USA) pulled out.

Thrilling to the end
Schneiders, a farrier by profession, had one knockdown in the first round but was very fast, to go through the winning round. Driving the same team of horses with which he was less successful in Hannover several weeks ago, Schneiders put down a very fast time again in the winning round, which took place over a shortened course. The difference between Schneiders and Von Stein was only a little over one second and when Von Stein knocked a ball and was one second slower, Schneiders moved up to second place.

Last man in and top favourite Boyd Exell started at full speed, using his new leader horse Knight Templar. In the first marathon obstacle, Knight became too strong, which cost a knockdown and precious seconds. An element also fell, blocking the way to the finish, which caused another ball to fall, much to the excitement of the spectators in Stuttgart, who then knew their home driver Schneiders would be declared the winner. With 10 points for victory, Schneiders has moved straight into equal third in the series standings.

Recovered
Jozsef Dobrovitz (HUN) drove a clear round, but wasn’t quite fast enough and had to settle for fourth, ahead of Michael Brauchle (GER), whose horses were clearly fully recovered from a tip-up the night before. The 23-year-old wild card driver from the Stuttgart area put down a steady performance around the course, designed by Stuttgart’s new course designer Dr Wolfgang Asendorf (GER). Jozsef Dobrovitz junior knocked one ball and became too eager after that, resulting in another two knockdowns for sixth place at the finish.

Schneiders used the big “ponies” Cabus and Costa in the lead. Cabus was previously part of Schneiders’ pony team, while Costa was used by his brother Dennis in single harness. Both horses are part of Schneiders’ outdoor team. Schneiders also uses the Dutch gelding Twister, formerly owned by Theo Timmerman (NED) and Boyd Exell, and the thoroughbred gelding Jumpingjackflash in the wheel of his team.

New Course designer
German O-course designer Dr Wolfgang Asendorf was making his Stuttgart course design debut, taking over the reins from Falk Böhnisch, who retired last year. Asendorf has been a course designer for over 20 years and has designed many World Championships, FEI World Cup, national and international events. Next year’s CAIO Aachen will see Asendorf in charge for the 13th time. After the first competition in Stuttgart, Asendorf decided to change gate A around in the second marathon obstacle to make the course more fluent, which was much appreciated by the six drivers.

Quotes:
Daniel Schneiders (GER): “My goal in the winning round was to drive just as good and fast as in my first round, but without knocking a ball down. It is just amazing that I won during my first start in Stuttgart. In Hannover I noticed that my horses were not fit enough, so I worked on that in the past weeks and this has paid off. They are super fit now. I just love the FEI World Cup Driving. If I could, I would do nothing else!”

Georg von Stein (GER): “I drove the same horses as in Hannover and in Verona and they are getting better every time. At first when I saw the course plan, I did not like it very much, but it turned out very well and we have seen good sport.”

Boyd Exell (AUS): Laughing: “I have to blame Michael Freund for my faults today! Michael always told me that if you can’t hold them, let them run. I did let them run, but I wasn’t able to take them back in time. My new leader horse Knight became too eager and we changed the bit settings after the first round to get more control. We came into the first obstacle too fast and Knight did not want to wait. It was a team mistake that we did not see the element that we knocked down, blocking our path, which forced a second ball to fall. This was avoidable, so I am a little disappointed with that.”