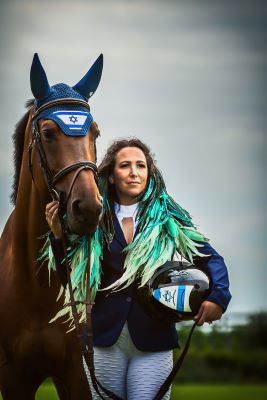 Waldman and her Olympic partner Queensland in an image that was used in multiple magazine covers.

Amsterdam, The Netherlands (October 26, 2021) – Ifat Zohar’s photography thrives at the intersection of fantasy, reminiscence, and passion; this summer that intersection was stunningly bisected by an Olympic equestrian and her journey to the upper echelons of the sport. Dani Waldman, formerly Goldstein, has been a longtime friend of Zohar; the pair met via their connections with the Israeli Equestrian Federation, and the merging of art, sport, and brilliance has yielded some breathtaking imagery. From Renaissance style equine portraits to scenes straight from a fantasy novel, Zohar and Waldman’s creative minds have combined to create some of the most striking portraits of an Olympian athlete.

Waldman has long been known on the equestrian and mainstream media circuits for both her skill in the saddle and her own trademark feathered mane. She and the 12-year-old gelding Queensland made their Olympic debut this summer in Tokyo, where she rode for Israel. Her sessions with Zohar were inspired by a parallel appreciation for animals (especially horses), fashion, and a flair for the scintillating. The resulting work has been dazzling, right down to her Olympic portraits for Team Israel.

“Ifat has the ability to capture a moment in time and turn an ordinary photograph into art,” said Waldman. “Her work is truly reminiscent of the great masters of painting! Branded imagery like Ifat’s is key to anyone’s public image — recognizability and consistency helps people identify you and creates a sense of unity for an athlete or artist. Ifat’s very unique and recognizable style sets her apart from typical photographers; she is able to capture that unique bond between animal and human by bringing out the emotions rather than just a pretty image.”

Of her many shoots with Zohar, Waldman struggles to pick a favorite image or moment: “There are so many to choose from, but I love the ‘La vie en Rose’ image perhaps the most.” Zohar’s work with Waldman has also been used in multiple publications across the United States and Europe, as well as in photography competitions. One image of Waldman with a white peacock was chosen to represent The Netherlands in a 2022 World Challenge Photography Competition by the Dutch national photographers association (DuPho), a major honor.

Known for her stunning work with both domestic and fantastic fauna, Zohar combines themes of old-world indulgence, elegant theatrics, and a closeness to nature to create her visual masterpieces. An award-winning photographer originally from Israel, Zohar’s work has been featured in numerous publications, including those for the biggest equestrian events of 2021, and stands out as a new breed of modern portraitist.

Zohar’s portrait studio work is inspired by the old masters’ love for storytelling, and their use of light and dark to add depth and dimension to their subjects. Ifat’s signature portraiture technique breathes art into her images of people and the animals they love. “I was looking for a better way to tell my clients’ stories with their pets, a more artistic way to timelessly capture their relationships,” said Zohar. “During my shoot, I am not just creating beautiful portraits but also capturing the unique connection, personality, character, and emotions of each animal and their humans.”

Originally from Israel, Zohar is now based full time in The Netherlands. Her creative portraits include Fine Art, human & animal themes, commissioned work, and character portraiture. The uniqueness of her work has earned her numerous accolades and exhibitions: 2 nominations in the international Fine Art Photography Awards (2021), Finalist in the 2020 “One Eye Photography Awards”, winner of the 2019 Benelux Photo Master award competition, and the 2019 Bronze Rise International Photography Award, to name a few.