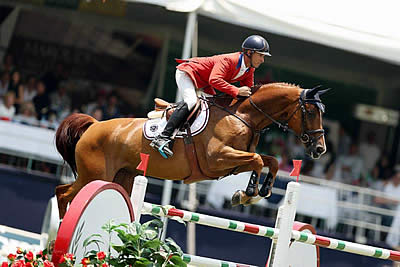 Xalapa, Veracruz – The Hermès U.S. Show Jumping Team consisting of Christine McCrea, Jonathan McCrea, Richard Spooner, and Ali Wolff nearly forced Mexico and Canada into a three-way jump-off at the Furusiyya FEI Nations Cup at CSIO4* Coapexpan. However, Mexico’s Jose Antonio Chedraui Eguia went double-clear to secure the victory for Mexico, resulting in a two-way tie for second between the U.S. and Canada. With 12 faults, the U.S. picked up 85 points in the North America, Central America & Caribbean region of the Furusiyya FEI Nations Cup™ Jumping Series. The U.S. heads to CSIO3* Langley, the last of the region’s Nations Cup Final qualifying competitions, in second place with 185 points behind Mexico at 190 points.

“All week we knew that this was going to be a tough competition. All three teams could have won at the end, and we were in position for a three-way tie. Richard did what he was supposed to do. His double-clear was perfect, especially with a relatively new ride. He needed to be clean. Chris’ second round was great and a nice improvement from the first round; she’s getting used to a new horse, too. Ali’s clean round was amazing and just a well-ridden ride. Jon was just a hair off clean in both rounds with the stallion. Obviously, we would have loved to have won; it’s disappointing not to when we were so close. It was a fantastic event. The footing was amazing and the facilities are as good as they get,” said U.S. Chef d’Equipe Robert Ridland.

Jonathan McCrea (East Windsor, Conn.) with Candy Tribble’s Aristoteles V took to the Guilherme Nogueira Jorge designed course first for the U.S. Team. He and the 2005 KWPN Stallion had a smooth performance until they knocked a rail at 11a, the first element of the triple combination. Last year’s CSIO4* Coapexpan Team Gold-medalist, Ali Wolff (New Albany, Ohio), followed with her and John Wolff’s Quirie 2. She and the 2007 German Warmblood gelding clipped a rail at obstacle nine for four faults.

Christine McCrea (East Windsor, Conn.) with Candy Tribble and Windsor Show Stables’ Dynamo, a 2003 Belgian Warmblood gelding, had trouble at fence seven, the triple combination, and the final oxer, for a total of 12 faults. Riding in the anchor position, Richard Spooner (Agua Dulce, Calif.) with Gerardo and Alfonso Pasquel’s Big Red mastered the course beautifully for a clear round. The U.S. ended the first round on eight faults, just behind Mexico and Canada, each with four faults.

In typical Nations Cup competition fashion, victory came down to the final round. Behind by four faults, the U.S. dug deep to remain in contention. Johnathan McCrea and Aristoteles V entered the ring first coming out of the break. They turned in a strong performance with a single rail down at fence six for a score of four faults. Wolff and Quirie 2 came through for the U.S. with an excellent clear round, and Christine McCrea and Dynamo made critical adjustments for a solid round despite a fault at the water. Tied with Canada on a best score of 12 faults, Spooner and Big Red needed a clear round. The pair remained focused to come through for the U.S with another clear round. Canada’s 2008 Olympic Gold medalist Eric Lamaze also earned a double-clear, which left the U.S. and Canada tied on 12 faults, only one rail behind Mexico going into the home team’s last ride. As the crowd held its breath, anticipating a three-way jump-off, Chedraui Eguia went clear to end the United States’ chance for victory.

“This was a super team. The first round was a little difficult for us. We pulled together for the second round. Our horses jumped fast, but Mexico just jumped better. I couldn’t be happier with Big Red’s double-clear. A horse doesn’t come along like that every day. His owners, the Pasquels, are part-Mexican. It’s nice having support from U.S. owners, but it is great that we can have support from other nations, too,” said Spooner.

All four U.S. riders will compete in the Grand Prix Veracruz on Sunday beginning at 1:00 p.m. ET. 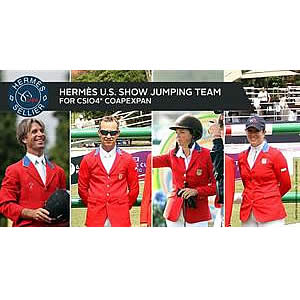 Lexington, Ky. – The United States Equestrian Federation (USEF) is pleased to announce the athlete-and-horse combinations who will represent the United States on the Hermès U.S. Show Jumping Team in Furusiyya FEI Nations Cup competition at CSIO4* Coapexpan, in Coapexpan, Mexico, April 28 through May 1, 2016.

The following athletes and horses will represent the United States (listed alphabetically):