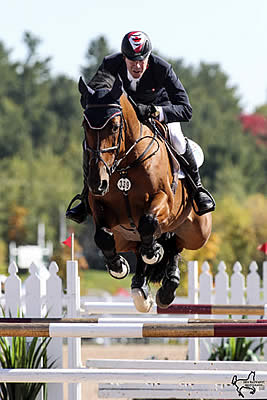 Hot off his win in the $1.5 million CP International on September 14 at Calgary’s Spruce Meadows ‘Masters’ tournament with Dixson, 67-year-old Millar once again stood in the winner’s circle following a masterful performance aboard Star Power. Owned by a group known as Team Works, the name could not be more fitting as two other members of ‘Team Millar’ joined the patriarch in the awards presentation. His son, Jonathon Millar, who had celebrated his 40th birthday one day earlier, placed second riding Calvin Klein while Jonathon Millar’s long-time girlfriend, Kelly Soleau, rounded out the top three.

In one of the largest starting fields ever seen in International Equestrian Federation (FEI) sanctioned competition in eastern Canada, a total of 50 horses were entered in Friday’s $35,000 CSI competition, which acted as Phase I of the RAM Equestrian Caledon Cup. On the day, 46 horses went through the start timers, where a clever track set by course designer Bernardo Cabral of Portugal yielded 16 clear rounds.

With the stage set for a dramatic jump-off, spectators were treated to another clear round by Millar, who was third to return in the jump-off order. Setting the pace with a time of 45.09 seconds, Millar put the pressure on those who followed. While five were able to better the time, including Millar himself with his second ride, Dixson, none were able to leave all the rails in place.

“It was a big group and, given the nature of the competition, it was a bit of a mixed group,” reflected Millar on the large starting field that included both Olympic veterans and young up-and-comers. “The course designer made it clear that it wouldn’t be the biggest course, but it would be technical and the time allowed would be a factor. He made the jump-off very difficult to jump clean. The minute you put the speed to it, you saw the rails come down.”

Of his own strategy with Star Power, as only the third pair to return for the jump-off, Millar said, “I figured it would get to be a fast class, but I sure wasn’t going to give it away! Star Power was right on the job.”

In the end, it was his own son who came a close second following a clear round in a time of 45.56 seconds with Calvin Klein, a 10-year-old Swedish Warmblood gelding (Cardento x Feliciano) owned by the family’s Millar Brooke Farm in Perth, ON.

“We bred that mare of Kelly’s, and Jonathon’s horse we bought several years ago in Holland and I had a hand in bringing him along, so to see it all coming to fruition is wonderful,” said Millar. “It is great to be out there with them, and just plain fun to do!”

While Dixson, owned by Susan and Ariel Grange, has been in the spotlight the past few weeks, first representing Canada at the 2014 Alltech FEI World Equestrian Games in Normandy, France, before scoring back-to-back victories in the $300,000 BMO Nations’ Cup and the $1.5 million CP International, presented by Rolex, at the Spruce Meadows ‘Masters’, it was Star Power’s turn to visit the winner’s circle at the Caledon Pan Am Equestrian Park. Millar has been partnered with the 13-year-old Dutch-bred gelding (Quick Star x Calvados) since 2010.

“It was a beautiful day, a lovely presentation, the footing is extraordinary, and the facility couldn’t be coming along better,” said Millar in praise of the Park, which has undergone extensive reconstruction in preparation to host next year’s Pan American Games. “It will be the best Pan Am facility that I’ve ever been to.”

Millar, who holds a world record with 10 Olympic appearances, has made it very clear that he has every intention of representing his country not only on home soil at next year’s Pan American Games, but also at the 2016 Olympic Games in Rio de Janeiro, Brazil.

Craig Collins, Managing Partner of competition organizer Equestrian Management Group (EMG) as well as Sport Organizing Chair – Equestrian for the 2015 Pan American Games, was both inspired and grateful for the large turn-out at this year’s Canadian Show Jumping Tournament.

“The riders are truly voting with their boots,” said Collins. “Everyone can talk and say nice things about the facility, but when I see 50 riders entering a class, it means a lot. Outside of Spruce Meadows, I don’t think there has ever been an FEI class that had 50 entered and 46 going to the post. That level of confidence and that level of support make what we’ve done over the past few years really worth it!”

The CSI2*-W Canadian Show Jumping Tournament marks the fifth and final week of FEI-sanctioned competition to be held at the Caledon Pan Am Equestrian Park in 2014. The Canadian Show Jumping Tournament concludes on Sunday, September 28, with the $50,000 RAM Equestrian Caledon Cup, Phase II, presented by Peel Maryborough and Aviva Insurance. The grand finale also acts as a qualifying event for the 2015 World Cup Final to be held in Las Vegas, USA.