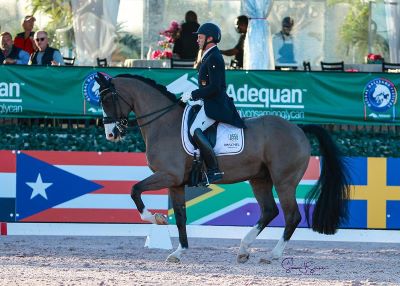 “He felt a bit spicy today,” began Koschel. “The horse is really expressive, but he can do better in the canter tour, so this is definitely something we want to improve. He has competed well lately, but the atmosphere is a little chilly tonight, and he knows this arena, but he was still a little nervous. For a start to this season, I was pretty happy with it.”

Koschel’s winter plan is to give the gelding more time in the competition arena before taking him back to Europe for the summer. “We want to get as much experience together as we can get,” he continued, “and I am looking forward to my first freestyle with him on Sunday. When he feels good, I want to keep competing and see where we end up. We can do better with more suppleness and less tension, but that will come.” 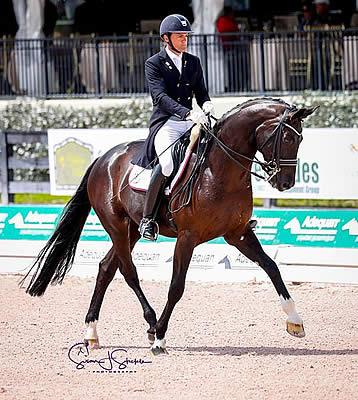 Wellington, FL – March 30, 2019 – The final week of the Adequan® Global Dressage Festival (AGDF) continued on Saturday, March 30, with the final for the inaugural Future Stars Performance Series presented by Iron Spring Farm. Christoph Koschel (GER) and Shakespeare emerged as the winners of the exciting new event.

Koschel and Shakespeare, a nine-year-old Mecklenburg gelding by Sancisco Old x Letizja owned by Carrie Schopf, scored 74.575% for the win, which garnered them $10,000 in prize money.

“I was really happy with my test today,” said Koschel. “I think he improved a lot since Thursday. He was much more comfortable in the main arena here, so I could show more of his potential, and I think that’s a very positive show for the future. I think his ability to collect is really a highlight, especially the pirouettes. Later on, the piaffe passage work will also be great.”

At the time, Koschel was the youngest rider to win the Nürnberger Burg Pokal in Germany (their popular Young Horse National Championship) in 1992, a competition that the Future Stars Performance Series is modeled after.

“I was always thinking, coming here [to AGDF], ‘That would be great to have [this class] here as well, because Americans they have such good young horses as well.’ Then there’s [a class] before the top sport or the grand prix sport,” Koschel explained. “It’s a real development class. When you have the whole season to prepare, it’s for sure a highlight to be in the main ring at the end. I think it was really well done, and I really enjoyed it.”

“This mare has a wonderful temperament, and she’s a worker bee,” Hickey said of his mount. “She loves the work. I think that for me, that’s a big highlight – that a horse is really rideable – and today my rein back, it was a weak spot in the test. I lost some of the changes in the warm-up momentarily and then they came back, so that was a good thing. That’s what happens with young horses, and we all understand that.”

Hickey added, “I would also like to say that it’s wonderful as an American, having shown in Europe some, it’s great to have a final like this and a class developed. I thank Ken [Braddick] and everyone at AGDF who came up with this in the first place.”

“My horse’s changes today were a highlight,” Davis said of her test. “They were big and expressive and ground-covering. I was able to show a little more power in today’s test.”

Davis mentioned that Damocles HLF is an American-bred horse from Highlife Farm in Florida. “It’s kind of full circle that we’re coming back to the final here, and he did so well. It was a great experience,” she said.

Thomas Baur, AGDF Director of Sport, announced that AGDF will introduce a Young Horse Grand Prix Series in 2020. He stated, “First, I would like to thank Ken Braddick for the idea and bringing it up to me. I was immediately on board because I know the German system, and we developed it together. We will look at the Series and how we can keep improving it.” 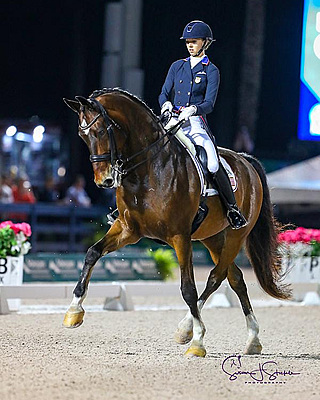 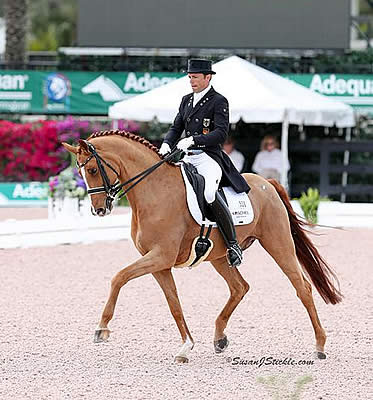