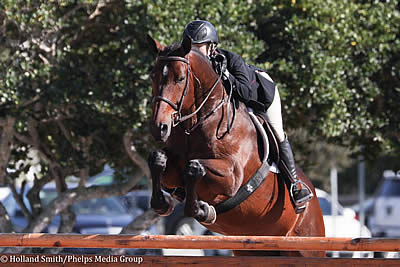 Delray Beach, Fla. – April 2, 2020 – Although the 2020 Winter Equestrian Festival (WEF) came to an early close, Carriage Hill Farms (CHF) is celebrating the success and continued growth of its students, horses, and staff over the 10 weeks of competition. Based in Delray Beach, Fla., the team at Carriage Hill Farms traveled 30 minutes north each week to partake in yet another year of one of the world’s premiere winter equestrian events, earning top ribbons and learning valuable lessons along the way.

“I am so proud of the whole Carriage Hill team for having a successful WEF 2020,” said Jane Fennessy, owner and head trainer of Carriage Hill Farms. “From our trainers and riders at home, to the staff we had at the horse show every day, everyone really stepped up their game and made this an exceptional season. Lessons were learned, levels were climbed, and most importantly, fun was had by all!”

Twenty of Carriage Hill Farms’ students took to the competition ring over the ten weeks, all producing great rounds in their respective divisions to progress their knowledge and experience while also achieving their goals. In total, the students of CHF claimed over 75 top-five finishes during WEF, in addition to multiple championships in divisions ranging from the Children’s Hunters to the High Amateur Owner Jumpers.

To highlight a few, Emmanuelle Greenberg piloted her horses Iomare De L’esku, Very Good de La Bonn, Tempo Royal, and Eilan Del Maset to many quick and clear rounds in the Medium Junior Jumpers, and she showed in the USEF Show Jumping Talent Search for the first time with Curacao. Annette Friend rode Casual Water in the USHJA National Hunter Derby, her first derby ever. Michelle Whitman and C’Van De Helle claimed a championship ribbon in the Adult Amateur Equitation. Erika Jakobson put in multiple double-clears for top-five finishes with USA Normande and Everton. Angela Calicchio and City Walk clinched first and second places in the Ariat National Adult Medal and Low Adult Amateur Jumpers. Riders Raine Whitman and Madison Staiano finished first and third in the SFHJA Junior Medal 14&Under and a number of other students also capped off their season with great results and even better lessons learned during their time in the ring.

“Our 2020 Season was really about growth and transitions,” shared CHF trainer Meredith Gallagher. “We had a few long-term students transitioning to college and the amateur ranks while the majority of our junior riders were moving up to new divisions and/or new horses. I believe each rider handled those transitions well and I was proud of the way they remained focused and competitive throughout all the changes that this season brought!”

CHF’s large selection of high-quality sales horses also shined bright over the course of the season. Czar Du Mesnil placed at the top of a variety of divisions, including the Low Adult Amateur Hunters, Green 3’6″ Hunters and the Adult Amateur Hunters where he was named reserve champion with Taylor St. Jacques in the irons. Rebel de Vizy continued his winning ways to place third and fourth in the High Performance Conformation Hunters with Gallagher during World Championship Hunter Rider week, and picking up the champion tricolor in the division during Week 4. Gallagher also rode Quinta, who is offered for lease, to a win in the very competitive 1.30m Jumpers. Clearano Z bested multiple fields in both the equitation and jumper rings, showing off his ability to excel at both disciplines with consistent top-three finishes. Uderzo de Rance and CHF trainer Hayley Iannotti proved to be unstoppable in the 1.30m Jumpers, crossing the finish line ahead of nearly 70 people a number of times.

Quite possibly some of the team’s favorite memories from the season, Carriage Hill Farms participated in two of the most exciting editions of “Saturday Night Lights”: the Battle of the Sexes and the Great Charity Challenge. In the Battle of the Sexes, Iannotti was a valued member of the girls’ team as she claimed two out of three of her points against the boys team. During Week 4, Golombek, Jakobson and Greenberg rode on a team in the Great Charity Challenge to raise over $30,000 for the Step by Step Foundation.

“Having the opportunity to start the season off competing in the Battle of the Sexes was something I’ve always dreamed of. The Battle of the Sexes is such a fun class and a great way to get everybody in the spirit for circuit! I rode my horse Uderzo de Rance and he was better than I could have ever expected. It was my first time out under the lights and I’m so grateful for the experience and the opportunity that team captain Nicole Bellissimo gave me and hope to do it again in the years to come!” expressed Iannotti. “Being able to raise money as a team for the Step by Step Foundation was so special. Carriage Hill and our students have been lucky enough to participate in this event a few times now and each year it just gets better.”

Carriage Hill Farms would like to thank its entire team for their support and hard work throughout the season, as their continued success would not be possible without them. The CHF horses have now returned to their home base in Delray Beach and are enjoying some time resting and regrouping. CHF’s staff will continue to care for its horses and assist riders in working towards their goals so that when the time comes to step back into the show ring, the Carriage Hill Farms team will be ready!