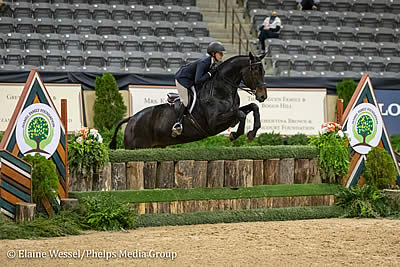 Lexington, KY – October 25, 2020 – The final day of the 2020 National Horse Show’s Opening Weekend continued to showcase equitation talent Sunday, with a substantial field of 174 junior contenders taking to the Alltech Arena to vie for the tricolor honors in the Hamel Foundation National Horse Show 3’3” Equitation Championship, the final contest of the weekend. Featuring the largest field of the weekend, the class celebrated its third year after a successful debut in 2018 and enhanced turnout in 2019. Thanks to three textbook rounds – twice over fences and once on the flat – Caroline Tinsley added her name to the list of winners of the prestigious class as the 2020 champion. The clear victor, Tinsley’s three rides aboard sister Abigail Tinsley’s Zonder Z Quattro were so exemplary that the judges panel did not feel the need to request a work-off due to the impression left by the leading pair, who never fell from the first spot following their first ride around the ring.

The 12-effort first round track, crafted by veteran designer Bobby Murphy, was fit for the occasion, offering exhibitors opportunities to shine while also serving as a useful tool to separate the top performers from the rest of the pack. In front of the judging panel of Keri Kampsen and Chance Arakelian, horse-and-rider combinations put their best foot forward, with 24 of them ultimately pegged to return for the flat phase of the contest as the highest point-earners thus far. Split into two sections, the qualified exhibitors displayed their prowess at all three gaits, plus the counter-canter, then advanced to the third phase of competition. Headed into the next portion of riding, Caroline Tinsley led the way, followed by Julia Nickl, Francesca Guidi, Jessica Carney, Christian Dominguez, and Taylor Cawley.

Returning to the ring for a second over fences trip, the list of remaining contenders once again aimed to impress the judges over Murphy’s newest track, which featured a fence jumped both directions as well as plenty of bending lines and changes of direction. The field rode in reverse order of the standings, giving Tinsley the advantage of riding last as the frontrunner. The top 24 duos aimed to inspire, collectively turning in a series of standout performances during what would turn out to be the final phase of the competition.

Though the judges had the opportunity to request further testing, Kampsen and Arakelian decided they had seen all they needed to determine the results of the top finalists. As the results were announced one by one, it became clear that Tinsley had succeeded at maintaining her grasp on the top spot on the leaderboard, a status she held ever since her first trip around the arena as the 97th in the starting list in the irons aboard Zonder Z Quattro. Making a jump from seventh place, Madison Olvert captured the reserve honors in her last-ever junior class on her own Green Book, a welcome addition to her division championship in the Pérez & Bennett 16-17 Equitation Over Fences earlier in the weekend. Nickl piloted her own Zurich to the final podium placing, and owner-rider Madison Sanders clinched fourth place with Calvandani Z, a substantial jump from 15th place after the under saddle phase.