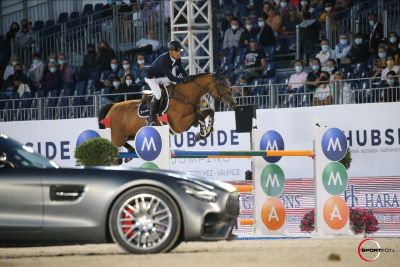 They were twenty-nine to take the start of Thursday’s major CSI 5 * event, rated at 1.50m. On a tour signed Cédric Longis, eleven riders managed the perfect course. However, it was necessary to act quickly and well to win. Successful bet for Haras des Grillons rider Carlos Enrique Lopez Lizarazo.

Jazzy music in the speakers, setting sun, and pink clouds relayed by diffused light all around the track, summer sweetness… the atmosphere was more than warm at the HUBSIDE JUMPING IN VALENCIA. However, in the arena, the riders were busy trying to overcome the difficulties proposed by the course manager, Cédric Longis. Combination number 9 will also have caused a hard time for many top players on the circuit, like the Frenchman Simon Delestre on Chesall Zimequest or the Italian Lorenzo de Luca and Amarit d’Amour.

It was the Brazilian Eduardo Pereira de Menezes, saddled on Calypso des Matis, who started the clear round and set the tone with a quick stopwatch of 63’36. Determined to do battle, the Amazons were not left out in this event, showing all their know-how. Sweden’s Angelica Augustsson Zanotelli on Ninterder Star (8th), the French Mégane Moissonnier with Aramusse (7th), Marie Pellegrin Boreal Rivendell (6th), or Mary Demonte Manchester (5th) attempted the catch, without success. It was not until the Briton Guy Williams, in the very last part of the race, to finally succeed in lowering the clock to 62’58 with Rouge de Ravel. This was what further motivated Haras des Grillons rider Carlos Enrique Lopez Lizarazo, who won at home in 60’45 on his superb Evita Sg Z.

There was great sport Friday on the track of the HUBSIDE JUMPING in VALENCE. Eighteen couples had won their entry ticket for the jump-off of the 155 cm CSI 5 * event, determined to win. Discreet but oh so effective, the Normand Marc Dilasser got everyone to agree.

The first competitor set off for the major event of the day, where the leaders of the discipline had met. First on the track, the Irishman Daniel Coyle gave the public a perfect first lap, opening up the possibilities with Legacy. In the process or almost, his compatriot Mark Mcauley followed suit on Cap West, confirming the holding of a dam, almost immediately imitated by Bertram Allen, in the saddle on Harley Vd Bisschop. But Ireland was not the only nation in great shape last night since in the end, eighteen couples from seven countries managed to thwart the pitfalls of the course designed by Cédric Longis. Who from Ireland, France, Great Britain, Colombia, Italy, Mexico, or Belgium would win? The battle promised to be raised.

Riders and riders therefore rolled up their sleeves to do it quickly and well, taking all the risks to try to lower the stopwatch of Mark Mcauley, the first rider to present a double clear round. Time to beat: 43’52. The French Olivier Perreau (5th) and Alexa Ferrer (4th), the Briton John Whitaker (3rd), the Colombian Carlos Lopez (2nd), and the Belgian Pieter Clemens (6th) succeeded, pushing each other’s elbows. But that was without counting on the ardor of Marc Dilasser and his fabulous Arioto du Gevres, who snatched the victory at the end of an intense test with a stopwatch of 39’10. Prodigious.