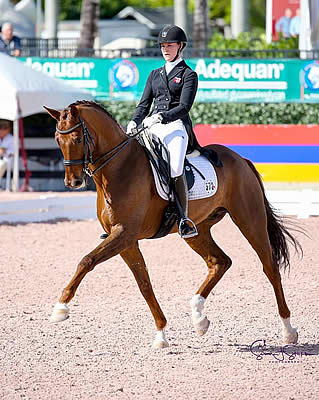 Wellington, FL – February 9, 2020 – It was a clean sweep at small tour for the 30-year-old Danish rider Carina Nevermann Torup, who teamed up with the eight-year-old Bordeaux gelding Bordolino 8 just a week before the show. They made it three plus-70% wins from three starts when topping the FEI Intermediate I Freestyle CDI3*, presented by Wellington Regional Medical Center, with 73.76%. Sunday’s action wrapped up competition in week five of the 2020 Adequan® Global Dressage Festival (AGDF) at the Palm Beach International Equestrian Center (PBIEC) in Wellington, Florida.

“I trained the owner, Dongseon Kim, a bit when he came over here, so I know the horse a bit from the ground, but I’d never sat on him before last Tuesday,” said Nevermann Torup, who is based in Denmark and works for Helgstrand Dressage. “It’s quite awesome that he actually won, but when you have a horse that’s well ridden, it’s quite easy to get on them. He’s an awesome horse and he gives such a nice feeling in the ring.”

This was the first time Nevermann Torup had ever ridden through this freestyle as she borrowed it from Kim.

“I just listened to the music yesterday and learned it,” said Nevermann Torup, who usually rides 8-10 horses a day and specializes in bringing advanced horses up to grand prix level. “Bordolino has so much power and I asked him for a little bit more today and he gave it to me which meant I had to make a little circle to get with the music because I ride him a little bit faster. We’re still getting to know each other so maybe in two weeks or a month it will be even better still; we’ll see.

“This show is really well organised and it was so cool to go in the ring here and to get a win on this side of the world,” she added. “Global [AGDF] is made for competition and everything has been thought about. The footing is great and everything just works.”

Bordolino may now be sold through Helgstrand, but Nevermann Torup is keen to keep training him up the levels. She brought her own horse over with her in December which she had planned to compete at AGDF, but he was quickly sold.

Lausanne (SUI), 24 JULY 2011 – German riders had it almost all their own way when claiming both the Young Rider and Junior team titles as well as three of the individual gold medals on offer at the FEI European Dressage Championships for Young Riders and Juniors 2011 at Broholm Castle in Denmark this weekend.  But the host nation did themselves proud when finishing a close second in both team events and then coming out on top in today’s Junior Freestyle Championship won by Nanna Skodborg Merrald and Millibar.

For Germany’s Sanneke Rothenberger these championships have been a particular triumph, as the 18 year old daughter of Olympians Sven and Gonnelien Rothenberger continues an ever-upward trajectory in her already impressive career.  She won team gold as a Pony rider, and in 2007 made history in the German Youth Riders Championship when clinching silver in both the Pony and Junior divisions.  She won team and individual gold at the FEI European Junior Championships in 2009 and last year claimed team gold and individual silver at Young Rider level.  This weekend, with her 10 year old Oldenburg gelding Deveraux which she has been competing for the last four years, she stepped up her game even further when taking Young Rider Team, Individual and Freestyle gold, firmly placing herself at the forefront of her sport and displaying an awesome talent in the making.

HRH Princess Benedikte of Denmark, the dedicated and active patroness of the Danish Equestrian Federation, attended the event and today the FEI President, HRH Princess Haya, was also at Broholm Castle to present the medals to the winning riders. It has been a testing few days in every respect, as the weather did all it could to disrupt this year’s fixture with pouring rain and high winds creating a less-than-perfect competition environment.  But the next generation of top-class dressage competitors rode through it with determination and emerged triumphant in the end.