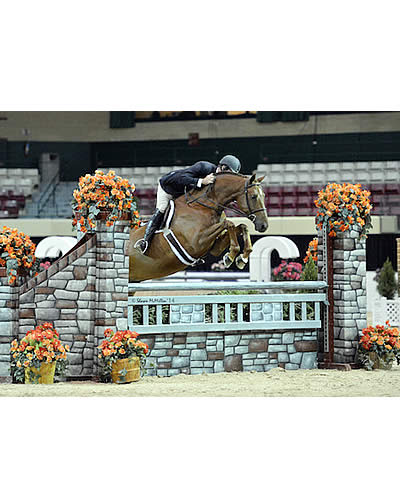 Another strong supporter of Capital Challenge is the Gochman Family who this year is sponsoring the $25,000 WCHR Professional Challenge. The WCHR Finals Series will also offer the Challenge classes for pony and children’s riders as well as adult amateurs, amateur owners, and juniors. New for this year is the WCHR 3’3” Junior Challenge sponsored by Canterbury Farm and the Durpetti Family.

CCHS starts out strong with the first weekend of the competition, showcasing the best equitation riders in the country as Equitation Weekend, presented by Bigeq.com, takes the national spotlight. Saturday, September 26th is dominated by a full schedule of divisions for all age groups, while Sunday, September 27th showcases three championship equitation classes.

Next in the lineup is the Taylor Harris Insurance Services (THIS) National Children’s Medal Finals, a class that CCHS will proudly host for its 21st year. CCHS will welcome forty of the country’s best child riders who have qualified throughout the year to compete for the national title.

“Hosting finals classes at Capital Challenge is an honor and something we will continue offering in the future as the show expands and grows,” said show manager Billy Glass. “The different finals classes provide riders of all ages an opportunity to perform on a national stage against riders from around the country, which is a very unique aspect of the show.”

The final class during Equitation Weekend at Capital Challenge will be the North American Adult Equitation Championships, giving adults the opportunity to compete over a challenging course.

“We feel privileged to host such a large number of finals classes during the week. There is always a sense of a championship atmosphere surrounding the venue during Capital Challenge, which always brings out everyone’s best,” said Oliver Kennedy, who serves as a show manager beside Billy Glass. “The sponsors of these classes help to bring notoriety and attention to the show and we are thankful for their continued support.”

The ARIAT National Adult Medal Finals presented by Ariat International will also highlight equitation talent, as top adult riders take to the Show Place Arena in this prestigious national final on Friday, October 2. Thirty competitors who have accumulated points throughout the season will ride a first-round course in an effort to qualify for the second round of competition where a national champion will be named.

Capital Challenge will open with equitation classes on Saturday, September 26, and continue with hunter and jumper classes, including the highly anticipated WCHR Finals Series throughout the week. Competition will conclude on Sunday, October 4.

A complete time schedule for the 2015 competition and the 2015 Capital Challenge Horse Show Prize List are available online at www.capitalchallenge.org.

Buffalo, NY – October 10, 2011 – SBS Farms returned home yesterday from the prestigious Capital Challenge Horse Show held in Marlboro, MD. The event has seen some of the most respected riders of the industry showing for the top honors in the competitive hunter divisions. SBS Farms’ professional rider and trainer Jennifer Alfano and Jersey Boy captured the judges’ attention in the High Performance Hunter division earning the reserve tricolor.

The nine-year-old Hanoverian gelding has built an extensive hunter record during his time with Alfano, winning events such as the $25,000 USHJA International Hunter Derby at the Devon Horse Show for two consecutive years. The talented duo claimed third place in their first three High Performance Hunter classes at Capital Challenge, as well as the first place prize in the High Performance Handy Hunter Stake. Their top awards earned the pair the reserve championship just behind Hunt Tosh and Rosalynn.

“I was really happy with our rounds at the Capital Challenge,” explained Alfano. “Jersey Boy and I have a great relationship, and we know what to expect from one another when we are out there. He was really good, a little spooky during the first class, which he can be; however, he stayed really consistent earning third in every class, and then won the handy. He was amazing in the handy, I was really happy with him.”

END_OF_DOCUMENT_TOKEN_TO_BE_REPLACED

The remaining highlight class of the week for the professional hunter riders is the $7,500 WCHR Professional Finals, presented by the John R. Ingram Fund, for the top six hunter riders in the country on Friday, October 7. The Capital Challenge Horse Show, held at the Prince George’s Equestrian Center, will run through Sunday, October 9.

Johnson Merton and Kingston were champions in the Amateur-Owner 18-35 Hunters sponsored by The Hallman Family and MerryLegs South. They won two over fences classes and were fifth in another, and they added a fifth in the under saddle class for the top tricolor. The reserve champion was Thoughtful, ridden and owned by Keri Guanciale. They placed second and fourth over fences and won the under saddle class.

END_OF_DOCUMENT_TOKEN_TO_BE_REPLACED

Upper Marlboro, MD – October 4, 2011 – Eight championships were awarded today at the Capital Challenge Horse Show, honoring the best hunters in the country. Sandy Ferrell piloted Showman, owned by Krista and Alexa Weisman, to the championship in the $9,000 Second Year Green Working Hunters. In the $10,000 High Performance Hunters, Hunt Tosh and Dr. Betsee Parker’s Rosalynn earned the top tricolor. Along with those two rated divisions, championships were given in five Future Hunter divisions and the Performance Hunters 3’6”. The Capital Challenge Horse Show, held at the Prince George’s Equestrian Center in Upper Marlboro, MD, runs through Sunday, October 9.

This week, Ferrell and Showman, a nine-year-old Westphalian gelding by Showstar, won three out of the four over fences classes and were third in the under saddle. The reserve championship went to Taken, ridden by Kelley Farmer for Nancy Amling. They were second in the handy hunter and third, third, and fourth in the other jumping classes.

END_OF_DOCUMENT_TOKEN_TO_BE_REPLACED

Upper Marlboro, MD – September 28, 2011 – The 2011 Capital Challenge Horse Show kicks off this Saturday, October 1, 2011, with its North American Equitation Championship Weekend presented by BigEq.com. Running through October 9, the 2011 Capital Challenge Horse Show will feature many of the nation’s best horses and riders in a week of exceptional equestrian competition held at Prince George’s Equestrian Center in Upper Marlboro, MD. The equitation weekend will host many exciting classes, including the finals for the 2011 Taylor Harris Insurance Services (THIS) National Children’s Medal series.

Kennedy stated, “Capital Challenge is a great opportunity for riders to show their horses in a fun and welcoming environment. The facility provides the experience of showing both indoors and outdoors, and there is always plenty of space to ride and school. We strive to give horses and riders the best experience available, and there is nothing better than showing at Capital Challenge in the fall.”

END_OF_DOCUMENT_TOKEN_TO_BE_REPLACED

Upper Marlboro, MD – September 23, 2011 – Capital Challenge Horse Show is proud to announce the launch of its first annual Virtual Horse Show and Fair.  In partnership with Virtual Celebration and sponsored by Hoof Beat Media, the virtual experience will begin on September 23, 2011, and all horse lovers are invited to participate.

“As part of our overall mission to engage our loyal exhibitors and followers, we are extremely excited to extend the Capital Challenge experience in a highly innovative way to those who can attend the show in person and to those who follow us from a distance,” explained Oliver Kennedy (Co-Manager).  “Virtual Celebration has brought together their incredible knowledge of social media with their experience in the horse market to create a really fun and unique experience.”

From the early development of their website and the creation of the Daily Update, to their Facebook page and the popular EquestrianSport.TV, show management has always strived to be the best at bringing the experience of Capital Challenge to everyone. It is only natural the Capital Challenge extends its reach into the virtual world.

Register online (it’s free!) at www.virtualcelebration.com/capitalchallenge and enter the virtual show rings to be a part of the action.  In the Jumper Ring, try to guess what pony went to the Olympics; enter the “caption this photo” contest in the Equitation Ring; and in the Hunter Derby Ring watch a video of the world’s largest horse.  And there’s so much more – Share-A-Pony with other virtual exhibitors, create your own Exhibitor page by adding games, photos, videos, and other widgets, all for free.  Share your favorite memories; predict who will win classes at the “live” horse show; vote on your favorite funniest photo and give your opinions on everything from twitter to riding in the rain.  There will even be a virtual trail ride that meanders through Facebook, Twitter, MustPhoto, Virtual Celebration and more, all while on a Capital Challenge Scavenger Hunt.

END_OF_DOCUMENT_TOKEN_TO_BE_REPLACED

Creating the original watercolor for the annual Capital Challenge is always a challenge for Father Michael Tang.  One might think that creating a photo-realist image of a horse and rider is as simple as copying a photo, but in reality, the photo is only the beginning.

This year’s poster of Scott Stewart and Declaration gave Tang many things to consider. It is natural to assume that a stunning photo of a fabulous hunter could easily be recreated as a painting, but the fact is that in addition to assessing the horse and rider, Tang becomes instantly aware of everything else that goes into creating a spectacular piece of art: lighting, background, and the simple details that render emotion.

When Tang begins his work he studies the photo for what he will need to alter in order to create the painting.  First, changes often need to be made to finesse a horse’s jumping style; knees might need to be made tighter or squared up. Next, the rider’s equitation might need to be tweaked or garb replaced.  Tang explains, “As someone who is a traditionalist (I still wear my Charles Owen when hacking at the barn), I always replace the helmet with a classically styled hunt cap.”

In addition to the rider’s gear, the horse’s tack might need some work as well; for example, an elastic girth with fleece might need to be changed to one of proper leather.

END_OF_DOCUMENT_TOKEN_TO_BE_REPLACED

Upper Marlboro, MD – August 25, 2010 – The Capital Challenge Horse Show will once again welcome the top 40 qualified riders for the 2010 Taylor Harris Insurance Services (THIS) National Children’s Medal Finals. The THIS Finals will be part of the Capital Challenge Equitation Weekend, presented by Bigeq.com, held on October 2-3, at the Prince George’s Equestrian Center in Upper Marlboro, MD. The horse show will continue on October 4-10 with competition in the outdoor ring and indoors in the Show Place Arena.

The THIS National Children’s Medal Series is the perfect stepping stone for young riders and offer a great opportunity to compete in an indoor arena with the pressure of a finals competition. Riders must compete throughout the year to qualify for the Finals, which is a great goal for aspiring equitation riders.

The Finals themselves also provide riders a chance to learn with an opening round and a test for the top riders in the class. The National Children’s Medal is a proven leg-up for riders planning to advance to the 3’6” equitation division. Many of the riders who placed well in the Finals in past years have gone on to win numerous equitation finals.

END_OF_DOCUMENT_TOKEN_TO_BE_REPLACED

Upper Marlboro, MD – July 7, 2010 – The Capital Challenge Horse Show, now in its 17th year of competition, strives every year to provide the best possible horse show for its exhibitors. This includes adding new classes that offer special opportunities for every level of rider. This year’s show will once again start with the Capital Challenge Equitation Weekend, presented by Bigeq.com, on October 2-3, and the horse show will continue on October 4-10.