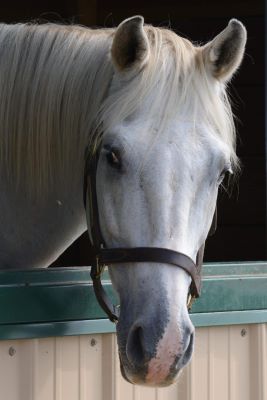 GEORGETOWN, KY – JANUARY 28, 2022 — Multiple graded stakes winner and 1996 Breeders’ Cup Classic Champion Alphabet Soup was euthanized January 28 at Old Friends Thoroughbred Retirement farm in Georgetown, KY, where he has been pensioned since 2015. The cause of death was chronic kidney disease.

At 31, the gray son of Cozzene was the oldest living winner of the Breeders’ Cup Classic.

Bred in Pennsylvania out of the Arts and Letters mare Illiterate, Alphabet Soup was a late bloomer for owner Georgia B. Ridder, winning his first stakes at age four when he captured the 1995 Native Diver (GR3) and the Del Mar Breeders’ Cup Handicap (GR2).

In 1996 he was the victor in the San Antonia Handicap (GR2), the Pat O’Brian Handicap (GR3), and the San Pasqual Handicap (GR2) en route to his greatest triumph, the 1996 Breeders’ Cup Classic (GR1), where he defeated the “invincible” Cigar as well as that year’s Preakness Stakes winner Louis Quatorze — all while setting a new track record at Woodbine.

Retired in 1998 to Adena Springs having captured 10 of 24 starts and earnings of over $2.9 million, Alphabet Soup sired numerous stakes winners, among them Grade 1 winners Egg Drop and Alphabet Kisses, and champions Our New Recruit, Phantom Light, and Sovereign Award winner Alpha Bettor.

“I’m saddened by the news today of Alphabet Soup’s passing,” said Hall of Fame jockey Chris McCarron, who piloted Soup to his Breeders’ Cup win. “I truly enjoyed my relationship with Soupy, and he will always have special place in my heart. He represented the U.S. well when he bested the Cigar and Louis Quatorze in the Breeders’ Cup Classic. Rest in peace old friend.”

“It won’t be the same around here without Soup,” said Old Friends President and founder Michael Blowen. “Over these seven years he was a delight to be around with his sweet nature and enormous popularity. He brought joy to everyone.

“His best friend, the donkey Gorgeous George, will miss him terribly,” added Blowen, “and so will everyone on the farm. We are so grateful to Frank Stronach and everyone at Adena Springs for giving us the privilege of retiring this fabulous champion.” 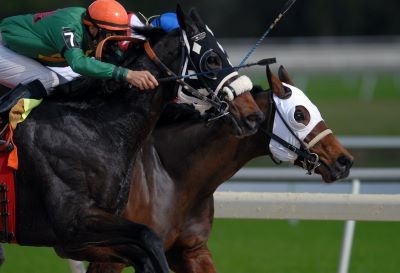