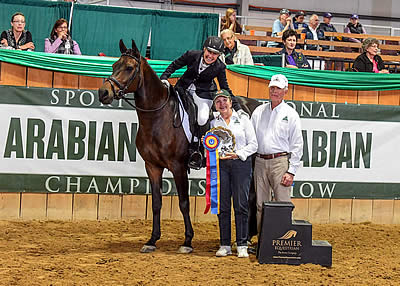 Nampa, ID (October 20, 2016) – Premier Equestrian, a leading supplier of high-grade footing, striking dressage arenas, and revolutionized horse jumps, recently recognized Beth Noteman for her exemplary horsemanship by presenting her with the Premier Equestrian Award at the 2016 Sport Horse National Arabian & Half-Arabian Championship Horse Show held in Nampa, Idaho. Premier Equestrian presents the award at shows across the United States to honor talented equestrians who demonstrate stellar horsemanship and sportsmanship, and promote positivity in and outside of the show ring.

Noteman stood out to the show committee as a well-rounded equestrian whose attention to the sport goes beyond her scores in the show ring. A talented rider and handler who has achieved remarkable success with her Arabians, particularly her renowned stallion HSA Haleys Comet++++//, Noteman has said that she is most proud of the fact that her horses lead happy and healthy lives. She strives to make every show a positive experience for her equine partners, and her close connection with her horses is anchored in genuine enjoyment of their company and a deep respect for their individual temperaments and capabilities. In addition to the sheer amount of patience and hard work that she has put in over the years, the show committee was impressed with Noteman’s flexible attitude in understanding and working with the core personality of each of her mounts.

Noteman, who believes that adaptability and a down-to-earth attitude is essential to achieving success as an equestrian, learned the importance of recognizing a horse’s potential when she purchased Arabian stallion HSA Haleys Comet++++// (Skamper x Ok Ellazella G) as a green four-year-old in 1999. “Comet” did not fit her vision of an ideal dressage mount, but Noteman was willing to compromise based on the recommendations of her trainers – and despite the unlikely pairing between an amateur rider and a green stallion, Comet turned out to be the horse of a lifetime. While working 12-hour days in order to fund her riding as an amateur, Noteman brought Comet up the ranks to win the most National Championships of any purebred Arabian Stallion in history. Her tenacity is an inspiration to amateur equestrians, proving that with a little luck and a lot of hard work, all riders can achieve the dream of Arabian horse ownership. Over the past few years, Noteman has expanded her horse family by purchasing Comet’s son, Comets Midnite Bandit (known as “Bandit”) and Bandit’s mother, Midnites Magic Genie (known as “Magic”). She competed on this Half-Arabian, Half-Friesian mother-and-son duo at the recent 2016 AHA Sport Horse National Championships, riding Bandit in First and Second Level dressage and Magic in Fourth Level and Prix St. Georges dressage.

Premier Equestrian is proud to reward talented riders like Noteman, who bring a positive attitude to equestrian sports and demonstrate true enjoyment of their horses both inside and outside of the show ring. The company offers an affordable choice for first-rate American-made products that enhance the equestrian performance of its customers. For more information about Premier Equestrian and its full line of products including footing, dressage arenas, and horse jumps, visit www.PremierEquestrian.com or call 1-800-611-6109.