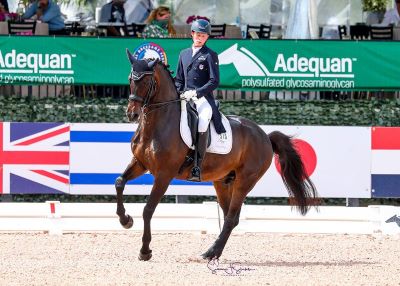 “It’s really a testament to my coaches and the team behind me,” expressed Ebeling. “For me, it’s really important to give thanks to them. They help me so much day to day, and I wouldn’t be here without them.”

The high score was also a personal best for Ebeling and the gelding, their second of the week after placing first in Friday’s FEI Grand Prix CDI3* with a 73.326%. “Today was the most comfortable that Illuster has felt in that arena,” said Ebeling. “Of course, it’s a big atmosphere for any horse, but he’s naturally a hot horse. The arena can be a bit of a challenge for him. Every time we go in there he’s settling down and for me mentally, that’s a big win.”

He continued, “Today his strength was definitely in the canter work. The first trot half-pass I was very happy with, and that last centerline is always so fun to ride too.”

The pair made their senior international Grand Prix debut at AGDF this season after competing in the Under 25 division and have notched several top placings since, with the day’s Special marking their third big tour win.

Ebeling explained, “Usually I’m talking to Robert Dover the night before a test, and one thing that he’s always telling me is maintaining a good connection with power and collection. It’s something that we talk about often, and I really feel like I brought that into the arena today.” 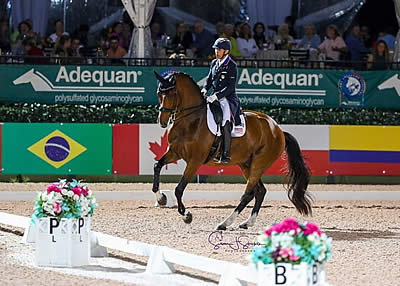 Wellington, FL – March 13, 2020 – Steffen Peters (USA) conjured yet another winning performance from his blossoming partner, Suppenkasper, to claim the gold in the Nations Cup™ FEI Grand Prix Freestyle CDIO3*, presented by Stillpoint Farm. This takes his tally of wins to 11 from 11 starts in the 2020 Adequan® Global Dressage Festival (AGDF), held at Palm Beach International Equestrian Center (PBIEC). The pair scored 81.535%, their second plus-80% freestyle score of the year. The 10th week of AGDF continues through Sunday, March 15, which is also the conclusion of the 2020 season, a decision announced earlier today due to the Coronavirus.

Right behind Peters, personal bests abounded on the podium. The Dominican Republic’s Yvonne Losos de Muñiz smashed her previous best by 2% to land an emphatic 78.91% and the silver medal on her 15-year-old mare Aquamarijn, by United. Brittany Fraser-Beaulieu (CAN) also pulled off a career high, riding All In, a 15-year-old gelding by Tango to 78.72% and the bronze.

In the under-25 Nations Cup division, Benjamin Ebeling (USA) fist-pumped the air at the final halt of the FEI Grand Prix Freestyle CDIOU25, presented by Diamante Farms.

He was right to celebrate: his energetic ride on Illuster Van De Kampert, which he’d finished with a piaffe fan in both directions, was rewarded with 75.13%. It was their best ever score at the level and earned the gold medal — their third of the week. 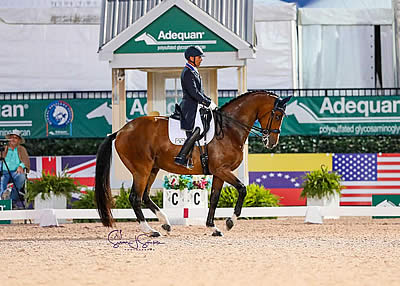