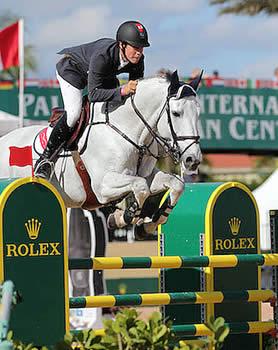 Calgary, AB, Canada – February 27, 2015 – Show jumper Ben Asselin, of Calgary, Alberta, Canada, is enjoying his winter in the sun competing at the 2015 Winter Equestrian Festival (WEF) in Wellington, FL. The 20-year-old rider trains and competes alongside his father, two-time Olympic veteran Jonathan Asselin, out of their family’s Attaché Stables. With a home base in Calgary, the young rider enjoys the opportunity to compete his top horses as well as develop some up-and-coming mounts while wintering at the Palm Beach International Equestrian Center.

As the 12-week WEF circuit continues in its eighth week of competition, Asselin recapped a great start to the season. The rising show jumping star had his top horse Makavoy, an 11-year-old Dutch Warmblood gelding (Hors la Loi II x Ahorn) owned by Attaché Stables, out and in top form to start the season. The pair was clear and fast to finish seventh in the very competitive WEF Challenge Cup during week six, but the gelding unfortunately experienced a setback in week seven.

“My horses have started the year off in form. They all feel very fit, and we are just getting back into the regime of competition,” Asselin stated. “They had a nice break in the fall and are all quite fresh. My best horse, Makavoy, very unfortunately sustained an injury this past week competing in the Grand Prix qualifier and will not be able to compete for the remainder of the WEF season. This is a big loss to our team, but we are all optimistic that we will make a full recovery and be back to competition after some rest and rehab.

In the meantime, Asselin has several other talented young horses that are coming up the ranks and competing well this winter. Amour 44 is a 10-year-old Dutch Warmblood mare (Numero Uno x Notaris) owned by Attaché Stables that began the circuit well. Asselin and Amour placed fifth in the 1.35m jump-off in week three and were eighth in the same class in week four.

“I have a couple new horses from Europe that I am getting to know here in Florida. Carmen is a nine-year-old mare with a promising future, and Amour is a ten-year-old mare that seems to be very competitive,” Asselin noted. “We also have many young horses that we are developing here at WEF to be prepared for the summer circuit at Spruce Meadows.”

Canadian rider Jenna Thompson is also riding for Attaché Stables this year and has had great results showing the stable’s six-year-old young jumpers, Clockwise and Lookout. Clockwise is an Oldenburg gelding by Contendro. Lookout is a Hanoverian gelding by Le Primeur.

Thompson and Clockwise began the circuit with a second place finish in the Six-Year-Old Young Jumpers in week two and also earned a fifth place in the division’s classic in week seven.

“Jenna is doing a great job helping to bring along our young horses,” Asselin expressed. “She is a very talented rider and a hard worker. She has also had some great rounds in the FEI division on Anaconda, an eight-year-old mare.”

As the winter circuit and the 2015 season carry on, Asselin and Attaché Stables have high hopes for continued success. Asselin hopes to move Doremi up to some grand prix classes by the end of the circuit. He also a looks forward to seeing the development of the young horses throughout the year.

“The goals for the remainder of the season are to continue to develop our young horses and get them some experience,” Asselin said. “We have a great group of horses, and we are all excited about what the future holds for us!”

Asselin and Attaché Stables will continue to compete at the Winter Equestrian Festival through March 29. 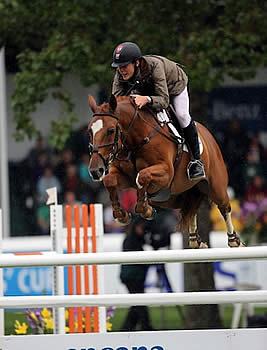 Calgary, AB, Canada – September 6, 2013 – Speed and power described the two competitions on the schedule today at the Spruce Meadows ‘Masters’. Opening up the evening was the $205,000 Encana Cup 1.60m, and the fastest in the jump-off was Calgary’s own Ben Asselin on Makavoy. The $75,000 ATCO Electric Six Bar featured four rounds of thrilling jumping as Martin Fuchs (SUI) cleared 1.95m for victory on Conte Della Caccia. The Spruce Meadows ‘Masters’ Tournament hosts the best show jumpers in the world through Sunday, September 8. The highlight events of the week are the $350,000 BMO Nations’ Cup on Saturday and the $1 Million CN International, part of the Rolex Grand Slam of Show Jumping, on Sunday.

There were 23 entries in the $205,000 Encana Cup, but only three were able to advance to the jump-off in driving rain. First to return was Christian Ahlmann (GER) on Taloubet Z. They had a rail at fence 15, an oxer off a right-hand rollback, for four faults and finished with a time of 46.73 seconds. Francois Mathy (BEL) and Espadon van de Kranenburg also had four faults, but with a slower time of 55.08 seconds.

Last in, Asselin and Makavoy were efficient through the turns and as they cleared the final oxer, the crowd burst into cheers when the scoreboard flashed #1. They posted a time of 53.94 seconds for the win. “We originally had [planned] a pretty fast track to try to have a clear round, but when I walked up everyone told me that both riders had four faults. I took a bit of a risk going so slow in the jump-off because if I had a rail down, I probably would have been third, but Makavoy was just unbelievable. He didn’t want to touch any rails,” Asselin explained.

Staying cool as the last in the ring was something Asselin had to accomplish. “I really had to work on keeping myself cool around the entire track. Even coming down to number one, my heart was racing. Coming down to the last fence I really had to stay cool. When I landed from that last fence all those emotions just let go,” he revealed.

He said of his partner Makavoy, a 10-year-old Dutch Warmblood gelding by Hors La Loi II x Ahorn, “He’s quite a little horse, but he has a huge heart. He has a ton of power and has a lot of motor. He’s quite sensitive to ride. He gives you a lot of confidence on that size track. He really takes you down to the jumps and always wants to get to the other side of the jumps. It’s a really fun horse to ride. He’s really quick and he has his own style over the top of the jumps, but he gets himself over them.”

Asselin is just 19 years old, and this was his first win in the International Ring. “It’s surreal,” he said with a huge grin. “I’ve been dreaming about winning in the International Ring forever, let alone in the ‘Masters’ Tournament. The caliber of horses and riders is spectacular all week. I really came into this division as a true rookie. I haven’t done that many tracks this height. I had no plan on winning anything. I have an incredible horse and he showed me he could do it.”

As the only rider to clear 1.95m, 21-year-old Martin Fuchs of Switzerland took the victory in the $75,000 ATCO Electric Six Bar competition with Conte Della Caccia. It was his second Six Bar win in 2013; he has shown three horses in four Six Bar competitions this year. “It’s cool; I like it a lot,” he smiled.

Joining Fuchs in the fourth and final round, but unable to clear the fences remaining, were Eugenie Angot (FRA) and Pirate Adalou, Lars Nieberg (GER) and Galippo 5, and Shane Breen (IRL) with Touch of Chilli. They tied for second place.

Fuchs has ridden Conte Della Caccia, a 10-year-old Holsteiner stallion by Canturo x Corrado I, for a year and a half, and they have moved up to the 1.60m level. Fuchs will compete for Switzerland in tomorrow’s BMO Nations’ Cup and Sunday’s $1 Million CN International.

He noted, “I took him here to Spruce Meadows to do his first five-star Nations’ Cup and grand prix. I think he’s my future horse. He’s not so experienced yet, but I hope to be good tomorrow.”

Fuchs felt that tonight’s Six Bar was great preparation for the weekend. “I knew after the first round that he was in top form and he likes it. With the crowd that really supported me and him, it really helped and he wanted to go bigger and bigger,” he said. “It was a good exercise for him. He’s a really strong horse and he wants to go to the jump. Here he started waiting and in the last round I could give some pressure for the last jump, which I usually cannot do. I think it’s good for tomorrow; he’s waiting and he did some gymnastics today!”

While Fuchs had a fantastic third place finish in the International two years ago, but this was his first win and experience in a winner’s presentation at Spruce Meadows. He said, “I’m really happy and proud. The people stay for the prize giving and stay to watch you. In Europe, in the prize giving you’re alone and you’re looking for the people and nobody’s there to cheer for you. It’s really special for us to come here and to do an extra round and they keep screaming and clapping. It’s really something special.”

The Spruce Meadows ‘Masters’ continues tomorrow with the $125,000 Suncor Winning Round 1.50m and the $350,000 BMO Nations’ Cup. For full results and more information, please visit www.sprucemeadows.com.