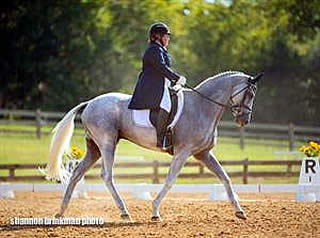 Tyler, Texas – The 2014 USEF National Open Horse Trial Championship got underway Thursday afternoon at the Texas Rose Horse Park with 12 horse-and-rider combinations performing their dressage tests. Becky Holder and her veteran, Can’t Fire Me, seized the early lead with a near flawless performance in the championship being held in conjunction with the Adequan USEA Gold Cup Series Final at the Nutrena USEA American Eventing Championships presented by VTO Saddlery.

Holder (Palmetto, Ga.) has claimed the Open Horse National Title twice before and looks to add her name to the Jack Le Goff Trophy for a third time this weekend. The 2008 Olympic Games and 2010 Alltech FEI World Equestrian Games veteran has put herself in a good position to do just that after riding Phil and Melissa Town and Tom Holder’s 15-year-old Thoroughbred gelding, Can’t Fire Me, into lead on a score of 31.2.

Holder was pleased with Can’t Fire Me throughout the test and felt that, with the exception of a mistake in the medium trot, they earned all the marks they set out to get.

“It certainly was the test we’ve been schooling and training for. It has a lot of walk work and turn on the haunches but he was great; he had two really clear walk pirouettes and two clean changes with just one bobble in the medium trot,” said Holder. “He was right on the mark throughout and really let me ride him through the corners, and we didn’t leave too many points on the table.”

Laying less than a point behind Holder in second place are Mathew Brown (Sebastopol, Calif.) and Blossom Creek Foundation’s eight-year-old Irish Sport Horse gelding, Super Socks BCF. The Event at Rebecca Farm CIC3* winners stand well within touch of the lead on a score of 32.5.

Reigning champions Lainey Ashker (Richmond, Va.) and her own 15-year-old Thoroughbred gelding, Anthony Patch, head out onto the cross country in third place with a score of 33.4.

Fairburn, GA – The Merial Advanced division at the Nutrena USEA American Eventing Championships presented by Bit of Britain wrapped up today with the show jumping phase at Chattahoochee Hills. Mark Donovan’s tough course had riders incurring numerous jump and time penalties with just five double clear rounds in the division. Becky Holder (Palmetto, GA) and Courageous Comet had one rail down but held onto their lead to win the Merial Advanced division held in conjunction with the USEF National Advanced Horse Trials Championship with a score of 27.7. Holder had a stellar weekend with her and husband Tom Holder’s 16-year-old Thoroughbred gelding, taking top honors at this year’s Championship as they did in 2010 Land Rover USEA American Eventing Championships.

It was a fitting way to end Courageous Comet’s illustrious career as Holder confirmed this was his last upper-level competition. The crowd went wild as Holder and “Comet” crossed the finish line winning the Championship and bringing a very special partnership to a close.

“He (Comet) deserves this. I believe now and have believed for a long time he is the best in his sport,” Holder said. “I appreciate the grooms, vets, trainers, selectors, USEF High Performance Committee, and everyone who has been part of shaping his career. Thanks to all the fans and to those at the Kentucky Horse Park; many of our most memorable moments were on that course and in that stadium.”

END_OF_DOCUMENT_TOKEN_TO_BE_REPLACED

Fairburn, GA – The cross country portion of the Nutrena USEA American Eventing Championships presented by Bit of Britain (AEC) took place today for the Merial Advanced division at the lovely facility of Chattahoochee Hills. Making the time on cross country proved to be a challenge on this hot and humid day as almost the entire field incurred time penalties except for two riders. Becky Holder (Palmetto, GA) was one of those riders, piloting Courageous Comet to a double clear round and keeping a firm hold on their first place position in the USEF National Advanced Horse Trials Championship. She confidently rode “Comet,” her & husband Tom Holder’s 16-year-old Thoroughbred gelding, around Hugh Lochore’s championship course, increasing her lead on the rest of the field to 8.7 points.

Laine Ashker (Richmond, VA) rode Anthony Patch, her 13-year-old Thoroughbred gelding, to the only other double clear round of the day moving up from eighth to second place. In the pair’s last start, they finished second in the Advanced division at Millbrook.

END_OF_DOCUMENT_TOKEN_TO_BE_REPLACED

Fairburn, GA – Competition at the Nutrena USEA American Eventing Championships presented by Bit of Britain (AEC) got underway today. With the Advanced division at the AEC also playing host to the USEF National Advanced Horse Trials Championship, stakes were running high. Becky Holder (Palmetto, GA) and her longtime partner Courageous Comet lead the field after scoring an impressive 23.7 on their dressage test, 5.6 points ahead of the rest of the field. “Comet,” a 16-year-old Thoroughbred gelding owned by Becky & her husband Tom Holder, is nearing the end of his upper level career so a top performance here would be a wonderful way to cap off his outstanding record. Holder is also in fifth place in the USEF National Advanced Horse Trials Championship on Can’t Fire Me, a 13-year-old Thoroughbred gelding owned by Phil & Melissa Town & Tom Holder, with a score of 30.7.

Sitting in second place are Jonathan Holling (Ocala, FL) and Downtown Harrison, an 8-year-old Trakehner/Thoroughbred gelding owned by Constance Holling. The pair earned a 29.3 for their nice, flowing dressage test. Holling won the Bromont CCI3* earlier this summer with Downtown Harrison and hopes to find that top form again here. The pair will head to the Boekelo CCI3* this fall with the help of a Land Rover Competition and Training Grant.

END_OF_DOCUMENT_TOKEN_TO_BE_REPLACED

William Fox-Pitt (GBR) today, 25th April 2010, went clear in the Show Jumping on the final day at the 2010 Rolex Kentucky Three-Day Event to crown his first win at ‘The Rolex’ with his starting dressage score of 42.8.

The top three final results were as follows:

Audio interviews with William Fox-Pitt, Phillip Dutton, Becky Holder, the press conference after Day Three with the riders, Rupert Bell ‘s live commentary on William Fox-Pitt’s Show Jumping round, plus an interview with Oliver Townend reflecting on his cross country day and attempt to win the Rolex Grand Slam, are also available to listen to, and download for free, on the links below:

Further news and details are available on www.rk3de.org and www.alltechfeigames.com