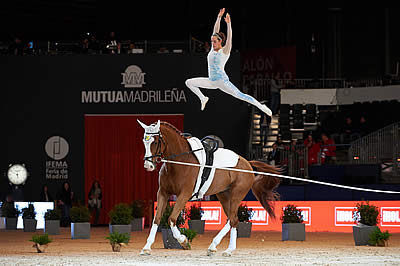 Lausanne (SUI), 26 November 2016 – Anna Cavallaro (ITA) and Lukas Heppler (SUI) got their FEI World Cup™ Vaulting 2016/2017 series off to the best possible start, storming to victory at the opener in Madrid (ESP).

The World Cup returned to Madrid Horse Week after its début last year to provide an incredible spectacle headed up with a top-class vaulting line-up, including multiple medal winners from past series.

Four horses for eight athletes made the journey to Spain’s capital, which meant that with only Cavallaro vaulting on her usual horse, quick adaptation was needed for the rest who had to perform routines to the highest standard.

Throughout the competition, the favourite Cavallaro proved untouchable, finishing on a final score of 8.423. In her first season with 10-year-old Monaco Franze 4, she showed that together they could be formidable lunged by Nelson Vidoni, who consistently gained horse scores in excess of 8.

Performing to Anastasia’s ‘Once upon a December’ under the lights of Madrid Horse Week, Cavallaro was able to show off her great strength and precision, evident in her effortlessly perfect split jumps.

Her dynamic freestyle showed her continuing growth in confidence with Monaco Franze 4, as she laid down the gauntlet for the female athletes going into the series.

Competing on borrowed horses, and with a short training day before the start of competition, four female athletes battled to the end. Switzerland’s Nadja Büttiker and Marina Mohar, who both borrowed 22-year-old Simbal, finished second (7.708) and third (7.593), with Isabel Fiala (AUT) placing fourth (6.810) after a tumble on day one from Royal Georg Alexander which impacted her final score.

“In Madrid the competition is wonderful, the organisation is fantastic and the arena is beautiful,” said Cavallaro after her win. “I really want to come back and compete at this competition next year.”

The top spot was closely fought between Switzerland’s Lukas Heppler and Germany’s Jannik Heiland. They both competed on Monaco Franze 4 – now recognised as one of the top scoring horses in the sport and in its first FEI World Cup™ Vaulting series – and were lunged by Nelson Vidoni.

Heppler’s artistic aspect of his performance, with strength moves constantly tight and soft on the horse, is one to watch this series as he develops his own unique style of vaulting. His final 8.535 score secured the Madrid qualifier.

Defending FEI World Cup™ Vaulting champion Daniel Kaiser (GER) once again teamed up with lunger Diane Fraser and Simbal, the combination that won the Madrid qualifier last year. His Houdini routine caught the eye of artistic judge Anita Flamand Prochaska (SUI), who awarded him 8.950 on the first day of competition, but after touching down after his dismounts he placed third with 8.176.

Thomas Brüsewitz (GER) rounded out the class finishing fourth competing on Dante lunged by Nelson Vidoni. Dante was a little unsettled as he entered the arena on the first day, but quickly acclimatised and allowed Brüsewitz to perform two tight routines to finish on 8.050. 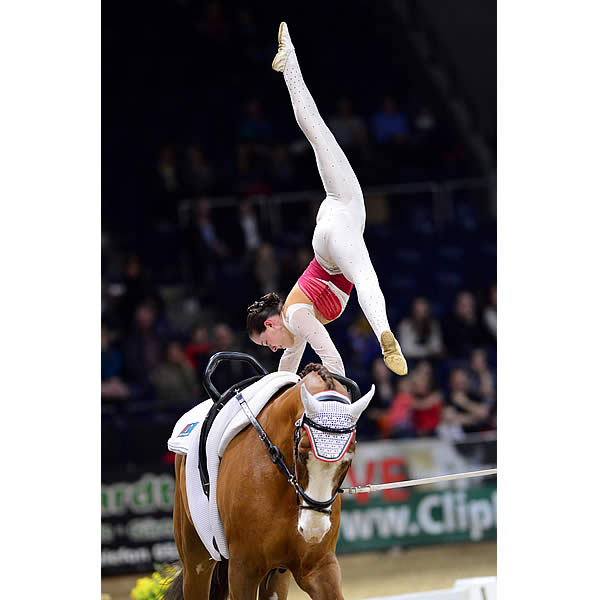 Andreani, vaulting on Carlos and lunged by Elke Schelp-Lensing, was crowned champion with 8,829 points, just 37 points ahead of Germany’s Thomas Brüsewitz, while Cavallaro on Harley lunged by Nelson Vidoni secured her first international triumph with 8,972 points, a healthy 304 points ahead of Switzerland’s Simone Jäiser.

A dream comes true for Andreani

Andreani, now 28 years old, fulfilled his dream of winning his first FEI World Cup Vaulting Final after coming close in 2011, when he was beaten in the second round by then World Champion Patric Looser (SUI).

However, his success was not without drama. Just two days before the Final, Andreani had to switch horses because his 16-year-old gelding Just A Kiss suffered an injury. His compatriot Ivan Nousse stepped in and they both vaulted on Carlos.

“I came to win,” Andreani announced assertively before the competition. He also wanted to give the packed arena an emotional performance. Personifying an eccentric painter, he did just that while demonstrating perfect gymnastic ability and style. “I am so happy,” he said at the press conference. After thanking Elke Schelp-Lensing (GER), he added: “Carlos is a fantastic horse. Vaulting on him was amazing. I am now focusing on the FEI Open European Vaulting Championships in Ebreichsdorf in Austria this August and the World Equestrian Games in Normandy next year, where I will have a brand new performance theme.”

Thomas Brüsewitz, who finished on 8,792 points, and third-placed Ivan Nousse, who was bronze medalist at the FEI World Vaulting Championships for Seniors in Le Mans last year and scored 8,591 points in Braunschweig, also performed impressively at the Final.

“This feels amazing,” said 18-year-old Brüsewitz. “In my first freestyle I had two mistakes. My mount on was not great, and also a jump was not clear. But in the second round I had nothing to lose, and I was able to concentrate better on the details of my movements.” Lunged by Irina Lenkeit on 22-year-old Airbus, a very experienced horse which competed at the Alltech FEI World Equestrian Games 2010 in Kentucky (USA), Brüsewitz showed his dynamism, strength and original handstand elements, which won rapturous applauds from the audience. “Thomas showed the full potential of his huge talent,” said German national coach Ulla Ramge. “He really impressed me with his ability to focus on the essentials at the right moment. We are very proud to have such a great athlete with a big future.”

Italy’s 26-year-old Anna Cavallaro was ecstatic after winning the third FEI World Cup Vaulting Final, following in the footsteps of Simone Wiegele (GER) who won the inaugural Final in Leipzig in 2011 and 2012 champion Joanne Eccles (GBR).

She was a clear favourite for Braunschweig, after taking the top spots at the qualifiers in Munich, Salzburg and Leipzig with 15-year-old Harley and lunger Nelson Vidoni.

With her virtually error-free and outstanding performance to the song “Time to Say Goodbye” by Andrea Bocelli, she comfortably won both rounds.

“After three wins I really hoped for victory at the Final,” said Cavallaro. “This success is very good for Vaulting in Italy – it really helps the sport when one vaulter wins such an important title.” One of the first people to congratulate her was Italian Equestrian Federation President Antonella Dallari. “My phone rings the whole time!” laughed Cavallaro at the press conference. “It’s a nice feeling to win. I hope to repeat it soon.”

Second-placed Simone Jäiser (SUI), lunged by her mother Rita Blieske on Luk, finished on 8,668 points after her burlesque-style choreography by Daniel Kenel to music by Christina Aguilera. Showing a huge number of elements – 22 in total with all transitions – and an impressive theatrical performance in a striking black and purple outfit, she really made an impression. “The FEI World Cup Vaulting is very important for our sport,” explained the 26-year-old from Zurich. “The series not only helps us to develop our skills as vaulters, but it also helps us to gain acceptance as a key equestrian discipline alongside the Olympic sports.”

Germany’s wild card Jennifer Braun, currently ranked second nationally and lunged by Verena Rosenkranz on Willow, finished on 8,477 points, beating off several international vaulters. “I can’t believe that this has really happened. My aim was not to be last, and in the end I have a podium spot! Now I’m hungry for more,” smiled the 20-year-old.

“We are delighted with the success of the FEI World Cup Vaulting Final here in Braunschweig,” said Löwen Classics Director Axel Milkau. “It was breathtaking to see what the vaulters were capable of, and everyone was very impressed. We should keep campaigning for this sport.”

“The vaulters, lungers and horses were clearly very well prepared for the Final and this resulted in outstanding performances,” explained Bettina de Rham, FEI Director, Vaulting, Driving & Reining. “We introduced a warm-up competition for the first time at this Final. This allowed the horses, lungers and vaulters to get used to the big arena and the public, and proved to be a winning formula. The arena was packed throughout the Final and the enthusiasm was incredible. Vaulting is getting the recognition it deserves and we are now looking forward to organising the next series.”

Andreani, vaulting on Radix SB and lunged by Patric Looser, won with 8,666 points, while Cavallaro was in a class of her own, finishing on 8,796 points to win by a massive margin and securing her third success of the current series on Harley lunged by Nelson Vidoni.

END_OF_DOCUMENT_TOKEN_TO_BE_REPLACED

Lausanne (SUI), 10 December 2012 – Anna Cavallaro (ITA) and Lukas Klouda (CZE), winners of the opening leg of the FEI World Cup Vaulting 2012/2013 series in Munich, both made it a double by claiming a second leg win in Salzburg (AUT) at the weekend.

The vaulters, both 28 years old, treated spectators at the Pappas Amadeus Horse Indoors event to dazzling freestyle-to-music rounds and their wins were greeted with great enthusiasm by the crowd.

Another one-two for Italian females

Italy’s eight-time national champion Anna Cavallaro and her 19-year-old training partner Silvia Stopazzini, Junior Champion in 2011, repeated their one-two finish from Munich at the second leg of this prestigious series with outstanding performances.

END_OF_DOCUMENT_TOKEN_TO_BE_REPLACED

At the top with Pavarotti

In the first round, Anna Cavallaro, performing on the 15-year-old Harley lunged by Nelson Vidoni, executed a high-level gymnastic routine which put her in second place. Her training partner and fellow Italian Silvia Stopazzini, also competing on Harley, took an early lead scoring 0,041 points higher than Cavallaro.