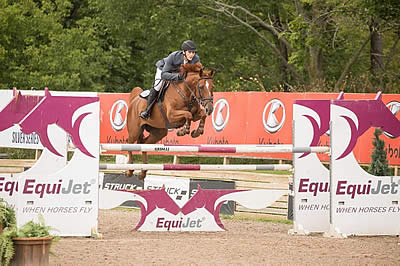 Ontario, Canada – Sept. 15, 2020 – The 2020 EquiJet $7,500 U25 Championship at Angelstone Tournaments has come to a close. Following three rounds of exciting competition, Mathieu Michot and Bretzelle D’Arthenay were named as the 2020 victors thanks to two top-three placings that pushed them to the top of the leaderboard. Split into three parts, the series classes took place July 23, August 21, and September 11, when top up-and-coming equestrians went head-to-head for a shot at the top title. After a successful 2019 partnership, EquiJet returned to Angelstone Tournaments in 2020 to continue its support of the younger generations of athletes in order to promote their budding competitive careers and offer travel opportunities that may have otherwise been prohibitive.

“This was such an exciting series! Congratulations to all participants. We are so happy to have been able to support the U25 classes this year at Angelstone Tournaments. Traveling to new, and sometimes quite far away, competitions is imperative for high-level equestrians as they kickstart their competitive careers, so we were pleased to have partnered with Angelstone to provide some equine transportation funds for our lucky winners. The future of the sport is bright, and we are proud to have a hand in supporting the next generation,” commented Bastian Schroeder, founder of EquiJet.

Laying down two rounds of quick and careful riding aboard her own Castello Z, Sammy Saunders emerged victorious as the first winner of the three-part series July 23, followed by a win for Lexi Ray and Jana Van D’Abdijhoeve on August 21. During the final installment September 11, Alexanne Thibault and Chacco Prime bested the field as the fastest of the 8-horse jump-off to capture the final class’s blue ribbon. Overall, Michot and Bretzelle D’Arthenay earned the championship distinction with the most cumulative points earned from a third-place finish in August and a runner-up spot in September. Thibault’s September victory pushed her into second place overall to claim the reserve championship.

Celebrating its tenth year, Angelstone has grown since its inception to showcase five competition rings that feature guaranteed perfect footing, including the Angelstone Main Stadium, a tournament ring unrivalled in Canada. Though COVID-19 forced Angelstone Tournaments to rework its schedule, its summer season still features six weeks of Gold-level competition between July and September for exhibitors of all experiences, in addition to seven weekends for its Silver Series. In 2019, nine FEI classes and more than one million dollars in prize money was offered, making the venue a true destination for competitors up and down the East Coast of North America.

Rockwood, ON – July 17, 2013 – As the summer show jumping season shifts from Alberta Eastward to Quebec and Ontario, preparations are underway at Angelstone Tournaments. Three weeks of equestrian competition in August will be highlighted by one of the East Coast’s most anticipated events of the season, The Champions Grand Prix, presented by Eric Lamaze on Saturday, August 24th.

“In conversations with Eric Lamaze, it became clear that we shared a vision of launching an annual marquee event in Ontario that would attract a field of top-notch competitors. The Champions Grand Prix is our vision come to life,” said Angelstone President Keean White. “We are grateful to Eric for his collaboration on The Champions and for lending his support to an event that we hope will grow into one of the most prestigious titles on the North American competition circuit.”

The Champions Grand Prix will be held on Saturday, August 24th at 6:00pm, at Angelstone, one of North America’s newest show jumping destinations. Riders will compete for both FEI World Ranking Points and a $100,000 purse, the largest offered in the province of Ontario. Located near Rockwood, Ontario, less than hour’s drive northwest of the city of Toronto, the facility is an easy trip for spectators looking for a fun time for the entire family. Admission for The Champions will be free to the general public, making the event truly inclusive and accessible, integral to Angelstone’s priority of raising the profile of show jumping to a wider audience within the surrounding region.

Additionally, Lamaze will be leading a unique clinic experience on the previous evening, Friday, August 23rd. The event will provide a rare opportunity for the equestrian community to gain valuable insights into Eric’s approach to riding, while allowing the Olympic Individual Gold Medalist to give back to the country’s next generation of talented riders and enthusiasts. The clinic is open to the public, and all proceeds will benefit Angelstone’s Commitment to Educate Scholarship Program, supporting the post-secondary dreams of the area’s young people.

Angelstone Tournaments’ August series will feature the Ottawa Launch Event in Rockwood from August 7th to 11th and The National Phase I and II, August 21st to 25th and August 28th to September 1st. Each week will feature main events on Thursday and Saturday nights starting at 6:00PM.

Spectators are encouraged to visit the venue’s website at www.angelstone.co for more information on attending the Grand Prix events this August.

Founded in 2010, Angelstone has grown into one of the East Coast’s pre-eminent equestrian parks, showcasing world-calibre hunter, jumper and dressage competitions over nine weeks.  Located in the picturesque countryside, Northwest of Toronto, the facility attracts thousands of spectators from across North America, making Angelstone one of the most visited sporting venues in Southwestern Ontario.  For 2013, the venue will host up to a thousand horses during each competition week, offering a prize purse exceeding one million dollars.

In his Olympic debut in 2008, Eric won the Individual Gold Medal riding the great Hickstead and helped Canada capture the Team Silver. These remarkable achievements represent the greatest success ever of the Canadian Equestrian Team at the Olympic Games. At the end of the 2008 year, Eric became number one in the Rolex World Rider Rankings, a feat he has since repeated on numerous occasions.

With Hickstead, a stallion small in stature but huge in heart, Eric won countless grand prix events in some of the most impressive show jumping venues in the world. At both the 2007 and 2011 editions of the Spruce Meadows “Masters” Tournament, Eric and Hickstead won the $1 million CN International, the richest grand prix event in the world. Before his tragic death at the Verona horse show in November of 2011, Hickstead won several major grand prix titles including Geneva (2008), Aachen (2010), La Baule (2011), and Rome (2011). Partnered with Eric since he was seven years old, Hickstead won more than $3.75 million (Canadian) in prize money during his career and was widely acknowledged as the best show jumping horse of his era.