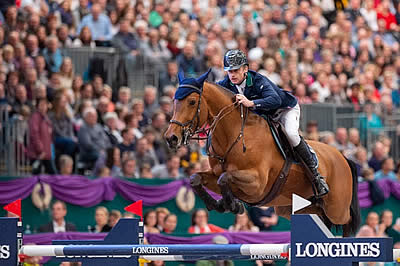 Wellington, FL – January 19, 2020 – Great Britain’s Emily Ward, 20, made a splash in the Under 25 division at the Winter Equestrian Festival (WEF) by winning the $25,000 Hermès Under 25 Grand Prix CSI2* riding Millioninmind on Sunday, January 19, at the Palm Beach International Equestrian Center in Wellington, FL.

Fifty-five horses challenged Oscar Soberon’s (USA) opening track with 19 returning for a deciding jump-off. After winning the Hermès Under 25 Welcome just a day earlier, Ward wasted no time in establishing herself as the one to beat this season. She and Millioninmind, owned by Steven Barnes, stopped the clock in a quick 35.99 seconds over second-place finisher Sydney Shulman’s (ISR), who finished in a time of 36.18 seconds riding Jill Shulman’s Azilis du Mesnil.

“I’ve actually never competed in America before, but I am off to a great start,” said Ward, 20, who rides for Canadian Tiffany Foster’s Little Creek Equestrian. “We’ve owned Millioninmind since he was six years old, so we’ve had him quite a long time. He took me on my first senior Nations Cup team, and won my first international grand prix with me. Now, he has come over here and flourished.”

Andrew Welles rode Brindis Bogibo, a 14-year-old Dutch Warmblood gelding, to best a field of 67 and win the $37,000 CaptiveOne Advisors 1.45m Classic CSI2* to close out the day in the International Arena at WEF.

Speed and strategy were in tall order as Welles guided his mount through a 13-horse jump-off to stop the timers at 36.58 seconds for owner Itasca Group LLC.

“This was my horse’s first week competing this year, and I wanted to make it a point to improve on jump-offs coming into the season,” said Welles. “My plan was to give it our best shot. He was really in tune with the course today and I give him a lot of credit, he felt great out there. Especially in the jump-off, he was fully engaged going from jumps two to three where I left out a stride and his focus continued throughout the rest of the course.

“He is actually a horse that has been in our lives for four and a half years,” continued Welles. “But he was recently sold and then, thanks to the Razbeck and Hogan families, we were able to buy him back for me to ride. It’s been really special to have him back in our lives.” 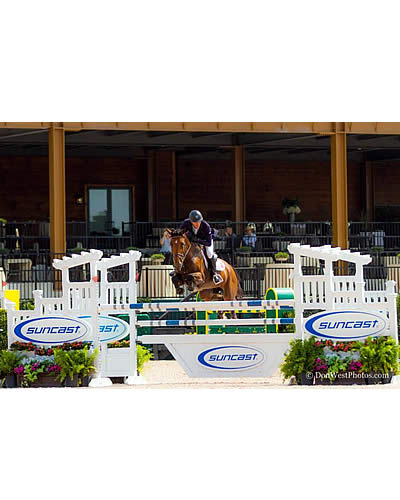 Mill Spring, NC – June 25, 2015 – The $34,000 Suncast® 1.45 FEI Welcome boasted the largest number of entries in the FEI division at Tryon Summer 1 to date, with 43 combinations testing the Ken Krome (USA) designed track in the George H. Morris Arena in the Tryon Stadium. The class, which started off the second day of competition at Tryon International Equestrian Center (TIEC) this week, was moved to the morning to help the FEI contenders escape the on-setting heat.

Andrew Welles (USA) and Boo Van Het Kastanjehof paid no mind to the increasing temperature and secured the win as the last pair to go in the 10-horse jump-off with a dominating time of 35.006 seconds. Mark Bluman (COL) and Uitteraard finished in second, crossing the timers in 35.842 seconds and Alise Oken (USA) aboard Kaid Du Ry rounded out the top three, completing the jump-off track in 36.276 seconds. FEI competition is highlighted at TIEC with the $127,000 Adequan® Grand Prix FEI CSI 3* on Saturday, June 26, with gates opening at 6pm and competition beginning at 8pm.

Welles was thrilled with the duo’s win and said “Boo” has been knocking on the winner circle’s door for quite some time now. The pair went last in the jump-off order following an incredibly quick round from Mark Bluman, which Welles didn’t anticipate beating.

“I’m absolutely overjoyed right now. I’ve had her for five years and probably been second in eight or nine Grand Prix classes, but we’ve never actually been able to pull off the win,” commented Welles. “I’ve never won a Grand Prix on her, and today is just a great start to the morning! I watched the first couple go and I saw Mark’s time and I thought I was riding for second. He was absolutely flying, and he rode as slick of a round as he could ride. I knew we were fast and to see that come up on the scoreboard was amazing.”

The course perfectly suited the pair, who typically excel in tight situations and have performed incredibly well during their time at TIEC, collecting a fourth place finish in the $210,000 Tryon Grand Prix for the Governor’s Cup presented by Rolex in Week 8 of the Tryon Spring Series.

“Ken Krome has been a great course designer for a very long time and I thought he built a very fair test and I think all of the horses will come out jumping just as good, if not better, than when they went into the ring,” commented Welles. “It was a great jump-off track and there were a lot of options. There were a lot of places to go fast and a lot of places where you could accumulate faults if you pushed the speed that way.”

Welles rode a risky and bold round in the jump-off, knowing that there were several areas around the course he could use to his advantage, which ultimately helped him slip into the coveted top spot.

“To be honest, I was fortunate to go last in the jump-off, and I think that’s where a lot of our second place finishes have come from. We always seem to have that happen and then someone catches me at the end,” he explained. “I talked to my friend John Roche before going in and he said, ‘If you do this, this, and maybe this, there’s a chance you can catch him,’ so I went for it.”

“Boo” has been a career altering horse for Welles, who attributes much of his success to the lessons he has learned from the 2001 Belgian Warmblood mare, owned by his father, Peter Welles.

“She’s just one of those horses that you will remember for your entire life. She, as of now, is absolutely the most important horse that I’ve ever had in my career and I think she will be for many years to come,” he remarked. “She’s a horse that I absolutely love to death. She’s a part of the family and my parents have been incredibly supportive of my career. In the barn she knows she’s in charge. It’s her barn and we all work for her.”

Welles’ team has called TIEC home for several weeks and he is planning to keep the venue as a staple in their competition schedule for years to come. Based in Kentucky, the trip is worth it according to Welles, who commented he’s never seen his horses so content at a competition.

“This facility is absolutely amazing and I think that just going into the ring, each of us feel so fortunate to have the opportunity to compete at a facility of this caliber and I personally want to thank Mark Bellissimo, Roger Smith, and the entire team for putting this show on,” he said. “I know it’s unseasonably hot and I want to thank J. P. Godard and the rest of the crew to make the decision to allow us to go at 8am. My horses are so relaxed and it has been an absolute pleasure to compete here.”

Tryon Summer 1 will continue with FEI competition hosting the first of four consecutive ‘Saturday Night Lights’ competitions at TIEC on Saturday, June 27, with the $127,000 Adequan® Grand Prix CSI 3* with gates opening at 6pm and competition beginning at 8pm. For more information on TIEC and for a full list of results, please visit www.tryon.com. Please “Like” the TIEC Facebook page at https://www.facebook.com/pages/Tryon-International-Equestrian-Center to be eligible for various contests and promotions.

Zionsville, IN – August 10, 2012 – The 2012 Traders Point Hunt Charity Horse Show and Country Fair continued on Friday with cooler weather and a momentary, passing shower. The horses were feeling fresh and ready for competition at Wild Air Farms in Zionsville, IN.

Exhibitors and guests enjoyed the annual Paws to Applause dog show mid-day and exciting show jumping action in the jumper arena and the Russell Fortune Arena all day long. The coveted $30,000 Mr. and Mrs. Russell Fortune Jr. Memorial Grand Prix, held at 5:00 p.m. was the highlight of the day and filled the tents around the grass arena with cheering crowds.

“We’ve got a pretty good field tonight, we have faces – plenty of folks who are ready,” said course designer, Phil DeVita. “The course this afternoon is along the same theme that we’ve been doing all week.”

“I’m kind of a serpentine guy,” continued DeVita. “I don’t do a lot of technical straight-line distances. I tend to keep turning you and bending you and making you steer and make you stay in control.