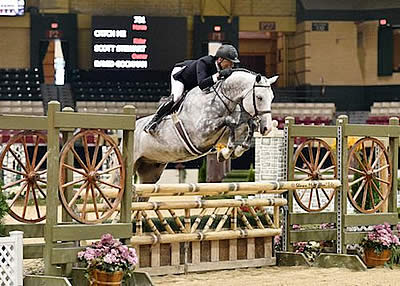 Scott Stewart and Catch Me. Photos by Shawn McMillen Photography.

The $25,000 WCHR Pro Challenge had 33 entries, and 12 were called back for the second round. Stewart and Catch Me, a nine-year-old Holsteiner gelding by Casiro owned by David Gochman, set the scores to beat in the first round with judges’ scores of 95, 93, and 92 for an average of 93.33.

While Stewart, of Wellington, FL, has been in plenty of pressure-filled situations, returning for the second round tonight gave him some trepidation. “It’s always hard coming back,” he acknowledged. “The first round felt great too, then trying to have to do it again… then I saw John [French] go, and he had such a good round, so I knew it had to be just as good.”

Luckily, Stewart was sitting on Catch Me, a horse he calls “one of a kind”. They returned with judges’ scores of 95, 96, and 95 for a second round score of 95.33 and a total of 188.66. They would finish more than nine points ahead of the second place finishers.

“I thought that that was probably one of the best rounds that I’ve ever had on any horse,” Stewart revealed.

For their win, Stewart and Catch Me were presented with the Little Brook Farm Perpetual Trophy, donated by Gary Duffy.

“It feels awesome,” Stewart said of his win. “He tries so hard. Even though he’s a little bit tired, he went in there, and he really tried. I think even from round one, the scores seemed higher than they’ve ever been for everybody (in the class). It seemed like it was a good class, so it means a lot to be able to do that. It’s all the horse really. That’s a special horse. There’s not too many like him. He’s a mover, he jumps great, he’s so nice to ride. It’s easy. He’s just phenomenal.”

Last year’s win was a special one for Stewart as Catch Me had recently returned to the show ring after a life-threatening illness. This year, he felt more prepared and ready to go for the win.

He noted, “I think he’s even stronger this year, physically. He was good (last year), but he started to get better, better, and better. He was a little bit greener at indoors last year. He was very good here, but this year he’s even more relaxed. It feels like he has even more jump.”

Stewart thanked the Gochman family for the opportunity to ride such a special horse.

Amber Henter of St. Petersburg, FL rode to the top of the Developing Pro Challenge, sponsored by the John R. Ingram Fund, with two solid performances on Si Bene, a nine-year-old gelding owned by Findlay’s Ridge Group. In recognition of their win, Henter and Si Bene received the Bittersweet Trophy, presented by Rachel Kennedy.

Henter, who is just 24 years old, has been training with and riding for Findlay’s Ridge and Val Renihan for just over a year in her first job as a professional. Her main ride has been Si Bene, who competes in the First Year Green Hunters. This was Si Bene’s first indoor horse show, and the first big competition for Henter, who graduated from the University of South Carolina and rode for the equestrian team.

“I’d first like to say how much I appreciate [Val], and all that she’s done for me,” Henter said. “She couldn’t be here tonight (because) she’s getting ready for USET Finals. We’re really missing her tonight, but I know she would have done anything to be here. It’s been a crazy year, but I’ve learned a lot, and I’ve gotten back into things. It’s really nice. Since Val wasn’t here, I’d like to thank Louise Serio for helping me.”

Henter did not have it in her original plan to compete in the Developing Pro Challenge because she “hadn’t ridden that much.” She explained, “Last year was my first time going to indoors in five years, and not competing, I was just training. I knew about the class and I was like, ‘You know what, I might as well give it a try.’ He just showed in the First Year division, and he’s the only one that I showed this week. I know him so well, so I was really hoping that we’d have a great outcome just because he deserves it all the way. We’ve kind of been teetering in the ribbons all year. I feel like he finally got his recognition this week.”

Leading the class and returning on top was “definitely a little nerve-wracking,” she admitted. “I haven’t had pressure on me in a while. I knew everyone was counting on me no matter how I did, so it was nice. It was a good feeling going in the ring knowing that it was okay to make a mistake, but if I didn’t that was even better.”

She said of her victory, “I think that tonight was a big step in my career and in feeling confident moving forward, knowing that I can be successful. Hopefully I will keep on track and keep pushing forward. We have Harrisburg next week, and I’d really like ‘Zip’ to get a nice show in. I just want to keep moving forward off of that.”