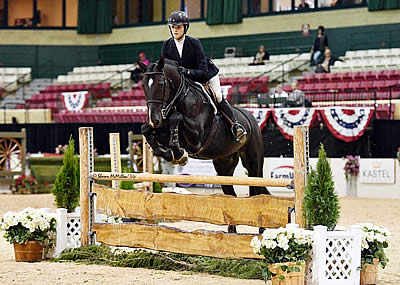 At the end of the first round of competition, Strauss and San Remo VDL sat in third place with a score of 89.08 while Emma Kurtz of Hudson, OH and Clearway held the lead with a score of 91.33.

The top 20 returned in reverse order of their standings for a second round, and Strauss’s second round score of 91.33 quickly shot her to the top of the leaderboard with an overall score of 180.41.

Sophie Simpson on You Wish, owned by Ashland Farms, and Kurtz and Clearway, owned by Dr. Betsee Parker, were the final two to return, and while both would execute strong rounds, neither would match Strauss’s performance. A second round score of 88.33, coupled with her first round score of 90.00, would give Simpson a 178.33 total to keep her in the second-place position. With a score of 84.33 in the second round, Kurtz would finish in third with a 175.66 total.

While the judges had the option for additional testing of the top four, a greater than two-point difference between Strauss and Simpson meant that the courses set by Krome had done a well enough a job of differentiating the top riders and no additional testing was necessary.

“It is a really fun equitation final to do the courses for,” Krome said. “The format is the best, where every rider is scored. Having two rounds and having the top twenty to come back really allows me to vary the tests and to do interesting things in the second round. My goal is to help the riders improve this week. This is leading up to [the Pennsylvania National Horse Show], so you’re trying to prepare them for that and present them with enough good challenges so that they learn some things that they can brush up on before the next finals.”

Strauss finished second in last year’s Private Tutoring Services North American Junior Equitation Championships riding Canterbury, so being able to come back and earn the win this year on a new mount, San Remo VDL, was particularly exciting for Strauss.

“I’m so happy,” said Strauss, who trains for the equitation with Stacia Madden at Beacon Hill Show Stables. “I was so fortunate to ride San Remo in this class. He is just so perfect. This was actually only my third show on him. Stacia of course knows him really well, so she has been able to help expedite forming a relationship process. He does everything I ask of him, literally; I couldn’t have asked more of him today.”

San Remo VDL was ridden to great success, including the win in the 2012 Washington International Horse Show (WIHS) Equitation Final, by owner Elizabeth Benson, and the horse has had a special place in the hearts of the Benson family and Madden since.

“He’s kind of a part of [the Benson family],” Madden explained. “We decided after the Devon Horse Show last year that we were really going to try to teach him how to turnout properly and give him some appropriate time off, which he had never had because he was a little bit of a social misfit.”

After enjoying a year of turnout and relaxation at John and Beezie Madden’s farm in New York, San Remo VDL returned to Beacon Hill this summer, but Madden did not have a particular rider in mind for the 16-year-old Warmblood gelding.

“I was hoping for a good rider for him to come down the pike,” Madden said. “Katherine had three top equitation horses; she wasn’t really on my radar at that point. Then one of her equitation horses is actually going to get the San Remo treatment and is going to be out in John and Beezie’s field, so I talked to her and her parents about seeing if they would be open minded to leasing her San Remo. They’re so great and want Katherine to be in this sport and want her to be in it as well as she can be. So they said absolutely.”

The Private Tutoring Services North American Junior Equitation Championships presented the pair with the perfect opportunity to come together for a major equitation final and to further prepare for the remainder of the indoor season.

“It’s great preparation for the rest of the finals,” Strauss said. “You sort of have the outdoor classes to warm you up and then transition you for the indoor classes. It’s great to just practice riding under pressure with this championship format.”

Strauss continued, “Obviously this is our first show indoors, so you have to start thinking a little bit more quickly. All of the jumps were sort of right off the edges of the ring and everything came up a little bit quickly. One thing that Stacia’s really helped me with, and that I started working on with her last year, is thinking more quickly when you start riding inside and being ready for everything to come up quickly. Stacia sets up extremely difficult courses at home at Beacon Hill. I think that really prepared me well. Taking everything that I learned with Stacia at indoors last year and applying them to today has helped.”

Aureliano, who trains with Andre Dignelli and Patricia Griffith at Heritage Farm, scored an opening average score of 86.50 to put her in fourth place heading into the second round, which welcomed back the top ten riders.

“The first round, I loved the course,” Aureliano said. “There weren’t any mishaps or anything. It was just a nice smooth round. I was happy about it because I knew that I was in the top ten, so I was glad that I had a nice first round.”

After scoring a 90 in the second round, Aureliano climbed up the leaderboard into second place with a cumulative score of 176.50. That put her just behind Camryn Halley of Oviedo, FL on Renoir, who held the lead in both the first and second round with scores of 88.25, 89.66, and a cumulative 177.91.

“The second round, I was a little nervous going in, because I knew that if I wanted to accomplish my goal to win the THIS, I needed to step up my game a little bit,” Aureliano said. “It was a little bit of a challenge for me, but I really liked it.”

With less than two points separating them, Aureliano and Halley were called back for additional testing. The test required riders to canter directly to a triple bar, then take a trot fence off a bending line before rolling back to a two-stride line, halting, and finally demonstrating a counter canter over a last vertical. With a seamlessly executed test it was Aureliano who rose to the top of the list and clinched the win.

“I can’t even explain my feelings right now,” Aureliano said immediately following her victory. “I’ve been working so hard to accomplish this goal, and it was just accomplished!”

Aureliano has been training with Heritage Farm for the last five years, but she is somewhat unique in that her horses are kept at home a little more than an hour away from the Katonah, NY based farm.

“She and her mother are a good team, and they’re real workers,” said Patricia Griffith.

“They work hard, and Alexa’s very thankful to have the supportive mother driving the truck and trailer up for every lesson and taking care of the horse and grooming at most horse shows. It always seems to be the harder you work, the luckier you get. That’s definitely a motto that I like to live by. With her that proves to be true.”

In the North American Adult Amateur Equitation Championships, it was Allison Fithian of Monterey, CA who was victorious riding her longtime mount Lucky D’ Etenclin.

Fithian led through both rounds and won by an impressive margin of more than 11 points after earning scores of 88.83 in the first round and 91.00 in the second for a 179.83 total.

For the New York University (NYU) graduate, competing Lucky D’ Etenclin at Capital Challenge is a happy reunion and, as trainer Stacia Madden explained, like taking care of “unfinished business.”

“She has a chemistry with this horse that is just second to none,” Madden said. “I felt a little bit bad for her in her last junior year because he got a little bit injured. She was third at Medal Finals that year which was unbelievable. Then she had to use a different horse for Maclay Finals.”

“I got him back this year to ride him, so it’s really just so special to come back and bring it all together!” Fithian said.

Fithian has her sights set next on the Ariat National Adult Medal Finals on Friday, October 7, at Capital Challenge.

Finishing in second was Helen Voss of Versailles, KY on Prosecco 24. Voss earned scores of 84.00 and 84.66 for a 168.66 total. Finishing just half a point behind Voss for third were Tracey Gorin-Byrne and Sunman with a first round score of 84.33 and a second round score of 83.83. 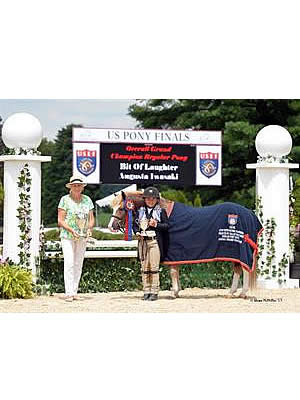 Lexington, Ky. – The US Hunter Pony Championships presented by Sallee Horse Vans came to a close on Saturday at the Kentucky Horse Park. Medium Regular Hunter Ponies went to task in the Walnut Arena in their Over Fences phase to determine the 2015 Champion. Alexa Aureliano and Woodlands Stevie Ray emerged victorious on Saturday afternoon, but it was Thursday’s champion, Bit of Laughter, that proved unbeatable as he was named the 2015 Grand Champion Hunter Pony.

National titles are determined in the hunter championship following three phases of competition, with Model and Under Saddle phases each counting towards 25% of the overall score, and the remaining 50% being determined by the Over Fences phase.

Aureliano (Old Brookville, N.Y.) and Hannah Bernstein’s Woodlands Stevie Ray scored the National title with an overall score of 1000.34. After earning 238.32 in the Model phase and 255.78 in the Under Saddle phase, she and the 11-year-old Welsh Pony Cross gelding climbed from 10th place to the top of the leaderboard with a score of 253.12 in the Over Fences phase.

“It feels amazing,” Aureliano said of winning the Championship, her first title in the four years she has been attending the US Pony Finals. After fine tuning their partnership through the summer, the pair peaked at the right time. Commenting on today’s course, Aureliano explained that “it was really, really fun. It’s really nice and smooth; it’s just right out of stride.”

The Reserve Champion title went to Devin Seek (Ocala, Fla.) and Heaven’s Sake with an overall score of 992.07. She and Bibby Hill’s 12-year-old Warmblood gelding received scores of 252.48 and 253.19 in the Model and Under Saddle phases, respectively. The pair’s Over Fences phase garnered a score of 243.20 on Saturday.

Mia Wayne (Clarkston, Mich.) and her own Oliver Twist finished third in the Medium Regular Hunter Pony Championship with an overall score of 987.95. On Friday, she and the eight-year-old German Riding Pony gelding scored 241.89 in the Model phase and 235.54 in the Under Saddle phase. The pair climbed an impressive 50 places on the strength of their Over Fences performance, which scored 255.26 and earned them first place in the phase. The pair also claimed the Champion Owner/Rider title for the division.

The Best Turned Out Pony in the Medium Regular section was Vermont Ruby Fox, ridden by Jenna Drago. The Best Presented Model Pony was awarded to Woodlands Love Story, ridden by Brittany Bardwell.

The US Pony Finals will conclude Sunday with the Marshall & Sterling/US Pony Medal Finals on Sunday at 7:00 a.m. ET in Alltech Arena. The USEF Network will live stream the coveted championship, courtesy of the USHJA Foundation.

For live scoring, results, schedule, and competitor and hospitality information, go to www.usefconnect.com.

To learn more about the 2014 US Pony Finals, visit www.ponyfinals.org.