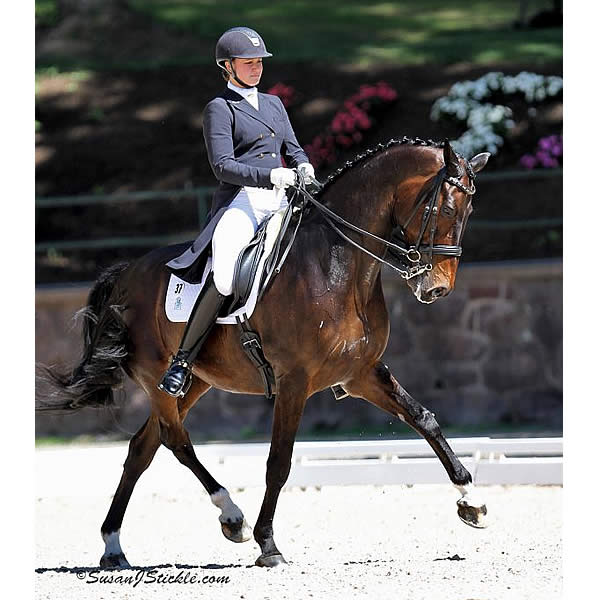 The grants were awarded so that the horse and rider combinations could compete in CDI shows throughout Europe in preparation for the 2014 Alltech FEI World Equestrian Games (WEG). Criteria for the grants included international competition experience and the athletes’ prospects of contributing to a Team or Individual medal at the 2014 World Equestrian Games.

“We are planning a winter tour in Europe with Wizard, basing out of (and training with) Klaus Balkenhol and competing in three CDI competitions while there,” Lyle said. She added that plans are not finalized and invitations are not yet issued, so she could not be specific at this time.

“This USEF grant, in addition to the amazing Carol Lavell grant we received earlier this year, has made my goal of getting back to Europe possible,” Lyle continued. “Without this kind of support it would be nearly impossible for many of us riders to pursue our dreams of international competition, and I am so thankful to all the donors and amazing people who make these things possible!”

Lyle and Wizard, a 14-year-old bay Oldenburg gelding, recently received a $25,000 Carol Lavell Advanced Dressage Prize from The Dressage Foundation to continue their training. The team trains with Olympic athlete Debbie McDonald and Lyle is based out of Ketchum, Idaho.

Wellington, FL – February 7, 2013 – U.S Olympic athletes Adrienne Lyle and Wizard will travel to Europe this summer to train with the legendary Klaus Balkenhol, thanks to a $25,000 Carol Lavell Advanced Dressage Prize awarded by The Dressage Foundation.

Lavell, along with her friends and family, initially funded the prize in remembrance of her parents, May and George Cadwgan. Lavell is a Bronze Medal winner in team dressage at the 1992 Barcelona Olympic Games and knows first-hand what it’s like to scrimp and struggle to make ends meet in order to make it to the top.

END_OF_DOCUMENT_TOKEN_TO_BE_REPLACED

In Saturday evening’s freestyle, Vilhelmson-Silfven and Don Auriello, an 11-year-old bay Hanoverian gelding owned by Lovsta Stuteri, rode the momentum from an enthusiastic crowd to claim the championship. Vilhelmson-Silfven collected a personal best score of 84.075% for her electrifying freestyle performance. She received a standing ovation from the crowd as she exited the ring.

“It’s just such an honor to ride a horse like Don Auriello,” she said. “He is so fun to ride. He was enjoying himself with me, enjoying the time, enjoying the energy. It was a great atmosphere.” She credits the Florida dressage circuit as a catalyst for the horse’s development. “Florida’s been very important for Don Auriello,” she said. “He has done a lot of his best starts here, I think.”

END_OF_DOCUMENT_TOKEN_TO_BE_REPLACED

Wellington, FL – January 10, 2013 – Phelps Media Group International is pleased to welcome new client, Adrienne Lyle. Lyle, one of the foremost young dressage riders in the United States, is coming off of a breakthrough year of competition, highlighted by a trip to London to represent her country at the Olympic Games.

Earlier in their career, Lyle and Wizard won the 2008 Brentina Cup, named in honor of the famous dressage mare ridden by Debbie McDonald, Lyle’s coach. Lyle began riding with McDonald in 2005 as a summertime working student. Her efforts over the summer led to a full-time position at River Grove Farm, where McDonald is based. Lyle picked up the ride on Wizard in 2006. Following their Brentina Cup victory, they competed in their first Grand Prix test in 2009.

END_OF_DOCUMENT_TOKEN_TO_BE_REPLACED

Young American Athlete Is One to Watch

Sandy, UT (July 13, 2012) – Adrienne Lyle is living the American dream; from simple beginnings riding western on her parents’ cattle ranch, Lyle is now a top dressage competitor and is headed to the 2012 London Olympics on Parry and Peggy Thomas’ 13-year-old Oldenburg, Wizard.  Under the tutelage of American Olympic dressage icon Debbie McDonald at River Grove Farm in Hailey, Idaho, the duo rose through the ranks of competition over the past three years, paying their dues and perfecting their Grand Prix performance.  After a very impressive ride at the 2012 Festival of Championships at Gladstone, Lyle and Wizard earned themselves a spot as individuals on the US Olympic Dressage Team, and will head to London to represent the United States and reap the benefits of their hard work.

“Adrienne is an inspirational rider and a true American athlete,” said Heidi Zorn, President of Premier Equestrian, a company that sponsors Lyle.  “We are proud to be supporting Adrienne and Wizard as they exemplify the talent, perseverance, and sheer dedication that our country has been built on, and that continues to make the United States great.  Premier is also based in the United States and supports American suppliers and products, so it was only fitting that we support an American rider.  We know Adrienne and Wizard will represent us and our country well in London.”

END_OF_DOCUMENT_TOKEN_TO_BE_REPLACED

Wellington, FL – March 31, 2012 – Adrienne Lyle and Wizard returned to the stadium spotlight and danced away with the win in the FEI Grand Prix Freestyle during the Global Dressage Festival (GDF) at the $120,000 5* West Palm Beach, presented by Diamante Farms on Friday evening.   Their score of 77.275% placed them well above the competition and earned prize money totaling $25,200.  Ashley Holzer of Canada on Breaking Dawn was second with 74.000% and collectd $15,360.  Anja Plonzke of Germany on Le Mont d’Or received 73.600% and $12,000 for third.

Lyle, 27, an assistant trainer for Debbie McDonald at Peggy and Parry Thomas’ River Grove Farm,  has the daily riding and training of Wizard (Weltmeyer-Pica, Classiker) and is very pleased with the way her charge is progressing.

END_OF_DOCUMENT_TOKEN_TO_BE_REPLACED

Lyle works as an assistant trainer for Debbie McDonald at Peggy and Parry Thomas’ River Grove Farm.  She and McDonald brought six horses for the Florida winter, among them Wizard (Weltmeyer-Pica, Classiker).  Lyle was given the ride on Wizard because her height was a better fit with the gelding. “Debbie is tiny and Wizard is huge so she said, ‘Why don’t you try him?’ And we just clicked,” Lyle said of the 13-year-old Oldenburg gelding.

END_OF_DOCUMENT_TOKEN_TO_BE_REPLACED

Wellington, FL (March 21, 2012) – Dressage rider Adrienne Lyle has had great success with Peggy Thomas’s Oldenburg gelding Wizard, and during the Wellington Classic Spring Challenge Lyle rode into the winner’s circle on her up-and-coming young horse Accolade. A Dutch mare also owned by Thomas, Accolade is poised to make a statement on the national scene as she is not only a talented mare but is the half-sister of the legendary Brentina, owned by Thomas and ridden by Lyle’s trainer Debbie McDonald.

Lyle and Accolade won the USEF Fourth Level Test of Choice with a score of 70.714%, and also took home the World Development Group Award, sponsored by the World Development Group, a premier developer of the Equestrian Lifestyle. “Accolade and Brentina have the same dad, Brentano II. Accolade is a little more of a modern type with a ton of scope and a lot of athletic ability. She and Brentina are very similar in personality and temperament, which is very fun. Accolade is a very special mare,” Lyle said.