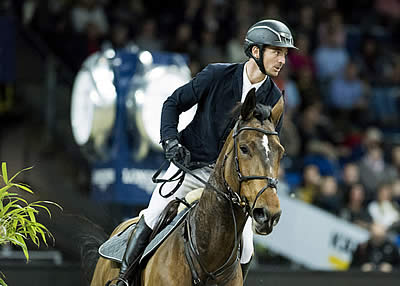 Lausanne (SUI), 2 January 2019 – Steve Guerdat, the Swiss star who took individual Jumping gold at the London 2012 Olympic Games, has reclaimed the world number one slot in the Longines Rankings.

The 36-year-old, who was previously 140 points off the lead in second place behind Harrie Smolders, has now jumped ahead of the Dutch athlete with a 55-point advantage in the rankings published today by the FEI.

The four-time Olympian last topped the world rankings in November 2012 and his return to the number one slot, on 3,050 points, follows a series of impressive results last month, most notably an emotional victory in the IJRC Top 10 Final on home turf at Geneva.

Individual bronze medallist at the FEI World Equestrian Games™ Tryon 2018 last September, Guerdat also leads the Longines FEI Jumping World Cup™ Western European League standings and will be aiming for a third victory in the seasonal Final at Gothenburg (SWE) in April after back-to-back wins in 2015 and 2016.

Germany’s Marcus Ehning, fourth in the rankings published at the beginning of December, has now switched places with McLain Ward (USA) to sit third on 2,936 points, 59 adrift of Smolders and just 16 clear of Ward. European champion Peder Fredricson (SWE) remains fifth on 2,815.